What is in Worcestershire Sauce and Why is It Called That? 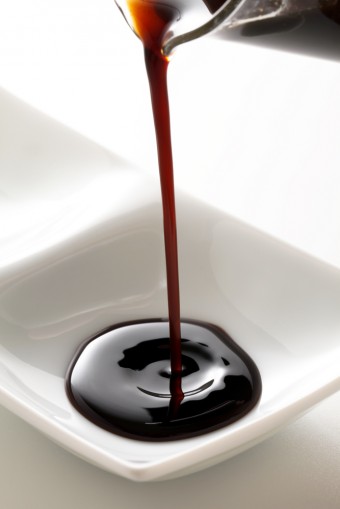 Worcestershire sauce, sometimes known as “Worcester sauce” is a savoury sauce that is often added to meat and fish dishes or, if you like your alcoholic beverages, the Bloody Mary cocktail. It may (or may not depending on how much you research your sauce choices) surprise you to learn that it’s literally made from fermented fish and spices.

Yes, when you order a Bloody Mary, you’re pretty much asking the guy behind the bar to pour aged fish juice into your vodka. It probably won’t surprise you that Worcestershire sauce is English, because of course rotted fish sauce is English. “Rotted fish sauce” is possibly the most English phrase ever typed on this website- and I should know, I’m English.

The sauce is made from anchovies fermented in vinegar, if that sounds disgusting, we’re just getting started. After around 18 months (yes, months) the anchovies should hopefully be fermented enough to be little more than a fishy purée. When they have the purée, they then throw in garlic, onions, chilli peppers, salt, sugar and a big ol’ pile of “natural flavourings“.

After they have this mixture, they either add water and bottle it, or ship off the concentrated fish paste mixture in big barrels so other people can add water to it.

If you’re wondering what those natural flavourings are, even though the main ingredient is literally year old rancid fish, Lea & Perrins and later, Heinz after they bought L&P, have never revealed the exact mixture they use.

This is, of course, probably more to do with the fact that someone else could steal their recipe and make their own sauce than people thinking the mixture was disgusting(er). However, according to rumours and rumblings that have happened over the years, lemons, soy sauce, pickles and something known as “devil’s dung” are all supposedly used, because of course “dung” could only improve the flavor of vinegar and congealed fish remains.

As for why the mixture is called, “Worcestershire sauce” that’s a decidedly much simpler issue- it’s because the sauce- most likely adapted from recipe from India- was originally made in the English city of Worcester around 1840. The city of Worcester just so happens to be smack, bang in the middle of  Worcestershire. So that’s it, mystery solved and in only 400 words, boy do we wish all of our article were this simple. But wait, there’s more.

Back when Worcestershire sauce was first created in roughly 1837 (the exact date isn’t know) by chemists John Wheeley Lea and William Perrins (Mr Lea and Mr Perrins), it was marketed as something quite exotic. The sauce was supposedly created from a recipe handed down by a member of the English nobility known only as Lord Marcus Sandys, who apparently learned the recipe while serving as the governor of Bengal.

It probably comes as no surprise that no one by that name ever served as the governor of Bengal. On top of this, somewhat fantastical claim, Lea and Perrins claimed that their sauce also served as an aid to digestion (as rancid fish is wont to do) and that it was effectively a great medicine. As you’ve probably guessed already, this is all hogwash- which, to be fair, was probably one of the original ingredients when they were experimenting with versions of the recipe for the sauce.

Another fishy claim made by the pair was that they first made the sauce at the bequest of someone rich and powerful, because hey, why not? Unfortunately, they claimed the first batch was awful.  It was apparently much too strong. So much so that instead of throwing it away like a normal person, they left the barrel with the sauce in their basement.

When they came back many months, or a couple years, later (depending on the version of their story you read) and saw the mixture of fish paste they’d forgotten to throw away, they decided to stick their finger right into it to see if it tasted any better than it had originally.

For some reason, rather than dying of stomach cramps on the spot, they were fine and the mixture actually tasted awesome; and thus, the sauce we know and love was born.

This is probably the one aspect of the intricate original tale weaved by the pair that I’m almost, but not quite, inclined to believe, since, well, that’s exactly how the sauce is made today and why else would you randomly store awful tasting fish juices for so long?

Regardless of the true origins of the sauce, Mr Lea and Mr Perrins quickly displayed their business acumen by paying to have ocean liners out of Britain take barrels of their sauce on-board in the late 1830s. When passengers tried the sauce and realised that it was totally god-like, they’d buy a bottle and take it with them. The ingenious part being that thousands of bottles of their sauce were now in cupboards across the globe, just waiting for people to try it and be hooked.

The plan worked perfectly and by 1866 the pair were able to sell their chemist shop to instead sell aged fish sauce full time due to the worldwide demand for it; truly they were living the dream. A fishy smelling dream, but the dream nonetheless.