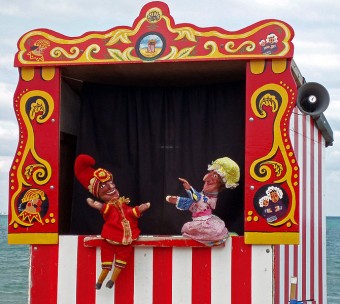 Today I found out the origin of the phrase “pleased as punch.”

As a child you might have wondered how a bowl of punch could be pleased about anything. Turns out, the saying has nothing to do with the drink. Rather, “punch” refers to the character in Punch and Judy, a puppet show that has its roots in Italy’s 16th-century commedia dell’arte.

By the 17th century, the show had spread to England. The first known record of the English Punch and Judy appears in the journal of Samuel Pepys, who saw the show on May 9, 1662 in Covent Garden, London. He wrote,

Thence to see an Italian puppet play that is within the rayles there, which is very pretty, the best that ever I saw, and great resort of gallants.

The show continued to gain popularity and, by Victorian times, was being played in all of the major cities in England. Today, Punch and Judy is still performed, though it is much more popular in the UK and Europe than it is across the pond.

If you’re unfamiliar with the show, you might be wondering what it’s all about. It’s a sort of “variety” puppet show that acts as a living history—the show is always kept topical, which is a major reason why it has remained so popular over the years. No two shows are exactly alike. Instead, they stay true to the issues of the time, often mocking current political leaders. For instance, Hitler was once featured in the show, and more recently, former British Prime Minister Tony Blair made an appearance.

But the main man of the show is, of course, Punch. Usually portrayed as a “hook-nosed, hump-backed buffoon,” Punch is considered a somewhat politically incorrect character to put it lightly. He has been depicted beating his wife, murdering people, and performing other unlawful, mischievous acts. Yes—a sadistic, evil, serial killer puppet gave us the saying “pleased as Punch.”

So, how exactly is he “pleased” again?  Punch is always gleeful about the mayhem he produces, and appears to be self-satisfied by committing heinous crimes.

The first time the exact phrase, “pleased as Punch”, was recorded was sometime in 1797.  The phrase showed up in The Baviad, and Maeviad,  satires by William Gifford:

Oh! how my fingers itch to pull thy nose! As pleased as Punch, I’d hold it in my gripe.

That said, it used to be that “proud as punch” was another phrase used as commonly as “pleased.” You can find an instance of this in Charles Dickens’ works. For instance, in the 1850 publication of David Copperfield, he wrote:

I am as proud as Punch to think that I once had the honour of being connected with your family.

Four years later, in Hard Times, Dickens wrote: “When Sissy got into the school here… her father was as pleased as Punch.”

Today, “pleased as punch” is the much more common phrase, while “proud as punch” has faded into the background. It’s funny to think that we owe it all to a wife-beating, serial killer puppet—but the phrase certainly makes more sense when you know it isn’t attributed to the stuff in your punch bowl.