Myth: Injecting medicine straight into your heart can be beneficial in some way. 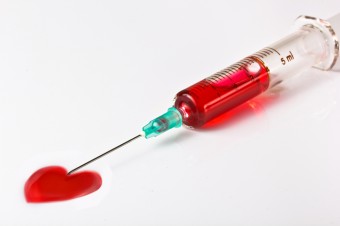 Ah, the dramatic scene that ends with an actor stabbing a needle straight into their heart, narrowly escaping death and magically curing whatever ailment just befell them. While very dramatic, it’s also very untrue and an exceptionally bad idea if your goal is to get better.

In the end, it doesn’t matter whether or not the medication attempting to be delivered would actually work in the described situations; this myth comes down to one thing: if you stick a needle in your heart, you will bleed to death from the small hole you just placed there. Just like a balloon, if you put a hole in it, it’s really hard to keep the air from escaping. The other problem with this method of delivery is your lungs. The chances of you putting a hole in one of them, as well as your heart, is pretty good. Not only would you be bleeding to death, you would be really short of breath while you slowly died.

The truth is that there are much easier ways to get medication to your heart. Medication requiring a needle has two options that are much better than a hole in your heart. The preferred method is starting an IV and giving it to the person through their veins. Considering most people have their entire blood volume pumped throughout their body in about a minute (depending on a person’s heart rate and left ventricular ejection fraction), medication delivered this way would reach the heart rather quickly. If you can’t get the medication in a vein, numerous types can simply be placed in any muscle group and have it reach your heart in under 5 minutes.

Currently, there is no treatment in modern medicine that requires a doctor to stick a needle into your heart. The closest is called a pericardiocentesis. This procedure involves a doctor sticking a needle into the sac surrounding the heart (pericardium), in an effort to remove excess fluid that’s putting pressure on the heart (cardiac tamponade). They even take great care not to advance the needle too far, causing it to rupture the heart itself. As they know, a hole in your heart is a bad thing.

While the method of medication delivery in this myth is easily debunked, it does make one wonder what else about this treatment presented in movies is also false (or true). Never to be one that leaves a person wondering, let’s break apart arguably the two most famous Hollywood scenes that used this treatment and see if we can’t reveal some other interesting facts while doing so.

Scene #1- Pulp Fiction: In which John Travolta needs to give an injection of “adrenaline” straight into the heart of Uma Thurman’s character, presumably altering the effects of the heroin she just snorted, thinking it was cocaine. After stabbing her heart, she immediately wakes up and is completely fine.

When a medical professional gives a person an “adrenaline” shot, the medication in question is called Epinephrine. Epinephrine has many uses in medicine, including cardiac arrest, allergic reactions, asthma attacks, and helping with acute low blood pressures, to name a few. It’s a hormone and a neurotransmitter that acts on several different types of nerve cells. The response involves the stimulation of your “fight or flight” nervous system (sympathetic nervous system). While beneficial in many aspects, it’s usually never given in a heroin overdose. Unless of course the person’s heart has stopped, then maybe. Even in that situation, you would also need to preform CPR and defibrillation (shocking) to be helpful.

Heroin is in a drug class called an opioid. Other opioids include codeine, morphine, oxycodone, methadone, and fentanyl to name a few. (Aside:  Heroin was originally marketed as a non-addictive cough medicine by Bayer.  Another common early use of Heroin was to help treat people who were addicted to morphine, even though Heroin ultimately proved to be more addictive.  Funny enough, when morphine was first isolated from opium in 1805, one of its early uses was as a “non-addictive” drug to treat people who were addicted to opium…)

In any event, one of the biggest problems with these types of medications, and usually the cause of the person’s death in an overdose, is respiratory depression or failure. When the person takes too much, the person can begin to breathe slower and shallower, or stop breathing all together. The heart will soon stop once this happens. Giving a person epinephrine in this situation wouldn’t help. While theoretically you might get some respiratory increase, although I can’t find any study that shows this, epinephrine would wear off long before the heroin, leaving the person still dead.

There is, however, a medication that can have the same effect as adrenaline did in the movie. It’s called Naloxone. Developed in the 1960s, it’s known as an opiate antagonist. It’s the drug of choice for treating any opiate overdose. When given, it will bind to the receptor site’s opiate drugs do, in effect, knocking them off the cells and not allowing the drug to work its magic. The effect is rather quick and nearly absolute. It can take a person from not breathing and unconscious, to completely awake and “sober” in about a minute. There can, however, be some complications from using it.

The drug itself doesn’t last as long as an opiate does, so there is a chance the person could stop breathing again. Due to the fact that the result is so absolute, if the person is an addict, completely taking away all of the effects of the opiate could cause them to immediately go into withdrawals. The results of those can be things like nausea, vomiting, muscle cramps, diarrhea and seizures. From personal experience treating these types of overdoses, I would say the two most common problems are the person’s violence just after they realize you took their “high” away, followed almost immediately by them throwing up all over you. Don’t do drugs kids!

In the end, this movie had Uma Thurman’s reaction to an antidote correct. They simply chose the wrong medication and a completely wrong delivery method.

Scene #2- The Rock:  In which Nicholas Cage has to inject Atropine straight into his heart to counter the effects of VX poison gas.

In this scene, the movie makers got most of it right. There is such a thing as VX poison gas and part of the treatment for an exposure is Atropine.

VX is classified as a lethal nerve agent. Like most nerve agents, VX works by inhibiting an enzyme called Cholinesterase. The result is a build up of a neurotransmitter called Acetylcholine within the body. This build up causes an over-stimulation of glands and muscles. The results are things like dilation of your blood vessels, slower heart rates and constriction of the bronchioles in your lungs. All of this happens while simultaneously you’re subjected to what is known as SLUDGE- “SLUDGE” being an acronym for excessive Salivation, Urination, Defecation, Gastric irritation and Emesis caused by exposure to the toxin.

If you become exposed, the toxin causes you to stop breathing due to the over-stimulation of your diaphragm (and many other muscles)- all of this while leaking fluids from most every orifice of your body.

The treatment for this does include atropine. It also includes a drug called Pralidoxime. Pralidoxime helps by reversing the effect on Cholinesterase thereby helping to reduce the amount of Acetylcholine in the body. Atropine helps by competing with Acetylcholine at its receptor sites, reducing its affect.

The recommended treatment for exposure to this type of toxin includes the use of both. The military, and some civilian emergency services, use what is called a “Mark 1 kit” that has both medications in an auto-injector. No, it doesn’t inject anything in to the heart for the aforementioned reasons. The recommended sites are on the thighs and hips.

While this movie did get some of the treatment right, it got the delivery method completely wrong, but a gigantic needle to the heart is certainly slightly more dramatic I suppose.  Just don’t try that at home kids. 😉