The Peasant Who Became a Powerful Emperor: Basil I 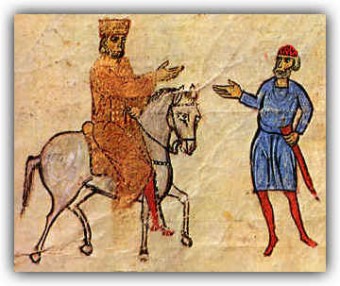 Born into a poor peasant family in a foreign land, no one had worse odds to become the ruler of the Byzantine Empire than Basil. Yet, through a combination of hard work, scheming, murder and competence, Basil ascended to the Byzantine throne and enjoyed 19 years of relatively peaceful rule.

Authorities disagree over when and where Basil was born. Some place his birth year as 812 CE, while others set it around 830 CE. Ethnically Armenian, scholars also disagree over whether he was born in Thrace, and then carried off with his peasant parents as captives of the Bulgarian khan Krum, or if he was born in Macedonia after his parents were abducted. Whatever the case, he lived for a time in Macedonia, although Armenian was his first language, and he is reported to have spoken Greek (the language of Macedonia) with a noticeable accent.

At some point, Basil, along with other captives, escaped the Bulgarians and returned to their homes in Thrace around 836. Finding little opportunity there, he set off to make his fortune in the big city. His arrival in Constantinople has been transformed by admiring historians into legend:

On a Sunday, near the hour of sunset, he reached the Golden Gate, a poor unknown adventurer, with staff and scrip, and he lay down to sleep in the vestibule of the adjacent church of St. Diomede. During the night, Nicolas, who was in charge of the church, was awakened by a mysterious voice saying, “Arise and bring Basileus into the sanctuary.” He got up and looking out saw nothing but a poor man asleep. He lay down again, and the same thing was repeated. The third time, he was poked in the side by a sword and the voice said, “Go out and bring in the man you see lying outside the gate.” He obeyed, and on the morrow he took Basil . . . and adopted him as a brother.[1]

Climbing through the Ranks

Regardless of the veracity of any supernatural claims for Basil’s ascension, he was greatly helped by the monk, Nicolas, who introduced him to the doctor of a very rich and well connected man, Theophilitzes.

Possessing extraordinary strength, Basil was employed by the courtier (and relative of the Empress Theodora) as a groom. Together, they travelled to Patrae on the Greek peninsula of Peloponnese. There, Basil met (and impressed) the wealthy Danelis. Shortly thereafter, Basil fell ill (or faked being sick) and was left behind by Theophilitzes. When Basil recovered, Danelis became his patron and made him a wealthy many by bestowing on him slaves, gold and other items, ostensibly in exchange for Basil taking her son under his wing.

Nonetheless, Basil remained in Theophilitzes’ service and eventually reunited with him in Constantinople. While attending a wrestling match (Basil was not originally one of the contestants), and because of his enormous strength, he was invited to take on that day’s champion; according to one account: “Basil threw the Bulgarian, squeezing him like a wisp of hay. ‘From that day the fame of Basil began to spread through the city.'”[2]

The triumph was eventually reported to the emperor Michael III. Later, after Basil helped tame the emperor’s intractable new horse that had resisted all other efforts, Michael took Basil into his own service as Hetaeriarch (captain of the guard).

Shortly thereafter, Basil was appointed to the post of High Chamberlain. Totally obedient to Michael (or seemingly), Basil divorced his wife at Michael’s command and married Michael’s mistress (in name only). Many scholars believe that the children of this marriage were actually Michael’s (including Basil’s successor, Leo VI).

It is unclear if loyalty to Michael or personal ambition was the driving force behind Basil’s next move. Basil had heard a rumor (or started one, depending on your point of view) that the emperor’s right hand man, the then second most-powerful man in the Byzantine Empire, Caesar Bardas, was planning to depose Michael. Basil tried to warn the emperor, but Michael did not believe him. So Basil conspired with other ambitious young men, including Symbatios, a young minister and son-in-law to Caesar Bardas. Together they were able to convince Michael of Bardas’ treachery, and Bardas was eventually murdered when Basil “and the other co-conspirators rushed in and hewed him in pieces” right in front of Michael.[3]

Grateful to be rid of the traitor, Michael, who was officially childless, adopted Basil as his son and promoted him to the rank of Magister. Then, mysteriously, on the Pentecost, May 26, 867 CE, Michael crowned Basil Basileus and Augustus. On the steps before the ambo in St. Sophia, Michael addressed his subjects:

The Caesar Bardas plotted against me to slay me, and for this reason induced me to leave the city. If I had not been informed of the plot by Symbatios and Basil, I should not have been alive now. The Caesar died through his own guilt. It is my will that Basil, the High Chamberlain, since he is faithful to me and protects my sovranty {sic} and delivered me from my enemy and has much affection for me, should be the guardian and manager of my Empire and should be proclaimed by all as Emperor.[4]

Although Michael’s words were strong, the real effect was that Basil was in charge of the day-to-day operations of the empire, while Michael retained his position as the true emperor. Hard to believe that didn’t end well.

Sure enough, the two had a falling out. Michael began to think Basil was too big for his britches, and he considered appointing another to Basil’s place. One drunken evening, Michael told Basil, “I made you Emperor, and have I not the power to create another Emperor if I will?”[5]

Having a talent for murder by this point, Basil hatched a plot to kill Michael. On September 24, 867 CE, Basil enticed Michael to dinner; while Michael drank heavily, Basil made an excuse to leave briefly. He snuck into Michael’s chambers and jerry-rigged the lock. Returning later with eight buddies, Basil and his co-conspirators hacked at Michael, cutting off both of his hands before killing him. Basil’s position as emperor was now secure.

During his 19 years as emperor, Basil kept the ship of state on an even keel. He oversaw the creation of a set of laws, known as the Basilika, which governed Byzantium until the fall of Constantinople in 1453. He also extended Byzantium’s power by forming alliances with European rulers and establishing strongholds across the Adriatic and Mediterranean Seas.

His greatest gift may have been his understanding of human motivations. He successfully navigated difficult court politics and was able to keep its different factions from ever uniting against him. He also worked at maintaining a good image with the common man by living piously, providing orderly public services and maintaining relatively light taxes.