The Movie That Killed Elvis Presley 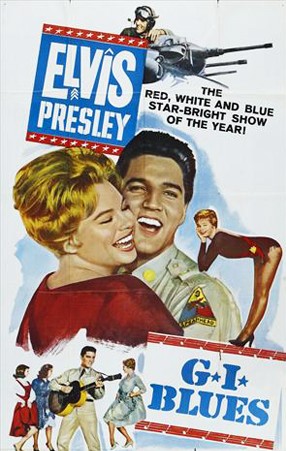 It was March of 1960.  The teenagers of the world were rejoicing.  Why?  Because Elvis was getting out of the army.

Yes, Elvis “The Pelvis” Presley, Rock ‘n’ Roll’s greatest rebel iconoclast, was finally leaving the U.S. Military and taking up his career as the sneering, hip-swiveling Rock ‘n’ Roller.  Elvis’ film career was foremost in the minds of his fans, right along with his music.

Before leaving to serve his stint in Germany, Elvis had made four films, each one fairly good, each one demonstrating a definite talent, a screen charisma, and a very real potential for Elvis’ real dream as a performer- to become a respected actor, like his supreme idol, James Dean.

After two years of serving his time for Uncle Sam, for his “comeback” movie, Elvis and his manager, Colonel Tom Parker, chose a lightweight musical-comedy called “G.I. Blues”.  “Marlon Brando did a musical early in his career”, Elvis happily chirped at his back-from-the-army press conference.

Elvis, seemingly a nice guy, also had another reason for his film choice, saying “It was one way I had to show all the guys with whom I served in the army how much I respected them.”

A noble sentiment, however, “G.I. Blues” was to be the blueprint for Elvis’ future movie career (i.e. a lightweight frilly, frothy musical with a pretty leading lady, in this case dancer Juliet Prowse).

The screenplay was fine- if it had been written for Bing Crosby in 1936 or Fred Astaire in 1948 or even Frank Sinatra in 1954.  But the kids, Elvis’ rock hardcore fans, were waiting to see Elvis snarl and sneer, and rebel and fight the authorities, just like he did in his four pre-army films.

The earliest clue to the movie’s ultimate fate was Elvis himself, and his appearance.  Elvis’ world-famous sideburns were gone, shaved off in the military.  And he still danced, but he didn’t shake those legendary hips like he did before the army got him.  Yes, he seemed to sing, but not like Elvis, now more like Frank Sinatra or Dean Martin.

The songs were okay, but they somehow had lost their bite.  Elvis was now all groomed, for “the whole family”, a clean, wholesome family entertainer.

In “G.I. Blues”, instead of singing “Heartbreak Hotel”, “Jailhouse Rock” or “Hound Dog”, Elvis sings “Wooden Heart”, “Frankfort Special” and “Tonight is so Right for Love”.  He even sings one of the songs holding a little puppet in his hand, singing to a set of twins he is baby-sitting.

I mean, heck, there’s nothing inherently wrong with singing to set of twins you’re baby-sitting while you’re holding a cute little puppet; it’s actually kind of endearing, but this guy is Elvis Presley and this was not the persona he was so well known and loved by many for.

Elvis attended a screening of “G.I. Blues” on September 12, 1960, with co-star Juliet Prowse; the film officially premiered on November 23, 1960. Now comes the killer; the start of the domino-effect that killed Elvis Presley and any hopes he ever had to become a “serious actor” a la Dean and Brando.

G.I. Blues, despite decidedly mixed reviews, was a box-office bonanza.

It rocketed to the #2 spot at the box office and ended 1960 as the 14th biggest box-office draw of the year, earning a robust $3.4 million dollars (about $26 million today).

OK. That’s fine, so “G.I. Blues” was a smash, now Elvis wanted to get back to some “serious business”, starring in some really meaty roles to get back his acting chops.

Then the nail in the coffin. He came back with another colorful, glitzy musical/comedy called “Blue Hawaii”. This proved to be a huge smash, the biggest money-maker of Elvis’ career up to that point.

The die was cast. The pattern was set, and now the studio execs all felt that Elvis making lightweight musicals would mean big financial returns, and casting him in serious dramas, like he wanted, potentially meant box office flops.

Elvis was to spend the majority of the remainder of his once-so-promising movie career singing to cuties in bikinis, warbling half-baked numbers, getting in fights and, at film’s conclusion, getting the girl.  And the scripts (with the rare exception of 1963’s quite enjoyable “Viva Las Vegas”) were to get progressively worse and worse.

This brings up the question, “Why didn’t Elvis, one of the biggest stars in show business, exert his own authority?”-  “OK, I’ll make a crummy musical, you guys can make your loot, but let me star in a decent vehicle, huh?”  Turns out, he briefly flirted with that, but after the flops that were “Flaming Star” and “Wild in the Country”, he shut up and just took the roles offered.  Being in crappy movies is better than being in no movies… right? Right?

Elvis remained quiet, swallowing what must have been a very hurtful dose of lost pride and dignity. The once-promising young rebel was to become a cornball caricature. His film career was to be by all reports, by far, the biggest disappointment of his career.

In the end, most of the 27 movies Elvis made in the 1960s resulted in him becoming viewed as “a joke by serious music lovers and a has-been to all but his most loyal fans”, according to historian Connie Kirchberg.

From there he slowly fell further- having an affair, getting a divorce, taking more and more prescriptions drugs as his health, and physique, rapidly declined.  Near the end, he could barely keep upright on the stage, holding the microphone stand for support, while he slurred his way through the lyrics.   As guitarist John Wilkinson stated:

He was all gut. He was slurring. He was so fucked up. … It was obvious he was drugged. It was obvious there was something terribly wrong with his body. It was so bad the words to the songs were barely intelligible. … I remember crying. He could barely get through the introductions…

In 1973, he overdosed on barbiturates twice, in one of the instances ending up in a coma for three days.

Then a book was published by three of his bodyguards that had been unceremoniously fired, in which they revealed to the public that Elvis, who had once criticized the Beatles for their drug use- the now cookie cutter clean Elvis- himself was taking numerous drugs daily.  15 days later, on August 16, 1977, Elvis was found on the floor of his bathroom and was pronounced dead at 3:30 pm after being taken to Baptist Memorial Hospital.

John Lennon was asked for a quote when Elvis Presley passed away in August of 1977.  “Elvis died in the army” was Lennon’s terse reply.