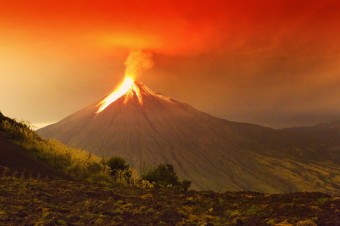 This Day In History, 1883: Krakatau Erupts

On a small, desolate island called Krakatau west of Sumatra in Indonesia, the most violent volcanic eruption in recorded history occurred, estimated to have produced an equivalent of a 200 megaton explosion, which is about 4 times that of the largest nuclear bomb ever detonated, the Tsar Bomba.  It is also about thirteen thousand times the yield of the bomb dropped on Hiroshima.  The eruption could be heard up to 3,000 miles away, and its explosive force threw ash an estimated 50 miles into the sky. The volcano created devastating and deadly tsunamis in its wake, and in the end 36,000 people lost their lives.

The initial indications that Krakatau was awakening for the first time in two centuries was an observation by a German war ship of a dust and ash cloud over the long dormant volcano. Over the next couple of months, small explosions were noted by other boats and inhabitants of Sumatra and Java. Obviously having no idea that they should be running like hell, the locals greeted each new mini-explosion with mounting excitement and a sense of celebration.

On August 26 the party was over when Krakatau blew apart with unimaginable violent fury, setting off a domino effect of natural disasters that would impact the globe well into the future. One enormous blast decimated a full two-thirds of the island’s land mass, and as the mountain plunged into the water it released a series of pyroclastic flows, which are rapidly moving streams of ash, rock and molten gas. It also generated deadly tsunamis that swallowed nearby coastlines, claiming thousands of lives.

Things went from bad to cataclysmic on the early morning of August 27 when four more eruptions rocked what was left of the tiny island. The force of the explosions was so strong that dust particles from Krakatau drifted around the globe, causing eerily beautiful sunsets and lowering the temperature worldwide by several degrees.

The majority of the 36,000 lives lost due to the volcanic eruption – roughly 31,000 – can be attributed to the awesome power of the tsunamis that resulted from most of the island crumbling into the water from the volcano’s fury. The largest of these waves was estimated at a staggering 120 feet in height. When the massive walls of water met the land, they quickly stripped the islands of all vegetation and whisked it all out to sea, leaving the island bare and exposed. Many human beings in the path of the water were also swept away and drowned, and those spared a watery grave were burned to death in the path of a pyroclastic flow.

Krakatau, though seemingly sleeping, is still an active volcano. It’s not the only one – Indonesia has 130 active volcanoes, which is more than any other country on the planet.