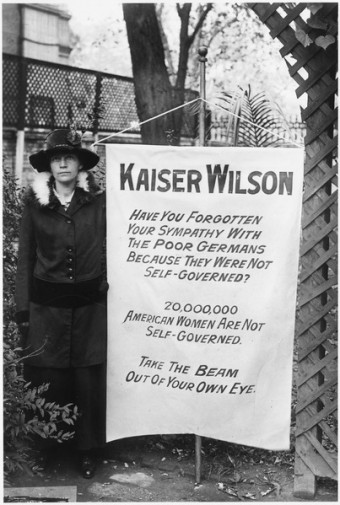 The 19th amendment to the United States Constitution, which was the result of about 70 years of hard work and lobbying from tireless suffragists who battled on both the state and national fronts, prohibits any US citizen from being denied the right to vote on the basis of their sex. The two portions of the amendment simply state:

“Congress shall have power to enforce this article by appropriate legislation.”

The long road to these two simple phrases being added to the Constitution began in earnest in the mid-19th century. The first women’s rights convention in the U.S. was organized by Elizabeth Cady Stanton and Lucretia Mott. About 300 people attended the meeting in Seneca Falls, New York in July of 1848, including famed abolitionists and former slave Frederick Douglas.

While nearly every measure proposed there passed with little controversy, the issue of women voting was met with considerable contention.  Lucretia Mott herself was staunchly against the idea and was one of the chief speakers against putting that issue on their Declaration of Sentiments, stating about that proposition,   “Why Lizzie, thee will make us ridiculous.”

The issue was heatedly debated, and a key speaker ended up being not only one of the few men at the meeting, but the only black man present, Frederick Douglas, who spoke, as was his normal fashion, extremely eloquently in support of women’s right to vote.  He stated, among other things, that if women could not vote, he could not in good conscience himself accept the right to vote.  And that

(Editor’s aside: if you haven’t read Frederick Douglass’ works Narrative on the Life of Frederick Douglass, an American Slave, My Bondage and My Freedom, and Life and Times of Frederick Douglass, I HIGHLY recommend them. You can find the e-book versions free with a little Googling as the copyrights have expired, or get the print version of all three here.  Another interesting read is the speech Douglas gave on women’s suffrage some four decades later, addressing the International Council of Women in April of 1888.  You can find the full transcript of that speech here.)

In the end, at that first meeting, 68 women and 32 of the 40 men who attended signed the Declaration of Sentiments, which included:

…But when a long train of abuses and usurpations, pursuing invariably the same object, evinces a design to reduce them under absolute despotism, it is their duty to throw off such government, and to provide new guards for their future security.

Such has been the patient sufferance of the women under this government, and such is now the necessity which constrains them to demand the equal station to which they are entitled. The history of mankind is a history of repeated injuries and usurpations on the part of man toward woman, having in direct object the establishment of an absolute tyranny over her.

To prove this, let facts be submitted to a candid world.

For asserting their right to vote, “The Seneca Falls Convention”, as it came to be known, endured considerable public derision, as Mott had predicted, and some of the earlier supporters of the group turned their backs on them over the issue.

The first annual national women’s rights convention occurred in 1850, and became a rallying point for the burgeoning cause of women’s suffrage. Susan B. Anthony and Elizabeth Cady Stanton co-founded the National Woman Suffrage Association, which was working toward a woman suffrage amendment to the Constitution.

Another organization started by Lucy Stone that same year called the American Woman Suffrage Association was begun with the purpose of gaining ground for the cause through the state legislatures. These two organizations merged as one in 1890, calling itself the National American Woman Suffrage Association. In 1890, a huge milestone for women’s rights was reached, with the State of Wyoming being the first to grant women the right to vote.

Women’s roles were changing as the 20th century dawned. More women had access to education and were starting to work outside the home. They also adopted a more aggressive approach to women’s suffrage, choosing civil disobedience over lobbying as WWI came and went.

The woman suffrage amendment finally passed the House of Representatives in January 1918. It was approved by the Senate in June of the following year and sent to the states to be ratified. Suffragists campaigned hard to ensure ratification was indeed the outcome, and their hard work paid off because on August 20, 1920, Tennessee became the 36th state to ratify the 19th amendment, providing it the required majority to make it law.

At 8 a.m. on the morning of August 26, 1920, Secretary of State Bainbridge Colby signed the document with no fanfare; no cameras to capture the moment; no filming to preserve this piece of history. Not a single one of the tireless woman suffrage leaders was present who worked so diligently to make this moment a reality, though that afternoon the leader of the National American Suffrage Association, Carrie Chapman Catt, was a guest of President Woodrow Wilson and Edith Wilson at the White House.