This Day in History: August 28th 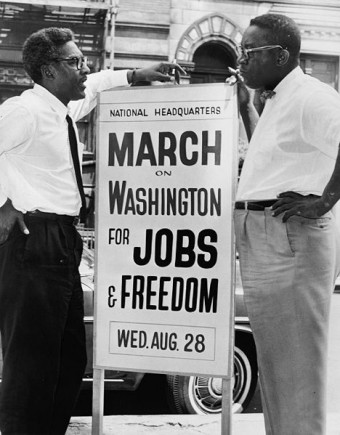 This Day In History, 1963: The March on Washington for Jobs and Freedom

1963 was a year marked by racial tension and increasing civil rights demonstrations throughout the United States. The nation was outraged by television images of police officers in Birmingham, Alabama using attack dogs and fire hoses against protestors, many who were teenagers or even younger. Martin Luther King, Jr. was jailed during these protests and used the time to write his “Letter From Birmingham City Jail,” which encouraged acts of peaceful civil disobedience in protest of unfair laws. The numerous protests and demonstrations staged throughout the nation culminated in the March on Washington in August.

The demands of the march were the end of segregation in public schools and police brutality, civil rights legislation, a jobs program, a law prohibiting racial discrimination in hiring practices, a minimum wage of $2/hour (about $15 today), and a self-governing District of Columbia.

An estimated 250,000 people, a quarter of them white, gathered in Washington, D.C. to march together from the Washington Monument to the Lincoln Memorial on a day that turned out to be part demonstration, part celebration. The crowd was civil and peaceful, making the overwhelming police presence completely unnecessary. It was the first demonstration to have extensive international television and media coverage, and also the largest gathering of its kind in the capital.

There were musical performances by such artists as Mahalia Jackson, Bob Dylan, Marian Anderson and Joan Baez, and appearances by other stars both black and white. The iconic moment of the day was when Dr. Martin Luther King, Jr. stood in front of the statue of Abraham Lincoln and spoke to the rapt crowd of a quarter million people.

I say to you today, my friends, that in spite of the difficulties and frustrations of the moment, I still have a dream. It is a dream deeply rooted in the American dream.

I have a dream that one day this nation will rise up and live out the true meaning of its creed: “We hold these truths to be self-evident: that all men are created equal.”

I have a dream that one day even the state of Mississippi, a desert state, sweltering with the heat of injustice and oppression, will be transformed into an oasis of freedom and justice.

I have a dream that my four children will one day live in a nation where they will not be judged by the color of their skin but by the content of their character.

I have a dream today.

King had used the “I Have a Dream” concept when speaking publicly before, but never with such passion or effectiveness. He concluded his speech with his vision of a racially harmonious nation: