Myth: Nero played music while Rome burned to the ground. 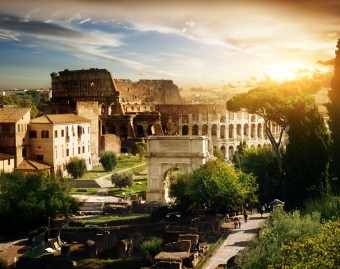 The infamous phrase—“Nero fiddled while Rome burned”—has come to mean a person who is neglecting their duties, probably by doing something frivolous. Nero is painted as an emperor who didn’t care about his people, but it’s likely that he didn’t deserve such a bad reputation.  This is extremely similar to the tale of Marie Antoinette- supposedly saying “Let them eat cake!” when hearing of the starving masses. (Note: She never said this and popular history’s representation of Antoinette has been heavily influenced by the 18th century French who despised her mostly because she was Austrian and a prominent member of the aristocracy, rather than because of anything she actually did per se.  Read more on the sad life of Marie Antoinette here.)

Back to Nero, the story goes that a great fire swept through Rome in 64 AD, and Nero played his fiddle in a villa some miles away, ignoring his duty to the great city. In truth, there was such a fire, though its extent is unknown.  According to Tacitus, the fire lasted for six days and decimated Rome, with only four districts untouched (out of a total of fourteen).  He goes on to state that ten of the eleven districts that burned were heavily damaged, with three of those completely destroyed.  However, oddly, there is very little documented mention of the fire from those who actually lived through it.  The only Roman historian during that period who even mentioned it at all was Pliny the Elder, and even he only briefly referenced it in passing.

Had it been as widespread as Tacitus claimed, one would think the likes of Plutarch, Epictetus, or other such famed Roman historians who lived through the fire would have mentioned it.  And, indeed, we see that perhaps it wasn’t that great of a fire from the only other documented first hand account of the scope of the disaster- a letter from Seneca the Younger to Paul the Apostle, where he explicitly stated that only four blocks of insulae were burned (a type of apartment building), along with 132 private houses damaged (about 7% of the private houses in the city and .009% of the insulae).  Not anywhere close to as widespread as Tacitus later claimed, though Seneca did say the fire lasted six days, as Tacitus stated.

As to Nero’s reaction to the fire, the first and biggest flaw in the fiddling story is that the fiddle, or violin, didn’t actually exist in Nero’s time. Historians aren’t able to give an exact date for the invention of the violin, but the viol class of instruments to which the violin belongs wasn’t developed until at least the 11th century. Many agree that the violin itself wasn’t being played until around the 16th century. If Nero actually did play a stringed instrument—and there’s no evidence that he did, whether during the burning of Rome or otherwise—it was probably a lyre or cithara.

Okay, so some details can get muddled through history. Did Nero neglect Rome while it burned? Historians argue probably not. Reports do place Nero thirty-five miles away from Rome at the time of the fire, as he was staying in his villa at Antium. However, an account from Tacitus tells us that he returned to Rome immediately when word of the fire reached him in order to begin relief efforts. As the fire raged on, Nero even opened up his own gardens to provide a temporary home for those who were now homeless.  He also ordered the construction of emergency accommodation and cut the price of corn, as well as provided food directly, so that people could eat.  Besides this, he paid for much of these relief efforts out of his own pocket.

However, Tacitus also tells of the rumour that had spread among the masses: while the flames surged through the city, Nero stood on his private stage and sang about the destruction of Troy in a comparison of the two events. Whether or not the rumour had any evidence to back it up or was just something made up by the unhappy masses, we don’t know, but this and Suetonius’ account are the most likely source of the fiddle story we hear today. Unfortunately for Nero, at least in the context of this story, he did have a reputation for enjoying concerts and participating in music competitions, so the activity itself wasn’t entirely unlikely even if the timing of the act is highly questionable.

While Tacitus claims the singing story was a rumour, Suetonius wrote about it with conviction. However, the story could have been an attempt to further mar Nero’s name. Nero faced problems during his reign from the very start, when it was reported that his own mother poisoned his predecessor, Claudius. He was also blamed for the death of Claudius’ son Brittanicus, who was being urged to take his proper place as Emperor by overthrowing Nero. Numerous other deaths were thought to have been committed by Nero’s hand, including one of his wives and his own mother.

As such, Nero was painted as a man who was difficult for the masses to trust. No one knew how the fire started, and many Romans believed that he had started the fire that burned their city. (It likely started in shops containing flammable goods, and was probably an accident rather than any one person’s intentional act.)

With the mob out for blood, Nero was forced to turn to a scapegoat and blamed Christians for starting the fire. There were only a small number of Christians in Rome at the time and they were considered a strange religious sect, so they were an easy target. As Tacitus stated:

Consequently, to get rid of the report, Nero fastened the guilt and inflicted the most exquisite tortures on a class hated for their abominations, called Christians by the populace. Christus, from whom the name had its origin, suffered the extreme penalty during the reign of Tiberius at the hands of one of our procurators, Pontius Pilatus, and a most mischievous superstition, thus checked for the moment, again broke out not only in Judæa, the first source of the evil, but even in Rome, where all things hideous and shameful from every part of the world find their centre and become popular. Accordingly, an arrest was first made of all [Christians] who pleaded guilty [to the fire]; then, upon their information, an immense multitude was convicted, not so much of the crime of firing the city, as of hatred against mankind. Mockery of every sort was added to their deaths. Covered with the skins of beasts, they were torn by dogs and perished, or were nailed to crosses, or were doomed to the flames and burnt, to serve as a nightly illumination, when daylight had expired.

Even finding someone to blame for the fire didn’t help Nero’s plea of innocence. In the wake of the fire, he built a palace on top of some of the land cleared by the flames, which people argued he had been planning from the start, though this is highly unlikely as the place he built the new palace was over a half mile away from where the fire started. In addition to a new palace, Nero did provide for the reconstruction of the city, but rebuilding stretched the limits of Rome’s treasury at the time. He was forced to devalue Roman currency, which wasn’t a popular move.

Nero ended up committing suicide—or at least, begging his secretary to kill him when he lost the nerve to do it himself—four years after the fire. Accounts of his life and of the time of the fire are highly contradictory. Further, Suetonius and Tacitus wrote their histories fifty years after Nero died, and Cassius Dio wrote his 150 years later. Many historians also think it likely that Nero was more popular with the people of Rome than he was with the senators, and as all three of the main sources were from the senatorial class, it’s likely they carry more than a little bias against him, not unlike happened with the popular history of Marie Antoinette. That being said, Tacitus did state that while Nero’s death was welcomed by senators, the lower classes mourned his passing.

So in the end, the implication that “Nero fiddled while Rome burned”—or played the lyre, sang a song, or neglected his duty in any way—is likely the result of anti-Nero propaganda and an attempt to tarnish his name. The morality of many of his actions during his reign is open to debate, but the fiddling, or playing music, story is almost certainly a myth.