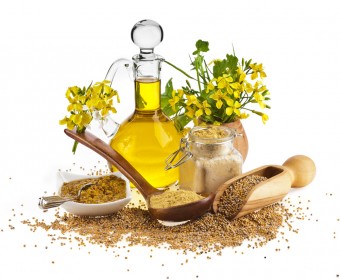 Today I found out why mustard is yellow.

A common misconception is that yellow mustard (the kind you put on your hot dog) is yellow because of the mustard seed. This is not true. The mustard seed is a dullish gray, brown color. The striking, bold yellow color actually comes from the rootstock of a plant called turmeric.

Turmeric, native to the rainy humid tropical forests of South Asia, has been used as a natural food dye for centuries. The turmeric plant is harvested annually for its rhizome, or rootstock. The rhizome is boiled, dried out, and ground into a powder. This powder is then mixed with mustard seed powder, vinegar, water, salt, and voila, you got yourself traditional yellow mustard!

Turmeric is also a common ingredient in many South Asian and Indian dishes. It provides an earthy, slightly bitter taste that complements many curries. In addition, it isn’t just the rhizome powder that is used for cooking, but the whole plant. The leaves of the turmeric plant are used in many Indonesian recipes due to the plentifulness of the plant in the region and the sharp flavor of the leaves.

Throughout the generations of living off of the land in the region, people have discovered that turmeric possesses many medicinal qualities. Traditionally, it has been used an anti-inflammatory, antiseptic, and a guard against liver damage. In fact, the American Cancer Society has officially stated that curcumin, the active ingredient in turmeric, is an antioxidant and has shown in preliminary studies to kill cancer cells in lab samples. Plus, it has been found to reduce the growth of several different forms of cancer cells and tumors in lab animals. The United States Institute of Health rated turmeric as “possibly effective” for Osteoarthritis and upset stomach, with research still pending.

Turmeric began to make its way west during the 12th and 13th centuries. In medieval England, turmeric was often called “Indian saffron” since it was often used as a cheaper alternative to the much more pricey saffron. In 1280, Marco Polo wrote in his memoirs that turmeric was a vegetable “with the properties of saffron, though it is not really saffron”. In the 18th century, turmeric was beginning to be grown in Caribbean countries, where the climate was similar to South Asia. Jamaica became a big grower of turmeric and to this day, rhizome powder is still used in Jamaican cuisine.

Getting back to the mustard of it all, mustard itself dates back to the ever-enterprising Romans. They would combine the seeds with unfermented grape juice to create what they called “burning juice”, or mustum ardens in Latin (hence our now familiar English word “mustard”.) The popularity of mustard grew in Rome and swept into their conquered territories. In the Burgundy region of France, most famous for its wines, a little town called Dijon embraced mustard and began making its own variety, substituting the unfermented grape juice with vinegar. To this day, Dijon, France is still known as the mustard capital of the world for its unique and sharp tasting Dijon mustard.

Yellow mustard didn’t come along until the turn of the 20th century. In 1884, two brothers by the name of Robert and George French bought a flourmill in Rochester, New York after their previous flourmill upstate burned down. They named the mill the R.T. French Company. When Robert passed away, George’s other brother, Francis, came aboard to help the family business. In 1904, George began experimenting with “creamy salad mustard”. He added turmeric to the traditional recipe for added presentation and color. Yellow mustard premiered at the St. Louis World’s Fair in 1904 as a condiment to put on hot dogs to great fanfare. The rest, as it were, is mustard history.