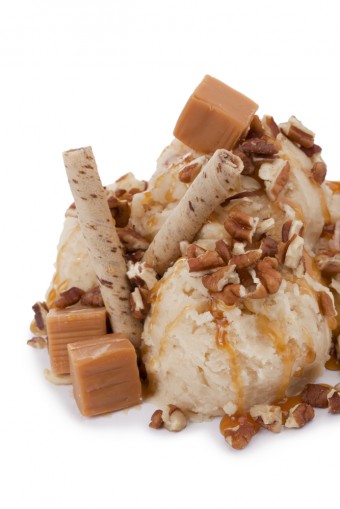 Today I found out that both Häagen-Dazs and Frusen Glädjé are American companies, something that may come as a shock to the many people who assumed – and presumably still assume in some cases – that the two brands were not as “American as apple pie”, and more likely to be of Scandinavian heritage.

But no, the Scandinavian vibe surrounding the two brands was purely a marketing gimmick, albeit a very successful one, and the two brands are home grown American brands. Whether or not that makes you want to reach for the Ben and Jerry’s in protest or simply shrug your shoulders and dig into some Häagen-Dazs depends completely on how you feel about stunt marketing I suppose.

Häagen-Dazs was the first on the scene, starting out in 1961 in the Bronx, New York, which is a few miles away from Scandinavia… but can be just as chilly during the winter months. Reuben and Rose Mattus were the two people behind the company.  The married couple’s genius idea was to create an ice cream brand that gave the people more than just the same old chocolate, vanilla, and strawberry that dominated the market at the time.

Reuben had been working in the ice cream business for years due to his Uncle owning an Italian ice-lemon business, but the big brands had priced him out of the ice cream market- that is until he realized that if he used higher priced products and made the ice cream heavier, the higher mark-up price would mean higher profits. All he needed was a name.

This is where people may laugh themselves silly or become madly confused. The name Häagen-Dazs means absolutely nothing. Nothing at all. Reuben wanted to use foreign branding to give his ice cream an edge, and he wanted something Danish sounding, supposedly as a tribute to the way that the Jews of Denmark were treated during World War II.

A small stroke of genius – and some made up words – launched a global franchise that grossed £44million (about $66 million U.S.) in December 2011 alone and sells over 13 million ice cream tubs every year. How’s that for foreign branding?

Following on from the success of Häagen-Dazs came Frusen Glädjé, which was the brainchild of ice cream maker Richard Smith, who used the Swedish terms for “frozen joy” or “frozen delight” – “Frusen Glädjé” – and turned it into a U.S.-by-way-of-Scandinavia brand of ice cream, and a rival for Häagen-Dazs.

Suffice to say, it didn’t go down too well with the big daddy already on the scene. Häagen-Dazs and Frusen Glädjé had a legal wrangle over the use of the Scandinavian marketing theme (seriously). In 1980 – the same year that Frusen Glädjé was released – Häagen-Dazs sued Frusen Glädjé for what they felt was a blatant attempt to jump on the bandwagon and steal their brand (and their customers), also stating that their new rivals displayed a list of artificial ingredients not found in the ice cream.

It was all deemed a little like the pot calling the kettle black as far as the courts were concerned, with the court ruling against Häagen-Dazs and accusing them of having “unclean hands” because they themselves had marketed themselves as Scandinavian despite having no real connection to the region.

Although Frusen Glädjé won the court battle, it was to lose the war. Now regarded as a retro product that is sometimes mentioned in popular culture (including an episode of Family Guy and in the book American Psycho), Frusen Glädjé was only on the market from 1980-85, when the founder Richard Smith sold the rights to Kraft. Since then, it has disappeared from supermarket shelves seemingly forever, mainly due to confusion in the selling process, which lead to the buyers not being aware that the brand was even in the deal, meaning it was forgotten for a time, rather than defeated on the sales market. D’oh!

Häagen-Dazs, on the other hand, has simply continued to grow over the years, and whilst its competitor is only talked about in terms of 80’s nostalgia, Häagen-Dazs can be found in home freezers, supermarkets, small shops, cinemas and theatres the world over. It makes you wonder if there are any Scandinavian ice cream brand owners that are scratching their heads as to why they weren’t able to capitalize on America’s apparent love for cold Scandinavian confectioneries.