Will a Frog Actually Allow Itself to be Boiled Alive if You Raise the Temperature Slowly? 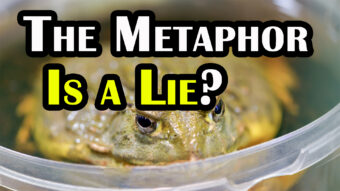 Put a frog in a pot of boiling water and it will immediately jump out. But put that same frog in a pot of cold water and raise the temperature gradually enough, and it will be boiled alive. This evocative story has long served as a useful metaphor for complacency in the face of gradual change, being used in discussions of phenomena as diverse as climate change, abusive relationships, and encroaching government surveillance. And while the original experiment that established the principle is rarely mentioned, the science behind it is commonly accepted as fact. But…is it? Has anyone actually boiled a frog alive – and if so, did the frog really not try to escape?

To begin with, the origins of the boiled-frog fable lay in the work of 19th Century German physiologist Friedrich Goltz, who in the 1870s set out to determine whether animals have a soul – and, if so, where in the body it is located. Goltz was particularly interested in fellow physiologist Eduard Pflüger’s concept of the “spinal cord soul,” a second seat of consciousness thought to exist separately from the brain. To this end, in 1872 Goltz placed frogs in cold water and slowly raised the temperature. According to contemporary British philosopher George Lewes, death occurred at around 40 degrees, while:

“…quietly the animal [sat] through all successions of temperature, never once manifesting uneasiness or pain, never once attempting to escape the impending death.”

This remarkable result was duplicated by German scientists Albert Heinzmann in 1872 and Carl Fratcher in 1875. So, case closed then? Well, not quite, for this account leaves out one critical fact: that all the frogs in question had been pithed.

Pithing is a laboratory technique which involves destroying a frog or other lab animal’s cerebrum, usually performed by inserting a needle into the back of the skull and sweeping it side-to-side. This destroys the animal’s higher brain functions while leaving the brainstem intact, meaning that while the animal is no longer conscious all its involuntary functions such as heartbeat and breathing carry on, allowing the function of these organs to be studied during dissection. Goltz pithed his frogs to determine whether the supposed “spinal cord soul” could produce the same conscious response as the brain. As it could not, he deduced that the soul resided entirely within the brain. In reality, without the brain a frog’s nervous system is only capable of simple reflex, which a gradual enough increase in temperature does not trigger. However, when Goltz tried the same experiment with an intact frog:

“Goltz observed that a frog, when placed in water the temperature of which is slowly raised towards boiling, manifests uneasiness as soon as the temperature reaches 25° C., and becomes more and more agitated as the heat increases, vainly struggling to get out, and finally at 42° C., dies in a state of rigid tetanus.”

While this would seem to indicate that the myth holds true only under extremely specific conditions, other scientists including Heinzmann, Fratscher, and Englishman William Sedgewick also observed this phenomenon in normal, unpithed frogs. In Sedgewick’s 1888 paper On the Variation of Reflex Excitability in the Frog Induced by Changes of Temperature, this apparent contradiction is explained by the fact that a frog’s thermal response is highly dependent upon the specific heating rate. According to Sedgewick, Goltz heated the water from 17.5 degrees Celsius to 56 degrees over the span of 10 minutes – a rate of around 3.8 degrees per minute – while Heinzmann raised the temperature from 21 to 31.7 degrees over 90 minutes – a rate of only 0.2 degrees per minute. Thus, according to Sedgewick:

“The truth appears to be that if the heating is sufficiently gradual, no reflex movements will be produced even in the normal frog; if it be more rapid, yet take place at such a rate as to be fairly called ‘gradual’, it will not secure the response of the normal frog under any circumstances.”

Aside from the lethal temperature for most frogs being 40 degrees Celsius – nowhere near “boiling alive” – the myth of the boiling frog would thus appear to be confirmed. However, most modern biologists dispute the reality of the phenomenon, citing both the scarcity of credible experiments and the everyday observable behaviour of frogs. Indeed, William Sedgewick himself admitted that many contemporary scientists, including M. Foster and J. Tarchanow, observed that frogs still tried to escape from 25-degree water no matter how slowly it was heated. More recently, scientists like University of Oklahoma Zoology Professor Dr. Victor Hutchison and Dr. George R. Zug, curator of reptiles and amphibians at the National Museum of Natural History, have openly refuted the notion, Zug stating that regardless of the heating rate, once an uncomfortable temperature is reached:

“…if a frog had a means of getting out, it certainly would get out.”

Scientists even refute the seemingly logical first premise of the myth – that a frog dropped in boiling water will jump out – with Harvard Biology Professor Douglas Melton stating:

“If you put a frog in boiling water, it won’t jump out. It will die. If you put it in cold water, it will jump before it gets hot—they don’t sit still for you.”

According to Melton, when exposed to extremely high temperatures, a frog’s muscles tend to immediately seize up. Thus paralyzed and unable to escape, death follows soon after.

Of course, none of these contemporary scientists have attempted to replicate the experiments of Goltz, Sedgewick, and others, for the simple reason that the boiling of frogs alive is rather frowned upon these days, despite mass killing of frogs for dissection of students being the gold standard of high schools the world over. Nevertheless, the general consensus is that, from more ethically-observable frog behaviour and experiments that do exist, it would seem to be the case that that the whole slow boiling frog thing so often touted as a thing is pure bunkum.

Speaking of frogs in liquid, for centuries, before refrigeration, an old Russian practice was to drop a frog into a bucket of milk. Why? As Dr. Albert Lebedev of Moscow State University notes: “[For] small portions of milk to drink, they used to put [a] frog inside… A small frog over there could prevent the milk from being spoiled.”

But does this actually work?

Well, kind of ya.

As to why, in 2010, scientists from United Arab Emirates University made an announcement that the secretions from certain frogs’ skins have antibacterial and antifungal properties. Using species native to African countries, they studied the compounds coming from the frogs, which are known as antimicrobial peptides and are a string of amino acids.

After isolating these compounds, they began testing them against various bacterial infections. For example, the dreaded “Iraqibacter,” a drug-resistant bacterial infection that has been known to hit wounded soldiers in Iraq could potentially be fought with a compound found in the skin of a mink frog that are native to North America. Secretions from a foothill four-legged frog may have the potential to fight the well-known resistant MRSA staph skin infection.

A Treatise About Frogs: On the Boiling, Swallowing, Eating, and Metaphorizing of Such, Clearing Customs, https://clearingcustoms.net/2019/01/19/a-treatise-about-frogs-on-the-boiling-swallowing-eating-and-metaphorizing-of-such/