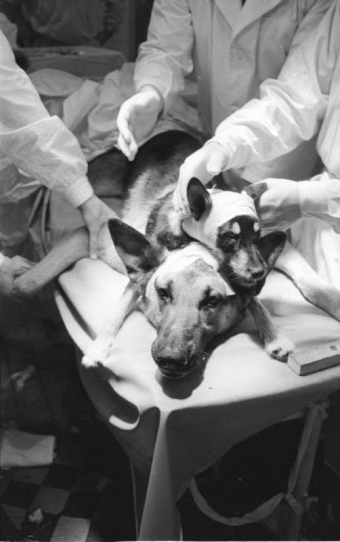 Medical science has advanced an astounding amount in the last 50 years or so and we can do things today that a half a century ago even in that era’s science fiction would have been considered science fiction. By the same token though, there were things done in the 1950s and 1960s that people today are still skeptical actually happened, like all those experiments that resulted in a bunch of two headed dogs.

Said experiments were conducted by one, Vladimir Demikhov, a Soviet scientist who is noted as being a pioneer in the field of organ transplantation. Dr. Demikhov was responsible for, amongst other things, pioneering the use of immuno-suppressants in organ transplants and designing the “first mechanical cardiac-assist device”, essentially the precursor to modern artificial hearts. With this latter device, Demikhov was able to take over the cardiac function of a dog for around five hours, an experiment notable for being “the first ever in which circulation was maintained in an animal whose heart had been excised”. Prior to Demikhov, this was a feat that many believed to be impossible.

Demikhov is also known to have performed the first heart transplant in 1946, in this instance on a dog; this was a full 21 years before the first human transplant took place and was a major step towards the latter ever happening. It has been noted that Demikhov was a genius whose “successes heralded the era of modern heart and lung transplantation”. Despite this glowing praise in some circles, his contributions have largely been overlooked outside of the medical community due to the infamy of his later, more audacious experiments.

This brings us back to the two headed dogs. Sometime in the early 1950s, spurred on by the success of his experiments involving the transplantation of organs in dogs, including several experiments in which he’d managed to successfully transplant multiple organs of the same type into the same animal, Demikhov began toying with the idea of transplanting the most valuable organ of all- the brain.

Demikhov is said have been inspired by the work of his peer, Dr Sergei Brukhonenko, another Soviet medical pioneer known for inventing a machine capable of artificially simulating the functionality of the heart and lungs, albeit on a temporary basis. Like Demikhov, the work of Brukhonenko is largely overlooked due to an experiment involving dogs. In Brukhonenko’s case, he infamously kept the decapitated heads of several dogs alive using the aforementioned machine for a number of hours, proving that it was possible to keep the brain alive and functional after almost unthinkable trauma.

Footage of these experiments appears in a documentary released in 1940 aptly titled “Experiments in the Revival of Organisms”. However, the veracity of this footage, which shows a decapitated dog’s head connected to a heart lung machine blinking and responding to various stimuli, has been the topic of heated debate for many years and even to this day, there’s no agreement on whether it actually shows what it claims. To be clear, Brukhonenko’s experiments on reanimation are well documented and there’s little doubt they actually took place as he claimed. However, there is some uncertainty about whether the particular documentary actually shows real experiments or whether it was a reenactment of sorts after the fact for propaganda purposes.

Getting back to Demikhov, his idea was as simple as it was shocking. He would prove that the brain, like any other organ, could be successfully transplanted by cutting the head off a dog, keeping it alive using the same technology as Brukhonenko had done, and then transplanting it onto the body of another dog.

All in all, it’s recorded that Demikhov performed this experiment “over 24 times” with varying degrees of success- success in this context meaning that the subjects survived the ordeal and even displayed some awareness of their surroundings and the ability to respond to stimuli. After successful transplants, the dogs typically died days later as a result of immune responses.

Of course, scientists being good scientists, many were skeptical that Demikhov could actually perform such a procedure successfully- they wanted direct proof. So to silence the skeptics, Demikhov invited LIFE magazine to document and photograph one of his experiments in 1959. The resulting article, titled “Russia Two-Headed Dog” documented the entire transplant procedure including the preliminary preparations, during which Demikhov introduced the journalist writing the article to the two dogs he was about to sew together, Shavka, a small 9 year old female, and Brodyaga, a large stray of which little was known. 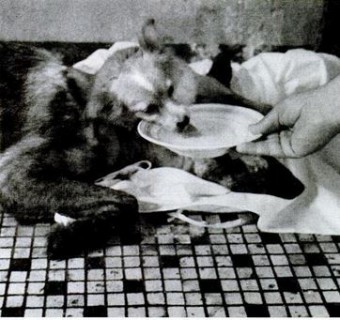 Demikhov then further “endeared” himself to any potential readers by saying that Brodyaga was Russian for “Tramp” and that he personally felt the dog was quite lucky since “two heads are better than one”. Prior to the actual operation, Demikhov also introduced the interviewing journalist to a dog called Palma, which he revealed had two hearts thanks to an operation he performed on the animal a few days earlier.

The article culminated in Shavka’s head and fore legs being successfully grafted onto Brodyaga’s body. The operation was such a success, in fact, that Shavka’s decapitated head was even able to lap a few mouthfuls of water from a bowl with some assistance, something Demikhov did purely for the cameras present as Shavka’s throat was not attached to Brodyaga’s stomach, meaning it couldn’t gain any nourishment from food or water via normal means.

In the end, the two dogs survived for four days before dying from complications of the surgery, which came as a surprise to Demikhov who revealed that some of his previous subjects had survived for as long as 29 days. 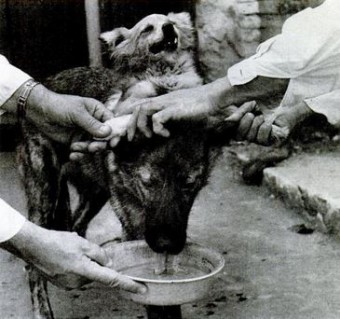 Despite the potential implications of Demikhov’s research, this particular bit of his life’s work was largely dismissed by the wider scientific community with the exception of a few scientists, most notably American neuroscientist Dr. Robert White, who infamously and successfully repeated the experiment using rhesus monkeys in the 1970s. While the two experiments were basically the same and set out to prove the same point- that a full head transplant was possible- there were a number of differences. Beyond the fact that a monkey head transplant is much closer to the procedure needed for a human head transplant, which is the end goal of this research, Demikhov had attached the head of one dog to the body of another, still living dog, while White went one step further and transplanted the head of one monkey onto a headless monkey body.

Doing this meant that, with the exception of the spinal cord, every major artery and even the windpipe and throat could be connected successfully to the new host body, allowing for more or less normal body function, other than the typical issues associated with paralysis. What’s more, the transplanted monkey head retained full awareness of its surroundings to such an extent that literally the first thing it did upon regaining consciousness was bite the finger of a medical assistant.

With these results in hand, White concluded that performing the same surgery on a human would soon be possible and that the person would not only potentially survive, but suffer few ill effects other than the obvious (then) irreversible damage to their spinal cord, something that wouldn’t be an issue for terminal quadriplegics, who White felt would be the best candidates for such a procedure. However, he also stated,

Whether such dramatic procedures will ever be justified in the human area must wait not only upon the continued advance of medical science but more appropriately the moral and social justification of such procedural undertakings.

Others have also taken up the research area despite the ethical controversy, citing the massive benefit such procedures would provide to countless individuals, such as those with terminal cancer, severe muscular atrophy, paralysis from the neck down, people with multiple organ failure, etc.- essentially, anyone who has an otherwise fully functional brain, but whose life support systems (in sum comprising their body) are failing in some way, which ultimately would cause the premature death of the brain. 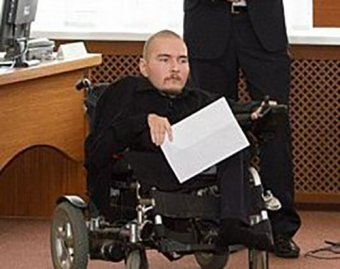 As to the current state of this brand of research, Italian neurosurgeon Sergio Canavero states that he expects the technology will be ready as soon as 2017 to perform a successful human head transplant. He even has a candidate lined up for the procedure, Valery Spiridonov (pictured right), who suffers from Werdnig–Hoffmann disease and whose health is declining significantly as he ages. For Spiridonov, there will come a time when his only hope of survival is transplanting his head to a donated body, at which point even a slim chance of success in such a surgery is preferable to the alternative.

Not satisfied to leave the head transplanted individual paralyzed, Dr. Canavero even managed to re-knit the spinal cord of a rat after severing it, allowing the animal to eventually regain control of its body. German researchers in 2014 also reported similar success repairing a severed spinal cord in a rat using a similar technique. Said Canavero, “This experiment is an important piece of our puzzle because now we know for sure that it is possible for a spinal cord to grow back together.”

Beyond Dr. Canavero, arguably the world leader in head transplants is one Dr. Ren Xiaoping of China who has led a team that has made significant advancements in the procedures in this arena. Dr. Canavero recently commented on Dr. Xiaoping’s work, “I can tell you that within the last 18 months, about 1,000 similar surgeries were performed in China, and I can say that this very rat (the one with the repaired spinal cord) is not the best sample. We will say more as soon as the information is published in the scientific magazines, because until then it is restricted by copyright.”

As for Dr. Xioaping, he noted of the ethics of the procedure that back when things like human heart transplants were first becoming a real possibility, there was just as much controversy surrounding if this area of research, let alone applying it to a human procedure, was morally acceptable or not, and that “many people say a head transplant is not ethical. But what is the essence of a person? A person is the brain, not the body. The body is just an organ.”  Essentially, the body is just a magnificent life support system.  For some, theirs fails resulting in an otherwise healthy brain that might have lived many more years dying as well.

Beyond practicing procedures on cadavers, presently Dr. Xioaping and his team have successfully transplanted numerous heads of rats and other animals onto new host bodies, including transplanting monkey heads, which, as previously noted, is a relatively similar procedure to transplanting a human head. Dr. Xioaping reported that (currently) a monkey head transplant takes approximately 20 hours to complete and he expects a human head transplant to take an additional 10-20 hours.

However, before Dr. Xioaping is willing to try the procedure on an otherwise terminal human patient, he stated that advancements still need to be made to ensure an extremely high probability of success. Towards this end, he and his team are working on improving methods to cut the spinal cord cleanly enough to allow for a high probability of reconnecting to the spinal cord in the new body, advancements in suppressing organ rejection, and ability to better maintain blood pressure to the brain throughout the procedure to ensure no brain damage.

Despite the technical obstacles remaining and some amount of public opposition to such human procedures, even if they ultimately are life saving for many with otherwise terminal conditions, Dr. Xioaping posited in March of 2016,

We are getting closer and closer to our goal of a human head transplant. I don’t have a timetable. It is very complex work. We can’t say it will happen tomorrow – but I am not ruling out next year.