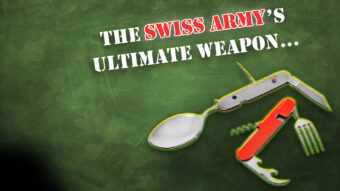 It can be found in the toolbox of every craftsman and mechanic, and in the pocket of every hiker, camper, and adventurer. It has appeared in countless books, movies, and television shows; travelled across scorching deserts, frozen tundra, and steaming jungles; plunged to the bottom of the ocean; and even rocketed into outer space. It is the Swiss Army Knife, a tool so iconic that its very name has become a byword for utility in any situation. But while these endlessly useful pocket knives have been wielded by nearly everyone from NASA astronauts to TV’s Angus MacGyver, have they ever been issued by the real Swiss Army? While it is tempting to assume that the name is just a clever marketing ploy, the Swiss Army does in fact use Swiss Army Knives, and the story of how these ubiquitous tools came to be is as fascinating as the endless uses to which they can be put.

The story of the Swiss Army Knife begins in 1889, when two technological developments led the Swiss Armed Forces to developed a specialized standard-issue pocket knife for its soldiers. The first was the adoption off the 1889 Schmidt-Rubin infantry rifle, which required a screwdriver to disassemble and clean; while the second was the increased use of tinned food for soldiers’ rations. In 1891 the Swiss Military standardized what became known as the Model 1890 Soldier’s Knife. A far humbler design than its modern descendants, the Model 1890 featured only four tools: a 100mm spear-point knife, a reamer, a flat-blade screwdriver, and a can opener. It also lacked the iconic red plastic grips, its panels instead being made of dark oak.

At the time, no Swiss manufacturer had the production capacity to meet the Army’s needs, so the Swiss Government placed an initial order of 15,000 knives with the German firm Wester & Company, which was completed in October 1891. However, Swiss surgical equipment manufacturer Karl Elsener was not pleased with this arrangement, and in 1891 his firm, based in the town of Ibach, began manufacturing the Model 1890 in the hopes of stealing the government contract back from the Germans. Unable to compete with Wester’s more cost-effective manufacturing process, Elsener produced the knives at a loss, and despite introducing various civilian pocket knife models such as the Student, the Cadet, and the Farmer, by 1896 his company was nearly bankrupt. It was then that Elsener made a breakthrough. While the Model 1890 was practical for the average soldier, it was also clunky and heavy, so in 1897 Elsener patented a more elegant version for officers, adding a small “eraser” blade for scraping ink off paperwork and a corkscrew to assist with officers’ busy social lives.

Further, perhaps the biggest breakthrough came when he figured out a way to put blades on both sides of the handle using a shared spring to hold both sides in place. This allowed him to put twice as many features into the multi-tool as was previously possible in this case allowing six tools locked by only two communal springs – a system that would become standard in all subsequent Swiss Army Knives. While never officially adopted by the army, the knife, marketed as the Schweizer Offiziers und Sportmesser – or Swiss Officers’ and Sports Knife – proved extremely popular among Army officers as a private-purchase item, and almost single-handedly saved Karl Elsener & Company from financial ruin.

In 1893, another firm, Boéchat & Company – later renamed Wenger SA – also began manufacturing the Model 1890 for the Swiss Military. In 1908, the Swiss Government withdrew its contract from Wester & Company and awarded it to Elsener and Wenger, the two companies splitting manufacturing duties 50-50. The following year, Elsener introduced its now-iconic logo based on the Swiss coat of arms and its distinctive red grips, the colour being chosen to make the knives easier to spot if dropped in the snow. Wenger soon followed suit with a similar rebranding, the two companies’s products being easily distinguished by the fact that in the Elsener logo the Swiss Cross is surrounded by a shield, while in the Wenger logo it is enclosed in a round-cornered square. Also in 1909, Elsener renamed his company “Victoria” in honour of his recently-deceased mother; in 1921 this would be further changed to “Victorinox” after“acier inoxidable,” the French word for stainless steel. The companies’ knives, however, would not acquire their famous name until the end of WWII in 1945, when American soldiers posted in Europe began encountering Model 1890 and 1908 Officers’ Knives in their post exchange or PX stores. Unable to pronounce the original German name, the soldiers simply called them “Swiss Army Knives.” The name stuck, and ever since both Victorinox and Wenger have marketed their products as “Original Swiss Army Knives.”

Over the decades, both companies have produced hundreds of models of knives and multitools for both military and civilian use, featuring an ever-expanding roster of tools and features including screwdrivers, wrenches, saws, fish hook removers, magnifying glasses, ballpoint pens, golf divot removers, tire tread gauges, butane lighters, clocks, altimeters, laser pointers, USB drives, and of course, knives. The largest practical Swiss Army Knife currently offered is the Victorinox Swisschamp, which features eight layers of tools performing 33 different functions. But even this is dwarfed by the Wenger 16999 Giant, a gargantuan promotional multitool measuring nearly a foot wide and featuring a whopping 87 tools and 181 functions – every single one the company offers. These are *deep breath*:

Not all proposed tools have proven successful, however. At one point Victorinox experimented with a knife incorporating a pencil sharpener, which was rejected as it produced an ugly bulge at the end of the blade. Also unsuccessful was a special knife for cutting cheese into precise, consistent slices, which, incredibly, failed to find a market even in Switzerland.

On the more practical end of things, since the debut of the Model 1890 the Swiss Military has officially adopted four standard-issue Soldiers’ Knives. In 1908 the Model 1890 was replaced with a slightly modified version featuring a clip point blade in place of the original spear point blade. This in turn was replaced by the Model 1951, which for the first time featured stainless steel blades as well as a scraper on one edge of the screwdriver. The first all-new standard issue knife was the model of 1961, which replaced the oak grip panels with more rugged knurled aluminium stamped with the Swiss coat of arms. In addition to the regular blade, this knife featured a reamer; combination bottle opener, flat-head screwdriver, and wire stripper; combination can opener and screwdriver; and a small brass spacer for holding open the mechanism of the SIG 510 combat rifle during disassembly and cleaning. The knife could also be suspended from a length of string to form a makeshift plumb-bob which, combined with a curved scale on the SIG 510’s bipod, could be used to gauge the angle of the weapon when launching rifle grenades.

The most recent knife in the Swiss arsenal is the Model 2008. A radical departure from previous Swiss Army Knives, the Model 2008 replaces the traditional elliptical wood, plastic, or metal grip with a more

ergonomically-shaped green polymer frame and features a serrated, one-handed opening blade; a wood saw; a combination bottle opener, screwdriver, and wire-bender; a combination can opener and flat-head screwdriver; a reamer; and a Phillips screwdriver.

Going back to the original question, since 1961, Victorinox and Wenger have been the sole official suppliers of pocket knives to the Swiss Armed Forces, and have also produced standard-issue knives for the militaries of many other nations, including Germany, France, the Netherlands, Norway, Malaysia, and the United States. However, the vast majority of Swiss Army Knives are sold on the civilian market, with Victorinox alone producing some 34,000 knives per year, generating annual sales of nearly $500 million. The distinctive red knives have become a cultural icon of Switzerland, gaining an enthusiastic following among a wide range of users from hikers, fishermen, and Scouts to golfers, auto mechanics, and even astronauts, with NASA officially adopting the Master Craftsman model in 1978 for use aboard the Space Shuttle. A Victorinox SwissChamp is even on display at the Museum of Modern Art in New York City as an example of classic industrial design. Swiss Army Knives have appeared everywhere in pop culture, most famously as the tool of choice for problem-solving ‘80s television hero Angus MacGyver. Indeed, the term “Swiss Army Knife” has become such a byword for practical utility that the title of 2016’s Swiss Army Man – a film about Paul Dano using Daniel Radcliffe’s rotting, farting corpse as a multi-tool to escape a desert island (no, really) – was instantly understandable to general audiences.

But after nearly a century of success, in 2001 Victorinox and Wenger nearly faced disaster when the September 11 attacks caused their products to be pulled from airport duty-free shops and in-flight catalogs worldwide. This eliminated two enormous sales channels virtually overnight, causing Victorinox and Wenger to lose nearly one-third of their revenue. In response, the companies chose to diversify, releasing a line of Swiss Army-branded water bottles, backpacks and other products. Victorinox also focused on winning the Swiss Army’s contract for a replacement for the Model 1961 knife, which despite a half-century of exclusivity had been put up for public bidding. Despite fears that they would be underbid by a Chinese manufacturer, Victorinox eventually won the contract and became the sole supplier of the Model 2008 Soldier Knife to the Swiss Military. Wenger was not so lucky, and in 2005 the firm went bankrupt and was acquired by Victorinox. Victorinox continued to market knives under both the Victorinox and Wenger brands until 2013, when they decided to abandon the Wenger brand and sell all its knives under the Victorinox banner. Wenger’s line of wristwatches and licensed products were in turn rebranded under the name SwissGear. Further trouble came in 2018 when the Swiss Federal Office For Defence Procurement or ArmaSuisse challenged Victorinox’s right to use the terms “Swiss Army” and “Swiss Military” in its marketing. After lengthy negotiations, Victorinox agreed to relinquish its claim to the words “Swiss Military” in exchange for retaining its iconic “Swiss Army” trademark.

Despite these dramatic shifts in fortune, more than a century after its founding Victorinox continues to manufacture a wide range of Swiss Army Knives to the same exacting standards. Timeless classics of practical design and utility, it is likely the trusty red knives will continue to be found in backpacks, back pockets, and tool boxes around the globe for decades to come.