Why Poison Dart Frogs Raised in Captivity Lose Their Toxicity 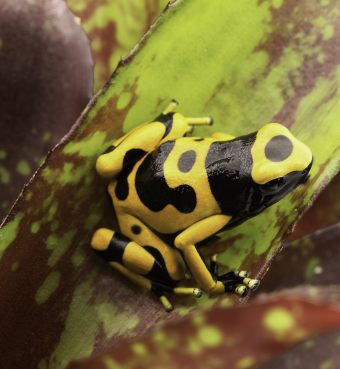 Of the 300-plus species in the frog family Dendrobatidae, only three members of the Phyllobates genus have been documented as having their poison used for hunting darts: Phyllobates aurotaenia (a.k.a. Kokoe), Phyllobates bicolor (a.k.a. Black-Legged) and Phyllobates terribilis (a.k.a. Golden). While in the wild these frogs harbor poison sufficient to kill a grown man, after they have been held captive for a time, they lose their toxicity.  So what’s going on here?

It turns out, the poison in these animals does not appear to be created by the frogs themselves, but rather is believed to come directly from their diets and then is secreted, unchanged, from glands in their skin.

The poison itself is primarily made up of three steroidal alkaloids: batrachotoxin, homobatrachotoxin and batrachotoxinin A. Together, these toxins affect both nerves and muscles primarily via messing with the normal function of voltage-gated sodium channels, causing a range of effects including cardiac arrhythmias and even heart failure.

So what do they eat to acquire these toxins? As an example, Golden poison frogs are known to feast on certain species of Brachymyrmex and Paratrechina ants, as well as some Choresine beetles, including Choresine pulchra and Choresine seiopaca. Recent scholarship has shown that the latter (the Choresine beetles) contain forms of BTX-A (BTX = botulinum toxin) as well as the aforementioned batrachotoxinin.

When spending their lives in laboratories and zoos, however, these frogs are typically not fed the toxic beetles, but rather eat fruit flies, mealworms, crickets and termites- none of which contain the alkaloid toxins. Further backing up this diet theory is a study done by Dr. John W. Daly, in which he fed a group of captive Dendrobatidae frogs that were initially not toxic a diet of arthropods containing the offending alkaloids. Later, those toxic compounds were excreted by the frogs’ skin unchanged from their pre-ingested form.