Mandy R. asks: In movies they always act like it’s important for a person to stay conscious when they’ve been seriously injured. Does that really help someone live?

Special thanks to Scott from the Medical Confessions podcast for answering this one for us! 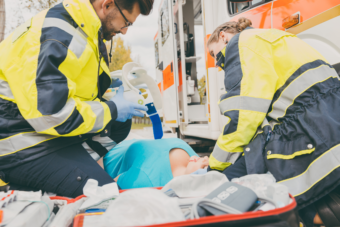 We’ve all seen movie scenes where someone is seriously injured and slowly drifting in and out of consciousness. Someone else there will inevitably yell something like, “Stay with me DAMMIT!!!” It’s even sometimes explicitly stated that it’s important for the person to stay awake to keep the Grim Reaper away. Towards this end, the person with them may even be shown to slap the person in the face and/or shake them in an attempt to keep them conscious.  This all brings us to the question of the hour- will staying conscious provide any benefit to someone who is seriously injured as depicted almost universally by Hollywood?

Well, no, not really.

In fact, unconsciousness may even mildly help in some cases. For example, one study, Tightly coupled brain activity and cerebral ATP metabolic rate, published in Proceedings of the National Academy of Sciences USA, showed when rats were intentionally knocked out, they produced about 50% fewer ATP molecules. (ATP being the energy that cells use to perform all their vital functions.) The net result of all of this was about a 66% reduction in energy requirements by the brain- potentially a very good thing if your body is already low on the necessary resources to keep on keeping on.

That said, there is one caveat here- being awake while you’re potentially succumbing to your demise can be very helpful for a medical provider in some cases. Namely, if it’s not obvious what’s wrong with you, you being able to communicate the cause of your situation, the specifics of the pain you’re in, or any pertinent history of the problem will help them more easily figure out the best way to treat you as rapidly as possible, which may make all the difference.

However, other than those benefits, when it comes to staying alive, being conscious isn’t a requirement in any way. Further, your level of consciousness and the change in it actually guides how an emergency provider will treat you, via the Glasgow Coma Scale.

First published by neurosurgery professors Graham Teasdale and Bryan Jennett in 1974 from the University of Glasgow, the scale is used to describe how impaired someone’s consciousness actually is.  It assesses a patient according to three general criteria: four parts for eye-opening, five parts for verbal response, and six parts for motor response.

As an example, we have the commonly known phrase in emergency medicine “A GCS less than 8, intubate”.  This basically means if your score is less than 8, your chance of maintaining your own airway for breathing is so low that it is recommended, and generally an extremely good idea, to stick a tube into the patient’s trachea and take over breathing for them.

Should someone have a score of 14 (confused, but otherwise normal), then all of the sudden have a score of 9 (the level at which Hollywood would have you slapping them incessantly), this would indicate a significant thing just happened and the provider will need to re-evaluate the treatment strategy and confirm or disprove what they think is going on.

Now, given that understanding the vast number of things that can cause someone to become unconscious will only illustrate one of them by putting you all into an incredibly deep sleep, let’s instead just talk about the high level generalities of the two main causes of unconsciousness pertinent to the topic at hand. When someone is potentially dying, it’s because of one of two things- traumatic injury or medical issue.

Looking at the source of most Hollywood movie plot-line unconsciousness, trauma, the two main things that will make you become unresponsive are exsanguination (bleeding out) and traumatic brain injury.

In the former case, if you were able to stay awake when bleeding to death, you simply would naturally- slapping or shaking not needed, nor beneficial. Why? Anytime you’re seriously injured you’re naturally going to have your sympathetic nervous system releasing epinephrine, nor-epinephrine, and dopamine.  These hormones will do things like increase your heart rate and constrict your blood vessels and pupils.  This results in the greatest amount of blood flow to your brain possible given the circumstances.

Along with this, whether conscious or not, your baroreceptors also continue doing their thing. Residing in an area of your carotid sinus (the beginning of your internal carotid artery) and in the arch of your aortic artery, these handy little mechanoreceptors sense a change in blood pressure and cause the body to react accordingly.  Too high a pressure and it will inhibit your fight or flight nervous system (sympathetic). This allows acetylcholine, the main neurotransmitter for your rest and digest nervous system (parasympathetic) to slow down your body’s heart rate and dilate its blood vessels, thereby decreasing your blood pressure.

On the flip side, if they sense too little pressure, like when your precious blood volume is being spilled onto the ground, it will stimulate your sympathetic nervous system to increase its heart rate and constrict blood vessels, raising your blood pressure.

Thus, slapping that person in the face and yelling at them to “Stay away from the light!!!”, will likely only see the medical professionals who arrive want to slap you in the face for potentially further injuring someone who is already barely clinging to life. That’s not to mention that while you were doing that, you were not doing what you should have been doing- applying direct pressure on the area of bleeding, which is easier and requires far less pressure than you might think to stop the bleeding, even for arterial bleeds.

And it’s not like direct pressure is rocket surgery. It involves simply taking your hand (hopefully gloved, or with some sort of barrier device to prevent the spread of disease) and placing it directly over the wound. Apply enough force to stop the bleeding. Even in the worst types of bleeding, you won’t need more than 3-4 pounds per square inch or about 27 kPa.

You should also have tried to immobilize any body part that looks out of place, so as not to have its movement cause any more damage. Thus, shaking or slapping the individual in a vain attempt to keep them conscious for… reasons we guess… is a bit counterproductive.

Moving on, should the cause of the unconsciousness be a traumatic brain injury (TBI), like a concussion or a bleed in the brain, slapping the person will at best do nothing and may well serve to make the injury worse.  Further, shaking or slapping someone with a TBI also comes with the potential risk of damaging their spinal cord.

Moving on to medical reasons for an altered level of consciousness, the causes are vast and can be difficult to nail down.  There isn’t always an obvious reason like in trauma where you might see the bullet holes or the bones sticking out of the skin.  In fact, there are so many that emergency medical providers use handy little acronyms like AEIOU-TIPS to make sure they’re thinking about all the potential causes when they’re treating you.

In any of these cases and so many more, the only thing forcing the person to stay awake will do is allow them to give a better history on what is potentially causing their problem. This can be incredibly helpful at speeding up optimal treatment. But it isn’t specifically going to help reverse the actual issue as is usually depicted in cinema, nor is your shaking or slapping going to aid at keeping them conscious anyway.  Just like in trauma, in all of these cases, the body already has compensatory mechanisms in place that will keep the person conscious if it can.

In the end, knowing a person’s body is already doing everything it can to stay away from the light, maybe instead of slapping them, just remember- direct pressure, immobilization, call for emergency medical aid, and, when all else fails, just lean down, smile, and say, “Look at me. We’re gonna be okay. You can rest now…” And maybe throw in a “I love you 3,000” just for good measure. You never know, it might just be your last chance to say it.