June 11, 2019 Karl Smallwood
MmmJeremy asks: If I’m drunk and can’t drive, could I legally ride my horse home instead? 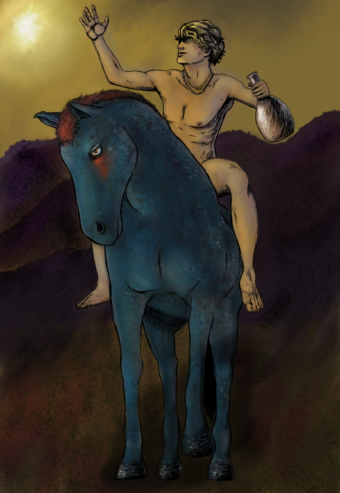 To begin with, in the vast majority of countries on Earth, “driving under the influence” is usually defined as “operating a vehicle after imbibing an alcoholic beverage or drug to the extent that [your] mental faculties are impaired”. So, given nobody in day to day speech would call a horse a vehicle, you might think you can’t possibly get cited for driving under the influence when riding one. But let’s dig a little deeper, because it turns out drinking and driving laws do indeed apply to horses in some cases. If you think that’s a little bizarre, just wait until the bonus fact later when we discuss the illegality of driving after you eat at Olive Garden in some countries.

In any event, as with seemingly everything to do with law, the answer to this question is complicated and varies not just by country, but sometimes within countries, like the U.S., by state.

With that caveat out of the way, for the easy answer- if the horse is pulling a cart, then almost universally yes the horse / buggy combo counts as vehicle. This is because in most regions almost anything with wheels on the road is considered a vehicle outside of some exceptions like wheel chairs, or in a few regions where a motor is explicitly required for something to be defined as a vehicle.

Thus, with exceptions like Montana whose definition of “vehicle” explicitly notes “except devices moved by animal power”, if you’re riding or driving a horse that is pulling some sort of cart on a road, you can potentially be cited for driving under the influence. For example, in December of 2009 in Lancaster County, Pennsylvania, police pulled over a 22 year old Amish man, Elmer Stoltzfoos, who was operating a horse drawn buggy on a public roadway while drunk. Although, “operating” is perhaps too strong of a word as Stoltzfoos was actually slumped over asleep in the buggy at the time, with the horse seemingly knowing the way home and taking him there along the road. When Stoltzfoos was subjected to a breathalyzer test, he had a blood-alcohol level of 0.18, slightly over twice the legal limit.

But what about if there is no cart? We’ll start with the easy one here as well- the UK, where it is indeed illegal to ride a horse while intoxicated. This is thanks to the Licensing Act of 1872 which, among other things, states “Every person… who is drunk while in charge on any highway or other public place of any carriage, horse, cattle or steam engine… shall be liable to a penalty not exceeding forty shillings or in the discretion of the court to imprisonment for any term not exceeding one month.”

As breathalyzers were not a thing back then, this law does not specify any precise level of intoxication needed, leaving it to the officer’s discretion.

Moving over to the United States, this varies from state to state, but many states classify horses as “vehicles” when on the road. This is done in a few different ways- sometimes explicitly in the original wording of the laws and defining of “vehicle”, other times via court cases where precedent has been established to help define that term, or in some cases having other traffic laws that directly deal with riding horses while intoxicated separate from any definition of “vehicle”. States that have such prohibitions on riding a horse while intoxicated include North Carolina, Kansas, Michigan, Florida, Oregon, and California, among others. Colorado is another state that very specifically prohibits riding horses while intoxicated, but in this case considers this a simple traffic violation rather than the more serious consequences that can from from being charged with driving under the influence.

That said, there are several states, such as Tennessee, Wisconsin, Texas, Washington state, New Jersey, and Montana, that have no such rules and it is entirely possible to ride a horse home from the bar after getting rather tipsy and not technically be able to be cited for “driving” under the influence. Interestingly, in the case of New Jersey, in 1898 there was a law on the books prohibiting “driving of any horse, mule or other beast of burden while under the influence of intoxicating liquor.” This law, however, was repealed in 1971.

All this said, it should be noted that even in these regions there are several other laws a zealous officer could still get you for, including even animal cruelty as you are drunkenly controlling a horse on a public roadway, potentially with cars around, and thus can be deemed to be placing the animal at significant risk. Other potential laws you could be considered to be violating include “public endangerment due to reckless behavior”, child endangerment (if you’re riding the horse near children or have one along on the horse), etc.

More likely you might be cited for public intoxication, such as happened on January 13, 2011 to two Texas men, Samuel Olivo and Jose Rios. Initially in this case, the men were charged with driving while intoxicated when they were seen riding a horse and a mule respectively through Austin. At the same time, they were also drunkenly attempting to get people to take pictures with them. Not just a little trousered, in the case of Jose, he was so drunk the officer attempting to administer the breathalyzer test found him incapable of completing the test. Jose later needed to be hospitalized for alcohol poisoning.

That said, despite the extreme level of intoxication, as alluded to, Texas law is one of those that stresses “motorized vehicle” rather than the more general “vehicle”. Thus, while the two men were initially charged for driving while intoxicated, this was later dropped and switched to a charge of public intoxication.

In yet another case of this, one Jake Williams of Louisiana hadn’t initially planned to ride his horse, Sugar, home, simply having him in his horse trailer at the time. But after getting properly medicated at a bar, he decided he was too intoxicated to drive home, so got his horse out of the trailer and attempted to ride it home, later stating his reasoning as, “When you get a little too much to drink, why not ride a horse? It’s safer that way. The horse knows the way home.”

Unfortunately for him, someone saw him leave the bar and mount the horse and called the cops on him. When the police found he was indeed quite drunk, they couldn’t charge him under drunk driving laws of Louisiana, so simply cited him for public intoxication.

But to sum up, it is technically illegal in many regions of the world to ride a horse while drunk. However, when a random citizen isn’t calling the cops on you and if you don’t appear to be doing anything unsafe or harassing anyone, even in regions where you can be charged with drunk driving if riding a horse while intoxicated, it would seem from the countless accounts we found of people doing this without any consequence to themselves, particularly in the UK, that it’s unlikely an officer would do anything.  After all, the police aren’t exactly typically on the lookout for people riding horses while drunk. So you’d need to make it pretty obvious to them in most cases or be doing something else illegal to draw their attention.