June 19, 2019 Daven Hiskey
zhiyu89 asks: When I was a kid we used to blow on Nintendo games if they didn’t work and I’ve always wondered if this actually did anything? 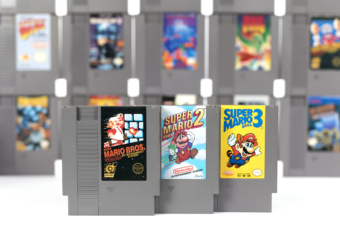 Once upon a time a seemingly universally known trick to get a Nintendo game cartridge to work was to simply pull it out, blow on it, then re-insert. If this didn’t give the desired result, this process was generally repeated until the magic happened. For the truly desperate among us, blowing inside the console opening itself was common practice in hopes that this would finally get the game to work. The general rational for why this worked was that it gave a better connection via blowing dust off the many pins. This all brings us to the question of the hour- did blowing your cartridge actually do anything?

To begin with, it is true that the root of the problem in question was almost always a bad connection between the internal connector and the pins on the game cartridge’s internal board. This was a notorious issue on the NES particularly which used a so called “zero insertion force” (ZIF) 72 pin connector. The particular insertion design for the NES was inspired by VCR’s- the idea being to differentiate the NES from top loading consoles of the day, give kids a loading method they were already familiar with, and potentially reduce the chances of kids breaking something when over forcing things as occasionally happened with top loader designs.

The ZIF connector here used pins made of nickel, bent slightly to give a spring effect. When the cartridge was inserted they’d bend slightly, and then spring back when the cartridge was removed. There are a few problems with this mechanism. To begin with, given very frequent insertions in an application like the NES, these pins were prone to losing their spring effect relatively quickly. Further, to achieve close to the stated claim of “zero insertion force” the pins on the ZIF connector weren’t that strongly springy to begin with.

On top of this, the pins on the cartridges were usually made of copper, making them already prone to eventually developing a nice layer of patina (think the green on the Statue of Liberty) whether you blew them or not, further making a good connection less reliable over time.

Moving on to the seemingly universally known trick of blowing on the pins both inside the case and in the cartridges themselves, this would impart moisture onto the metal, significantly increasing the development of forms of corrosion as well as potentially resulted in dust and other particles sticking to the pins. This can also very quickly result in the growth of things on the pins, like some sort of gamer inspired Petri dish.

On this note, while you might not think the moisture from your breath would make things that much worse, gaming guru and host of TheDPPodcast Frankie Viturello gave a good example of just the effect this could have. Viturello took two copies of the game Gyromite, one to be blown, the other to sit around on a shelf in the same room as the other. He then blew on the one copy ten times in quick succession each day, essentially in the same basic way gamers the world over do when trying to fix the game so it works.

Certainly a much bigger sample size and much more detailed data would be needed for more definitive results. (For example, it would be interesting to track the number of failures after insertion of a game, along with the number of blows, the humidity levels over time, etc. compared to a control group of games and consoles and then with a sample of years and many games and consoles tabulate all that and write a fascinating paper on the subject.) However, this much more basic experiment did very clearly demonstrate the significant effect blowing on the pins has, with the blown on pins developing a clearly visible layer of something over the course of the month and the 300 blows. Viturello’s conclusion here was nicely summed up, “Could this… be cleaned up post test and returned to 100% working condition? Sure. Probably. But right now it’s fucking gross.”

It is perhaps no surprise from all of this that when this blowing method of “fixing” cartridges that weren’t working in a given instance became popular, Nintendo themselves started explicitly stating in their NES Game Pak Troubleshooting: “Do not blow into your Game Paks or systems. The moisture in your breath can corrode and contaminate the pin connectors.”

And while bad connections did become less of a problem with the release of future consoles like the Super Nintendo and the N64, occasional blowing before insertion was still a thing, resulting in Nintendo actually putting a message on the back of every N64 game cartridge again saying not to blow on the pins.

In the end, unless there was a significant and very visible layer of dust or other debris on the pins, blowing on them wouldn’t have accomplished anything useful outside of a bit of moisture from your breath maybe helping get a slightly higher probability of a good connection on insertion. But even this potential extremely minor, if any, benefit would be significantly outweighed by the long term downsides of blowing on the pins. The real benefit of this blowing method was seemingly just that you were removing the cartridge and putting it back in, thus, re-seating it and giving the potential for a proper connection.

Finally, funny enough, while the blowing method was seemingly universally known despite it not really doing anything other than making the problem worse long term, there was one other drastically lesser known trick for fixing the issue that actually did work in some cases. This was wedging something (like another game pak) in the console between the game and the top of the slot. This put added pressure on the loaded cartridge which could, if done right, add pressure between the ZIF connector pins and the pins on the game board, thus making a better connection.

Ever wonder how the gun in the original Duck Hunt game knew if you actually hit something on the screen?  Well, wonder no more. The Duck Hunt gun primarily just consists of a button (the trigger) and a photodiode (light sensor). When you pull the trigger, this causes the game to make the TV screen go completely black for one frame. At this point, the game uses the light sensor to sample the black color it’s reading from your TV to give it a reference point for the given ambient light at the time. In the next frame, the game causes the target area to turn white, with the rest remaining black. If the game detects a shift from black to white from the gun’s photodiode in that split second, it knows you were aiming correctly at the target and so doesn’t specifically need to know anything about where on the screen the target is. For games with multiple targets at any given time, the same type of method is used except multiple target frames are shown. So the game will flash the black reference screen; then will flash one of the targets, leaving the rest of the screen black; then flashes the next target, again leaving the rest of the screen black; and so on. The game knows which target is hit, if any, by which frame is currently being shown when a light shift is detected.

Interestingly, if you read over the patent for the NES Zapper Gun, one of the main features they point out which separates their gun from previously patented light detecting guns is that in the “preferred embodiment” of their system, it has the ability to distinguish between multiple targets in one frame. However, that’s not actually what they did in the NES system as noted.

In contrast, in a “one frame” system, it uses a signal from the TV itself. This signal is in the form of pulses which signify the start of the horizontal and vertical retracing. The computer hooked up to the TV can use these pulses to more or less tell what area is currently being traced on the TV; it can then time this with a shift in light detected by the photodiode. Thus, with precise enough timing, it is able to detect which target is being hit in just one frame.

With this method, the flash can happen fast enough that it’s nearly imperceptible to most people, unlike in the actual NES system where when multiple targets are shown, most people can perceive the flash. The NES system did use the vertical retrace signal to be able to detect the start of each frame though, but didn’t use it to detect anything about the position of the target as in the “preferred embodiment” described in the patent.