May 14, 2019 Daven Hiskey
Killimimes asks: Why do they have the “speak now or forever hold your peace” part of a wedding and what happens when someone objects? 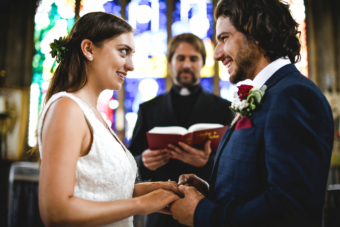 While it may come as a surprise to many, it turns out the whole, “If anyone can show just cause why this couple cannot lawfully be joined together in matrimony, let them speak now or forever hold their peace” is actually a required part of the ceremony among certain church groups unless special dispensation is made in those cases. So what happens if someone actually objects and where did this part of the ceremony come from?

As for the first question, in modern times in the vast majority of cases, nothing would come of an objection here, though there are exceptions. For an example of where nothing is likely to occur, if someone were to object on the grounds of their undying love for one of those being wed or because they didn’t think a given person was suitable for the other, in all likelihood the ceremony would proceed without the person officiating the wedding even acknowledging the objection.

You see, a key part of that question is “why this couple cannot lawfully be joined…” Thus, if someone were to object, say, on the grounds that they had knowledge that one of those being married was already married, or perhaps the couple were too closely related, one of them was being forced into it against their will, some form of serious, fraudulent misrepresentation by one of the betrothed was occurring, etc., then the minister in question would be required to stop the wedding right there and investigate the claim.

Of course in modern times, this is highly unlikely to ever occur even where some version of this question is required because of the process in acquiring a marriage license in many countries and the extensive data officially kept on people.  Thus, the various ways in which someone could object in a way the officiator of the wedding might have to look into, should that be a requirement in a given church, are already sorted out before the ceremony itself ever takes place.

This all brings us around to where the whole “speak now or forever hold your peace” came from in the first place. As for the exact phraseology, this was popularized in the Christians’ Book of Common Prayers in the marriage liturgy section, with the original version of this work popping up in the 16th century with many versions created since, including most notably the 1662 version which is the basis for most today. This work also helped popularize such other common phrases as “Till death us do part”, “Earth to earth, ashes to ashes, dust to dust,” and “Peace in our time.”

As to the ultimate origin of this idea, it came about thanks to a few changes to marriage law within the Catholic church in and around the 12th century. Essentially biblical scholars of the day were attempting to figure out how to properly define what a marriage really was, when it started exactly, and what was required to make it happen. Many of these changes were made to try to make it easier for people to wed, which was deemed a good thing to keep people from sexual sin.

This all culminated in Pope Alexander III decreeing that two people were married when they both declared such to one another in the present tense. If done in private, this created a clandestine marriage. The problem, of course, was this allowed people who the church would not normally deem legally able to marry given church rules to get married anyway. This also allowed some unscrupulous individuals to take advantage of, say, a buxom young lass by declaring his marriage to her privately and then deny he ever did so the morning after, or a variety of other similar situations.

These were problems that needed solved, leading to the 1215 Fourth Lateran Council which, among other things, decreed

[W]e absolutely forbid clandestine marriages; and we forbid also that a priest presume to witness such. Wherefore, extending to other localities generally the particular custom that prevails in some, we decree that when marriages are to be contracted they must be announced publicly in the churches by the priests during a suitable and fixed time, so that if legitimate impediments exist, they may be made known.

Thus, the reading of banns (simply meaning “proclamations”) was born, initially among Catholics and later spreading to certain other Christian groups. For three consecutive weeks during the Sunday services the proposed marriage was announced and it was asked that anyone in the community come forward if they knew of some good reason why the two people should not be allowed to marry. This would also be asked one final time whenever the actual wedding ceremony itself took place.

As for valid reasons that would be considered, this included the aforementioned things like if one person was being coerced or already married, not old enough to marry (though if the parents themselves didn’t object on this point, it could be overlooked), etc.

It’s also important to note here that just because no one spoke up did not mean the church might not annul the wedding after the fact if some new information came to light. It was just a way to try to lower the odds of something like that happening by polling the general public before hand.

While the banns and the question being posed during an actual wedding has long since stopped being a thing among many church groups (or at least optional), particularly as civil laws governing marriages and pre-screening have more and more come to take precedent, they are still a requirement in a select few church groups anyway. For example, with the Church of England, the banns are still usually required, though this requirement can be potentially worked around in various ways, such as, with the right set of circumstances, the Common License procedure or a Superintendent Registrar’s Certificate. If the marriage ultimately takes place without the banns, the local bishop may in that case also simply require some penance by the couple to cease the marriage being considered illicit in the eyes of the church.

Not just for objections, however, the banns also provide time slots for a church congregation to pray for the couple and function as an official announcement of the intention to marry, which is in part why they are still kept around in some church groups and generally seen as a good thing, despite the somewhat antiquated part about checking for any reason the couple should not be allowed to marry.