Why Does Vladimir Putin Walk So Weird?

September 12, 2017 Melissa One comment
Zach L. asks: Why does Vladimir Putin walk with one arm moving and the other stuck at his side? 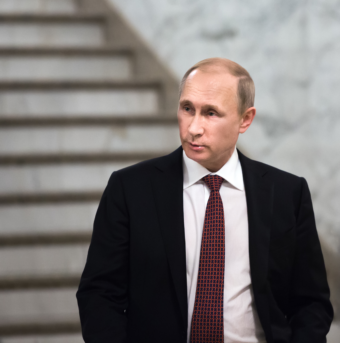 While there is no single correct way to walk, most of us have a gait where we swing each arm forward when its opposing leg moves forward; likewise, as with the length of the stride, which is generally the same for both legs, the distance of the arm swing is usually about the same for both the left and right arms. While exactly why humans do this hasn’t yet been definitively proven (with the most popular theory being that, while not essential, it’s mostly about improving balance and decreasing angular momentum of the body), the fact remains that this is how the vast majority of humans all over the world walk… But not so with Vladimir Putin, President of the Russian Federation.

For those who’ve never seen Putin’s rather odd walk, as is more common, when Putin walks, his left arm swings freely forward with his right leg stride. However, when his left leg strides forward, his right arm barely moves at all, remaining nearly still and close to his torso. This has resulted in some idly speculating that maybe there is some neurological cause for the gait, perhaps even a sign of Putin being in the early stages of Parkinson’s disease, as reduced arm swing is a potential early indicator (though generally with tremors in the limb or other such additional indicators as well). (Incidentally: The Man Who Parkinson’s Disease is Named After Was Implicated in a Plot to Assassinate King George III.) Others have speculated Erb’s palsy or even a minor stroke might be the underlying cause.

The problem with all of these hypotheses is that Putin not only has full use of his right arm and hand for day to day activities like writing, eating, etc., but even likes to show off his prodigious Judo skills, as well as strength in weightlifting. In both cases, the right hand and arm seemingly show no sign of weakness, tremors, etc. Combined with the fact that Putin’s had this gait for many years without change, this all seemingly rules out any of the aforementioned potential causes.

So what’s going on? Well, thankfully as Putin himself has never commented on it as far as we can find, a team of doctors, led by movement disorder specialist Dr. Bastiaan Bloem, decided to look into the matter, publishing their paper on the subject in the British Medical Journal in 2015. In it, they came up with an intriguing and quite probable hypothesis as to why Putin walks this way.

In their paper, titled “Gunslinger’s gait”: a new cause of unilaterally reduced arm swing, They noted that Putin was once a long-time member of the Soviet Union security agency known as the KGB (1975-1991). (In fact, he eventually rose to the rank of Lieutenant Colonel within that organization before leaving it during the brief August Coup attempt against President Mikhail Gorbachev.)

Showing off their research skills, the doctors dug up the book, KGB Alpha Team training manual, which, if you go read through that manual, contains the following text (Chapter 2) concerning the proper way to move:

…it is absolutely necessary to keep your weapon against the chest or in the right hand.  Moving forward should be done with one side, usually the left, turned somewhat in the direction of movement.  You should crouch to stay concealed.  Lean the body forward slight and keep the knees bent.

While Putin forgoes crouching and the like when walking around in public, his gait otherwise very much mimics the one recommended in the training manual, with presumably his right hand staying mostly stationary at his side holding an imaginary gun or otherwise prepared to draw such a non-existent weapon at need.  In other words, perhaps because it was so grilled into him in training, or simply because he thinks it looks cool when he’s walking with that so-called “gunslinger’s gait,” he seems to have chosen to keep the walk long after his KGB days ended.

Now, on its own this reference in the training manual doesn’t definitively prove anything. It’s still just speculation by the doctors in question. To give more credence to their hypothesis, the researchers presumed that if it was really the KGB training that cause this peculiar walk, Putin wouldn’t be the only one that walked this way.

Thus, they examined the walks of other Russian military and/or former KGB officers, finding several Russian officials today that also displayed the seemingly bizarre walk. Most notable among this group are Prime Minister Dmitry Medvedev, former ministers of defense Anatoly Serdyukov and Sergei Ivanov, and a military commander of high rank, Anatoly Sidorov.

Like Putin, Ivanov was a KGB official, and thus this seemingly supported the hypothesis that strict adherence to KGB training led to Putin’s now lifelong habit of walking with one arm more or less fixed at his side and body ever so slightly turned. In addition, although not KGB, Sidorov was a member of the Russian military and Serdyukov had served at least one year in the Soviet Army where this particular type of movement was similarly taught. In all of these cases, these individual’s walks aren’t quite as extreme as Putin’s can sometimes be, but they definitely display the same basic pattern of movement.

The one that doesn’t fit the mold, however, is Medvedev, who has no direct links to the military or intelligence services, but still walks this way at times. That said, in his case, he seems to have very actively been coached to mimic Putin’s iconic walk, expressions, and even speech patterns during the process of being groomed to potentially follow Putin as President, which he subsequently did from 2008-2012.

Of course, without confirmation from Putin himself, nobody can really know why he walks this way, but given the lack of any other signs of a neurological issue that might cause such a gait, that the movement pattern is described well in the KGB training manual, and that at least some other ex-KGB operatives also display a similar walk, this certainly seems like the most compelling hypothesis anyone’s come up with so far.