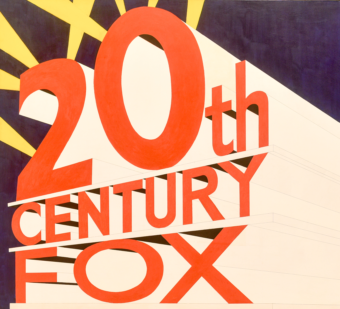 In 1987 Fox became the first broadcast network that really gave ABC, CBS, and NBC a run for their money.

In 1935 two Hollywood movie studios—Fox Pictures and 20th Century Pictures—merged to become one of the most dominant companies in show business, 20th Century Fox. Its finances grew rocky throughout the 1960s and ’70s, but stabilized for good in 1977 when it produced what was to date the most profitable movie ever made: Star Wars.

With its finances in order, Fox put itself on the market, and was quickly purchased by two billionaire investors, Marvin Davis and Marc Rich. But while the studio was now stable, its owners were not. In 1985 Rich fled the U.S. when it was discovered that he had made illegal business deals with Iran during the 1980 hostage crisis, and also owed $100 million in taxes. (Famously, President Bill Clinton pardoned Rich hours before he left office in 2001.) Suddenly stuck with a giant movie studio and no business partner, Davis unloaded the company to News Corporation, owned by Australian publishing magnate Rupert Murdoch.

Murdoch hired former ABC vice president of development Barry Diller to run 20th Century Fox. Diller was a TV guy, having invented the made-for-TV-movie and later helped produce shows such as Laverne & Shirley, Taxi, and Cheers. And that abiding interest and experience in television is what drove his plans at 20th Century Fox. He didn’t want to produce movies—he wanted to use the movie studio’s resources to develop a new TV network.

Though apprehensive—“fourth” networks other than the Big Three had been proposed and fizzled out a dozen times since the 1950s—Murdoch gave Diller a green light. First order of business: buy some “seed” stations, or instant Fox TV affiliates, to attract advertisers. In 1985 Fox acquired Metromedia, a consortium of six independent stations. Diller then secured affiliate agreements with 90 unaffiliated local stations across the United States.

While News Corp. had plenty of money to spend on the new network, Murdoch didn’t want to waste it by directly challenging the Big Three networks on prime time, their strongest turf. Instead, the Fox Broadcasting Network’s first show was The Late Show With Joan Rivers, on October 9, 1986, at 11 p.m.

The Late Show was not a success, but it put the network into the public consciousness. By spring, executives decided that Fox was ready to attempt prime time. They began conservatively: one night consisting of two shows, airing on Sunday, which, at the time, was the least-watched night of the week. On April 5, 1987, at 8 p.m., the first prime-time Fox show aired: Married…With Children. After that, at 8:30 p.m., came The Tracey Ullman Show, a modern variety show. Both were moderate hits—Married aired for 11 seasons; Ullman would stick around for four and spin off its cartoon segments into one of the most successful TV shows ever, The Simpsons.

DAYS OF THE WEEK

After that first night, Fox added a new show each Sunday until it had a three-hour Sunday-night lineup. First was the hour-long police drama 21 Jump Street (starring Johnny Depp), then the comedy Mr. President (about the president’s family life, starring George C. Scott), and then the romantic comedy Duet.

Programming for the rest of the week was also rolled out in a leisurely fashion. A Saturday lineup appeared three months later, in July 1987; Monday would be filled in 1989, Thursday and Friday in 1990. Full, seven-nights-a-week programming was finally in place by January 1993.

Although Fox had some popular shows, it still wasn’t getting the respect accorded to the other networks. That would change when the new network outbid CBS in 1994 for the National Football League, which had been with CBS since 1952. After the shockwaves subsided, Fox was finally seen as a real network, more or less equal to the other three. In 2003, Fox became the most-watched network overall, on the strength of its top-rated talent show American Idol.