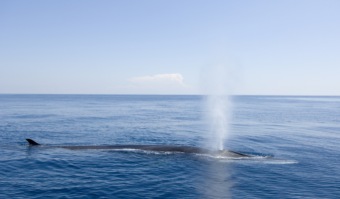 Some refer to the rock-like substance as “floating gold” because of its hue and value. (For reference, 175 pound, 79 kg, lump of it was recently found floating off the coast of Qurayat, netting the fishermen who found it a cool $3 million when they sold it at auction.) Others call it “ambergris,” derived from the Old French “ambre gris,” meaning “grey amber.”  But perhaps the most accurate way to describe the prized, rare, hard lumpy substance found floating in oceans and washed up on beaches worldwide is excrement- whale excrement, to be exact.

Ambergris is a strong smelling, waxy-feeling, whale emission that’s been used for centuries by humans in perfumes, medicines, foods and, apparently now, cocktails. For much of human history, it was a complete mystery as to where this substance came from. That all changed though, in 1724, when Boston physician Zabdiel Boylston (who was also the first to introduce the practice of inoculation in the American colonies, at great personal risk to himself in doing so in that case) revealed in the scientific publication Philosophical Transactions that ambergris came from sperm whales. He primarily supported his assertion by noting an account of a whaler who claimed he found 25 pounds of it in the gut of a whale he killed. Given ambergris will invariably have squid beaks embedded in it, it was presumably easy enough to put two and two together.

On that note, while it’s often claimed that where exactly ambergris came from is a much more modern discovery (let alone what part of the whale it came from), even for those who failed to note the obscure reference by Zabdiel Boylston, it’s surprising they missed Herman Melville in the mid-19th century devoting a full chapter of Moby Dick (Chapter XCII) to it. In it, he explicitly noted where it came from and gave interesting insight into its use at the time,

NOW this ambergris is a very curious substance, and so important as an article of commerce, that in 1791 a certain Nantucket-born Captain Coffin was examined at the bar of the English House of Commons on that subject. For at that time, and indeed until a comparatively late day, the precise origin of ambergris remained, like amber itself, a problem to the learned… ambergris is soft, waxy, and so highly fragrant and spicy, that it is largely used in perfumery, in pastiles, precious candles, hair-powders, and pomatum. The Turks use it in cooking, and also carry it to Mecca, for the same purpose that frankincense is carried to St. Peter’s in Rome. Some wine-merchants drop a few grains into claret, to flavour it.

Who would think, then, that such fine ladies and gentlemen should regale themselves with an essence found in the inglorious bowels of a sick whale! Yet so it is. By some, ambergris is supposed to be the cause, and by others the effect, of the dyspepsia in the whale…

I have forgotten to say that there were found in this ambergris certain hard, round, bony plates, which at first Stubb thought might be sailors’ trowsers-buttons; but it afterwards turned out that they were nothing more than pieces of small squid bones embalmed in that manner.

Despite this very prominent reference, among others, ambergris is still today often mistakenly referred to as whale vomit. But, as previously noted, it is actually closer to whale poop.

So how is ambergris made within the whale?

In a nutshell, ambergris is produced when a sperm whale has an upset stomach, as Melville very astutely noted. While sperm whales eat things like crab, octopus, fish, shrimp, and small bottom-living sharks, they love squid. Normally, the hard beaks of squids are vomited back up by the whale, but occasionally, the beaks sometimes pass through into the intestines. Notes Christopher Kemp, molecular biologist and author of Floating Gold: A Natural (and Unnatural) History of Ambergris,

Curved like a parrot’s beak, the squids’ [indigestible] beaks pass from the stomach, chafing and irritating the delicate intestinal lining on the way. As a growing mass, they are pushed farther along the intestines and become a tangled indigestible solid, saturated with feces, which begins to obstruct the rectum. It also acts as a dam. Feces builds up behind it. The whale’s gastrointestinal system responds by increasing water absorption from the lower intestines, and gradually the feces saturating the compacted mass of squid beaks becomes like cement, binding the slurry together permanently. It becomes a concentration- a smooth and striated boulder.

At the same time, a fatty bile-like substance is secreted inside of the intestine that ultimately surrounds the sharp beaks and more or less blunts their points, as well as helps the mass slide its way through the whale. In the end (literally), the substance mixes with partially digested mass as described and is eventually secreted.

When it’s first expelled into the water, ambergris is pretty much as you’d expect- it’s dark colored, viscous and smells like fecal matter. But microbes, the sun, air and saltwater work their magic on the mass while waves slowly degrade it. Eventually, it becomes gray and waxy, but still retains chunks of squid beak as previously noted. It also stops smelling like poop once it’s aged enough. People have variously described the aged smell of ambergris as earthy, piney and tobacco-like.

And while it may seem strange, long before Melville’s account, humans have been sniffing, eating, and rubbing this whale excrement on their skin, with the Ancient Egyptians known to have used it in incense, the Chinese, among others, using it as an aphrodisiac, and many throughout history using it for various medicinal purposes, including the Persians using it as a medicine to cure heart problems.

King Henry V (1386-1422) and King Charles II (1630-1685) often included it in their decadent meals. In fact, King Charles’ favorite meal was supposedly eggs and ambergris. So unlike those who consumed it for its supposed medicinal purposes, it would appear some, like this royal pair, simply enjoyed the taste.

As to what eating eggs and ambergris is like, King Charles II’s affinity for it spurred the aforementioned author Christopher Kemp to try the whale excrement with an egg-based recipe from the 1685 cookbook, The Accomplisht Cook, by Robert May. Kemp reported,

It crumbles like truffle. I fold it carefully into the eggs with a fork. Rising and mingling with curls of steam from the eggs, the familiar odor of ambergris begins to fill and clog my throat, a thick and unmistakable smell that I can taste. It inhabits the back of my throat and fills my sinuses. It is aromatic—both woody and floral. The smell reminds me of leaf litter on a forest floor and of the delicate, frilly undersides of mushrooms that grow in damp and shaded places. Although present in only very small amounts, the cholesterol-rich ambergris coats my tongue and the inside of my mouth with a greasy film.  I try to rinse it away by drinking water and eating dry slices of bread, but it remains for an hour or longer.

Speaking of more modern times, ambergris was all the rage in various perfumes in the 20th century, with it not only lending its scent to the products, but also reportedly helping the perfume adhere to the skin thanks to its slightly waxy nature. Of course, due to the rarity of the substance, most perfume makers have long since switched to alternative substances to try to achieve the same scent and properties, including using synthetic ambergris, with the first of those developed in the mid-20th century by Swiss chemist Max Atoll.

One ambergris dealer, Frenchman Bernard Perrin, however, notes that some perfume companies still occasionally purchase it for use in some of their more exclusive lines.  He also states, “We also sell it to a royal family in the Middle East and they use it as an aphrodisiac. Apparently they take some milk, some honey, and grind up small quantities of the amber and put that in as well…”

So, for those who have the money and want to indulge in the ultimate decadence of eating or rubbing bits of aged whale excrement on their bodies, ambergris is still available thanks to the tireless efforts of ambergris hunters the world over, who no doubt are just a phone call away from getting their own History Channel show.

Yes, while stories do pop up now and then seeming to indicate it’s always a random happy accident when individuals find their lotto ticket of ambergris washed up on a beach, it usually isn’t. There’s a whole network of sometimes very organized ambergris searchers looking to cash in. According to Kemp, there are even groups of very dedicated people who engage in sometimes violent turf wars in hopes of finding a chunk of the stuff. Said Kemp in an interview with Atlas Obscura,

These people have their own language and taxonomies, and I love the idea that they’re out there trying to find this strange stuff, which, after all, was shit out by a whale, and then weathered for years by the elements…