The El Chapo of Orangutans 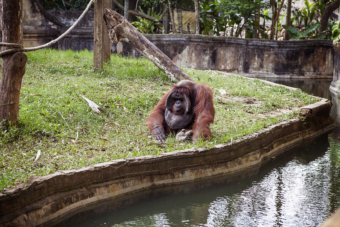 Possessing a fine mind for strategy, mechanically inclined, with true and loyal friends, and a fair amount of luck, the greatest zoo jailbreak artist of all time, Ken Allen, was the El Chapo of orangutans.

Born at the San Diego zoo in 1971, Ken’s early life was marked by sadness when he had to be removed from his mother’s care, as zookeepers felt she was on the verge of smothering him to death. Named after two of his rescuers, Ken Willingham and Ben Allen, after removal he became rather comfortable with the humans who helped raise him.

Perhaps zookeepers should have anticipated Ken’s later escapes since, even as a young adolescent, according to the San Diego Zoo, he would regularly unscrew the bolts in his cage at night, roam the nursery, and then return and put his cage back together in the morning. Suspecting something was amiss, the zookeepers ultimately caught him at this and his nightly fun was ended.

As with human teenagers, when Ken was 14 he decided to test his boundaries, and made his first pen escape on June 13, 1985 by climbing up and over the retaining wall of his enclosure. Friendly and confident, Ken reportedly calmly strolled along with patrons of the zoo observing other animals before zookeepers learned of his escape and were able to lead him back to his cage, which he was seemingly perfectly happy to re-enter.

Although zoo officials feared Ken’s escape would create a PR disaster, as he was so mild-mannered about the whole thing, the opposite happened and Ken ultimately became a folk hero – to the point that “Free Ken Allen” shirts and bumper stickers began to appear, and there was even a song, The Ballad of Ken Allen.

Not wanting a repeat performance, zoo officials beefed up security in his pen, including installing a large moat with a massive wall to keep the 250 pound orangutan in. However, just a few weeks later, on July 29, 1985, Ken escaped again. This time, however, he decided to use his time a bit more productively and went to the pen holding his archenemy, an orangutan named Otis. When zookeepers arrived, they found Ken pelting Otis with rocks.

On August 13, 1985, Ken called upon his ingenuity again, and found a branch of sufficient size and strength to use as like a crowbar; enlisting the help of one of his lady friends, an orangutan named Vickie, Ken instructed her on how to pry open an exit using the branch. Successful, Vickie freed both of them, although they were once again captured almost immediately.

After the third escape, Ken was moved for a time while zoo officials spent thousands of dollars investigating his enclosure, including even hiring experienced rock climbers to find every finger, toe and foothold in the enclosure.

Further attempts were made to improve the design of his enclosure via attempting to watch Ken probe his pen for potential escape spots.  However, Ken soon seemed to figure out what his captors were trying to do and simply ceased such attempts when zookeepers were watching. In response, said individuals had to resort to dressing up as tourists to clandestinely observe him.

Finally as a sort of general security improvement, zookeepers ran an electric fence wire along the top of the exterior wall of Ken’s enclosure and turned it on. This prevented at least one escape when Ken managed to once again make it to the top of said wall, but this time was zapped and retreated back into his cage, seemingly defeated for good.

Au contraire! Ken had merely been biding his time, and two years later he escaped when the moat’s pump went offline, which dried it up sufficiently for Ken to walk across and hoist himself up and over once again.

This time, according to reports, Ken didn’t return so quietly as in previous escapes. When the fuzz came to take him back to his home, he took off – giving the zookeepers a bit of a fright as he was heading directly toward the lion pens where they feared he might climb inside. That potential crisis was averted, however, as the zookeepers were able to catch him before he made it there.

Seeking to distract him from attempting to escape again, and thinking maybe he was a bit jealous of Otis who lived with three lady orangutans, zookeepers put four females in with Ken, “hoping to turn his wanderlust into just lust.”

This completely backfired, however, as Ken recruited his new friends to join in his escapades. A few months later, two of his protégés, Jane and Kumang, found and transformed a five-foot squeegee left behind in the pen into a tool to, once again, scale the wall. Jane made it all the way to the flamingos before having to be tranquilized, but Kumang returned to the enclosure agreeably.

This was the last of Ken’s and his friends’ escapes. In total, the zoo reportedly had to spend approximately $45,000 to make Ken’s enclosure escape proof over the course of his escapades.

Sadly, although orangutans in captivity can live up to 60 years, Ken, only made it to 29. In 2000, he was diagnosed with B-cell lymphoma. While normally an attempt might have been made to treat his cancer, particularly given his young age, his case was deemed to be terminal, so rather than put him through the difficult treatment with almost no chance of it being successful, on December 1, 2000, he was euthanized.