Do Trees Poop and Pee? 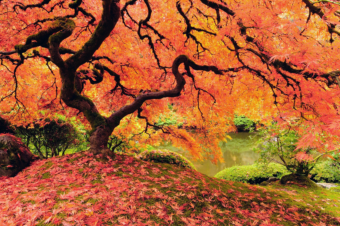 A wise man once said, “Everybody poops.” Well that should probably be changed to everything poops, because all living things excrete waste. This brings us to a brilliant question posed by a reader whose head we’d love to crack open and see what’s going on inside- do trees poop? As it so happens, yes they do, though there is a bit of a semantic argument to be had over what one might consider “tree poop.” (A sentence I’ve never in my life thought I’d have need to write.)

To begin with, all living things excrete things they no longer need or which otherwise might be harmful to them if allowed to build up in said being’s system- yes, everything from the lowliest single celled organisms to blue whales do this. In fact, a microbe known as Paramecium caudatum has been observed passing solid, liquid and gaseous waste, meaning it technically poops, pees and farts, despite its entire being consisting of a single cell. So what exactly do trees excrete?

Well, although trees produce very little in terms of pure waste, due to tremendously efficient metabolic systems that convert most everything the plants take in into something they can make use of (and a generally good nutrient acquisition system that ensures many things that would otherwise be bad for the plants aren’t taken in at all), nothing is perfect and trees will invariably need to excrete a number of things to remain healthy- the most well known of course being oxygen.

Now oxygen, which the tree, like any aerobic life form, does need but invariably has an excess amount of as a natural byproduct of photosynthesis, is mostly expired, along with other gaseous waste, through small pores in the leaves of a tree known as stomata. Trees also excrete water vapour containing various other waste products during this process. While this is an excretion, you may not consider this akin to pooping and peeing, perhaps more like breathing. After all, humans expel carbon dioxide, water vapour and certain other substances while breathing.

So what’s something the tree does that is more like pooping and peeing? In regards to the latter, some, but not all, plants occasionally expel water and other waste via a process known as guttation. In a nutshell, guttation occurs when excess water is taken into the roots resulting in an upwards pressure within the tree that must be gotten rid of; this most commonly occurs at night when the stomata are generally closed, robbing the tree of one way it may get rid of such excess water. The result of this root pressure is a sticky sap, consisting of sugar, water, and various other substances, including waste compounds, being pushed out of water stomata or hydathodes in the leaves.

What about tree pooping? Plant cells contain large vacuoles that are variously used either to store essential nutrients or waste the plant no longer has use for. In regards to the latter waste, plants concentrate it in parts of its anatomy that, while also potentially serving other purposes throughout those parts’ lifecycle, are nonetheless “destined to fall off or die”, like leaves, petals, or even fruit.

The waste, which in turn sometimes also serves a useful purpose but nonetheless must be gotten rid of lest it build up and ultimately harm the tree, including things like heavy metals, tannins, oxalates, and anthocyanins, will naturally be lost come wintertime for many trees or just at random times throughout the year for evergreens. As famed biologist Brian J. Ford notes, “the leaf… not only [is] the plant’s photosynthetic centre, but also [is] the organ which, at the end of its anabolic programme, is stripped of vital constituents and systematically charged with metabolic wastes.”

As a noteworthy example of this, mangroves are able to thrive in saltwater, despite too much salt being harmful for the plant and that they otherwise don’t need large amounts of salt to survive. (In fact, many mangroves will, in fact, grow just fine in fresh water.) They achieve this partially as they are adapted to filter with their roots sometimes as much as 90% of the salt from the water they take in, which is quite remarkable considering such strong osmotic pressure would normally result in water being drawn out of roots rather than being absorbed (see our article How Do Trees Get Water from the Ground Up to Their Leaves?). Any salt the plant does imbibe is then ultimately excreted through a combination of various processes, most significantly by the plant concentrating the salt in older leaves and bark which will be periodically shed.

So given that many plants, such as trees, use their leaves and other eventual droppings as a way to get rid of waste, we’d just like to explicitly point out that when you’re eating many types of fruit, or drinking that delicious cup of tea, you’re kind of eating and drinking bits of plant “poop” that are included…

Beyond things shed, many trees also store waste in their innermost tissues, for instance, heartwood which is sometimes considered to be dead upon formation, though some argue otherwise as it’s still able to react chemically to certain things, such as various organisms that may cause decay in the tree if introduced.  Nonetheless, this wood no longer plays an active role in the growth and metabolism of the tree, making it a safe place to concentrate waste materials the tree cannot get rid of other ways, or not get rid of fast enough elsewise.

In addition, trees may also expel waste through their roots, as has been observed via introducing an otherwise toxic substance to a portion of a tree’s roots. For example, in one such study doing just this, it was later found that the toxic substance taken up by certain roots had later been in turn excreted by the rest.

It should also be noted that, as previously alluded to, many plants and trees excrete things in a variety of ways that also very much have a purpose beyond letting something build-up within their system. For many of these things, some don’t consider them akin to poop, while others do, as they may largely be made up of metabolic waste or other substances that could be toxic to the tree if not regularly excreted. For instance, some plants and trees are known to intentionally leach harmful waste products into the surrounding soil or from its leaves or bark as a defence mechanism. This can take the form of compounds that kill, trap, or deter pests from eating the plant, like latex which among other things does include chemicals that are toxic to the plant itself. Some plants, such as the Scots pine, even produce waste products with antibacterial properties, helping to protect them from disease.

So in the end, while to some extent whether trees poop and pee or not, and which mechanisms constitute doing this, is an argument in semantics, they do unequivocally expel metabolic waste and other harmful substances in a variety of interesting ways- which ones are most analogous to pooping, peeing, farting or burping, we’ll leave for discussion in the comments.