April 25, 2017 Karl Smallwood
Ryan asks: If the president has a pet dog, do their bodyguards also watch over his dog like they do his family? 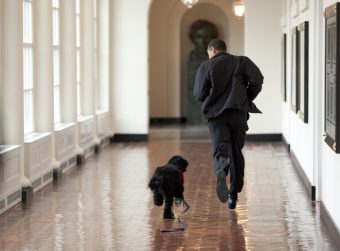 Even before the U.S. president is elected such, if they’re considered a “major candidate” for the job, they get offered Secret Service protection. Whether they accept that protection or not, once elected until the day they die (unless they opt out after leaving office), they will be shadowed by an elite team of Secret Service agents. These individuals, while not actually sworn to do so (contrary to popular belief), are generally expected to, if necessary, give their lives to keep the president safe. While in office, this protection extends to a president’s immediate family. But does this ever include their family pet? Technically no.

According to former Secret Service agent Dan Emmett, as noted in his book Within Arm’s Length, the agents tasked with protecting the First Family are under no obligation to protect any pets said family may own. In fact, he noted that even beyond not directly having any obligation to protect the animals, “Walking the dog or cat is not and will never be a part of an agent’s job description.”

Emmett put this little tidbit in a section of his book specifically dispelling myths about the Secret Service. This is a section that humourously enough also includes this gem of a supposedly widely held myth:

Myth: All women are attracted to Secret Service agents.

never-ending string of temptations sometimes literally thrust into one’s face by women who are impressed by such things as men who protect the president.  It can be almost frightening at times when seated in a bar, and a woman recognizes and agent she has just seen on television with the president.  On more than one occasion, my shift mates and I had phone numbers and hotel room keys shoved into our hands or thrown to us while working a rope line with the president…. For the single agent, it was paradise; for many married agents, it was a constant struggle between good and evil, which was sometimes won and other times lost.

Back to literal dogs (as opposed to the cheating kind)- although the Secret Service isn’t obligated by any means to walk or take care of the president’s pet dog or cat (Emmett tersely claims that White House custodial staff do this), it doesn’t mean they don’t necessarily do it.

For example, Bo and Sunny, the pet Portuguese Water Dogs of the Obama’s, were often pictured being taken for a walk by some member of Obama’s protective detail. Given there were presumably other staff available for the task when necessary, we can only assume they did this because of scenarios like that the president was in the midst of doing so himself when called away for a moment (so they had to take over temporarily), and perhaps because they liked to walk the dogs, so weren’t quick to call other White House staff in. After all, it stands to reason that Secret Service agents who spend a lot of time around the president would occasionally grow fond of the president’s pets, assuming they liked the type of animal, and thus wouldn’t mind the occasional pet detail.

Said agents have also been known to do such things as a favor to the president. For instance, the Secret Service agents tasked with protecting Ronald Reagan after he left office occasionally ran around Reagan’s ranch with his dogs when the former President was physically unable to do so.

In all such cases, one would think, despite not being obligated to, they’d even potentially help protect the pet if necessary. Sure, maybe not protect them with their lives as they’re expected to do with the human members of the family, but presumably they’d give it their best go if someone tried to pull a canine assassination or the animal was going to be hit by a car or something. In fact, the Secret Service is known to actively take precautions to keep a president’s pet(s) safe at least in some cases, including things like muzzling their own attack and guard dogs when they’re around the pet(s).

And while Emmett never mentioned it, keeping track of the president’s more mobile pets must be somewhat of a priority given that presidential pets are generally given near total freedom to come and go as they please and have essentially unlimited access to the president.  First Dogs then arguably have more power than most of the president’s own advisers, seeing as they can walk into his office any time and lick his face without upsetting him (something we presume only the First Lady, or certain interns of yore, could otherwise get away with).

Why would the Secret Service care what said animals get up to? This unscreened freedom of access is potentially a major security risk if the animal in question wasn’t being well kept track of. After all, someone could potentially get an explosive device or the like within a large enough dog (perhaps forcing or otherwise coercing them to swallow it or… you know, insert it into the other end). Beyond this, pathogens, toxic substances, etc. could be clandestinely planted on or in the animal’s fur in the hopes the president would soon after pet the animal.

So presumably the Secret Service keeps tabs on that it is at least somebody’s job to ensure the animals that have unrestricted access to the president and their family never ventures into unsecured locations or the like, even if it’s not the Secret Service’s job specifically to keep track of the animal(s). (And yes, very unfortunately so-called “suicide bomber animals” are occasionally a thing, one of the more famous cases of this being the sad tale of The Exploding Anti-Tank Dogs of World War II.)

On a lighter note, it should be noted that beyond having people wait on you paw and paw and having the ability to poop in the Oval Office, being the president’s animal also has other perks, including potentially a pardon from any crime you may commit.

You might think that last one sounds like a joke, but it’s only partially so. For instance, in 2008, President Bush’s beloved dog, Barney, bit two people- Heather Walker, public relations director for the Boston Celtics who got her wrist bitten, and Jonathan Decker, a Reuters reporter who got his finger nipped. Given the many and diverse microbial flora that call a dog’s mouth home (yes, contrary to popular belief, a dog’s mouth isn’t anywhere close to “cleaner” than a human’s), the pair were given antibiotics to prevent potentially dangerous infection as part of their treatment.

For any other dog, such repeated behavior may well have resulted in it being put down, whether the owners wished it or not. However, even without the presidential pardon “get out of jail free” card, there are not many individuals who want to risk becoming near universally hated for pursuing the matter of getting the president’s dog “put to sleep”. Of course, if such a bitten individual tried, it would be interesting to see if the presidential pardon powers legally extend to animals… (And if you’re curious: Why Do Presidents Get to Pardon People at the End of Their Terms?)