The Hand of Faith 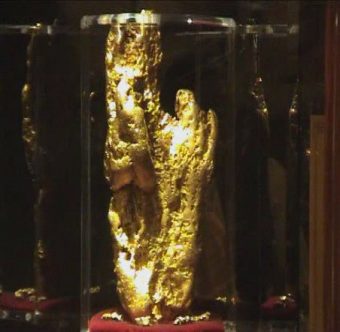 Sitting in the back of a dark, old-fashioned Las Vegas casino sits, rather unremarkably, the largest gold nugget on display in the world. Slowly spinning on a table in a place not uncoincidentally named “The Golden Nugget,” the so-called “Hand of Faith” gold nugget is not as glamorous nor as shiny as cartoon gold nuggets would have you believe. While the rock gets visitors, the foot traffic does not match its monetary value – which is said to be worth approximately $5 million.

So, how did the largest displayed gold nugget on the globe end up here in Las Vegas? Here’s the tale of the Hand of Faith’s discovery and its journey to Sin City.

It had been a rough few months during the fall of 1980 for the Hillier family traveling around Australia. For the last two years, the young family of six had been driving up and down the country’ coast in a bus they had named “Gus.” Father Kevin earned money for the family doing odd jobs, but that type of work had dried up due in large part to severe back injury. Mother Bip had just given birth and had her hands full dealing with a new baby. In a nutshell, the family was broke, with very little food and in dire straits. In this state, they settled in a small former gold rush town called Kingower near Victoria.

Much like in America (See: What Sparked the California Gold Rush?), Australia experienced their own gold rush in the mid-19th century.  While glittering stones had been found prior, it was on February 12, 1851 that the rush really began with the discovery of gold near Bathurst in New South Wales. Within months, people from all over the world had flocked to the island continent in search of their own riches. Within decades, the population of Australia nearly doubled from the influx of gold seekers from across the globe. However, also like America, the market just as quickly collapsed.

By the turn of the 20th century, the gold fields were more or less abandoned, with the recent immigrants moving to the rapidly modernizing cities. Despite this, and even years later, there were reports of lucky people coming across small gold nuggets. Discoveries in the late 20th century led many to think that the fields still had enough gold in them to forever change the fortunes of those who found it.

After his back injury, Kevin Hillier was advised by doctors to spend as much time as he could walking. So, Kevin and his wife Bip took up strolling through the former gold fields with a metal detector. In Bip Hillier’s book about her family’s story, she describes constantly praying for them to find gold. She thought her prayers had been answered when Kevin came home one night with a small gold pebble, but it turned out to only be worth enough to buy a second metal detector. This wasn’t exactly fortune-changing gold. But a few nights later, Kevin supposedly dreamed that he found an endless gold nugget that was so big that it could not be dug out of the ground. The next morning, he drew a picture depicting his dream on a piece of paper and had his friend Russell sign it as a witness.

Whether coincidence from having gold on his brain or indeed prophetic, on September 26, 1980, the dream would come true. After lunch, Kevin and Bip were detecting in opposite directions when Kevin screamed. Rushing to him, Bip found her husband on the ground sobbing while kneeling in front of a tip of a gold nugget that couldn’t be pried from the ground directly.

As a result, they began to dig… and dig and dig until they finally reached the bottom. Lifting it up, they realized what they had found was history. Weighing an astounding 27.2 kilograms (nearly 60 pounds), it was the largest gold nugget ever found by a hand held metal detector and the second largest discovered in Australia in the 20th century. In a recent interview, Bip claimed that the couple had some heavenly intervention, “People will say it was all coincidence and that’s fine. But that’s my Father up there…and he’s interested in everything we do.” To them, the rock looked like a hand making a blessing. So, Bip and Kevin named the gold rock the “Hand of Faith.”

Scared to tell anyone, they rushed it home and soaked the sixty-pound chunk in the sink. The kids all helped to clean it with toothbrushes. That night, the family slept as the gold sat in a kiddie pool under the parents’ bed. After a few days of debate about what to do, they decided to hand the rock over to a trusted friend to take it back to Melbourne for a delivery to the government.

A few days later, at a televised press conference, Victorian Premier Dick Hamer announced the discovery. However, the Hilliers were not there. They were hold up in a motel room watching the press conference on television, refusing to be identified. Said one of the Hillier kids, “Even for years afterwards, we kids never brought it up.”

It took several months for the nugget to sell (according to Bip, this was the government’s fault and caused the nugget to dip in value as the hype died down a bit), but finally in early February of 1981, with the help of Kovac’s Gems & Minerals, it was sold to the appropriately-named Golden Nugget Casino in Las Vegas for about a million dollars (approximately $2.7 million today).

In the years after, Kevin and Bip continued to walk those same fields with their metal detector in hopes of finding what they described as the Hand of Faith’s companion – the “Foot of Faith.” They never did and Kevin Hillier died in 2014. At the funeral, the original metal detector and a replica of the giant nugget were placed next to his coffin. His ashes were spread at the site of his discovery.  The metal detector is now stored in Bip’s garage. Although Bip’s now in her late 70s and her husband is no longer alive, she still thinks about going back out to search. “I do wonder,” she told the Monthly in late 2016, “what might still be out there.”