The Surprisingly Reasonable Answer to the Age Old Question- Why Do We Drive on Parkways and Park on Driveways?

October 11, 2016 Karl Smallwood
Eric J. asks: I know it’s an old joke, but seriously, why do we drive on parkways but park on our driveways? There has to be a good reason we say it this way, right? 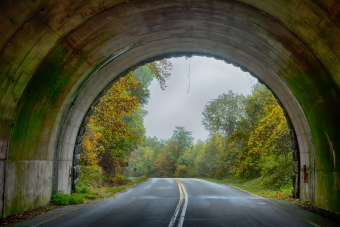 To most people the fact that we drive on parkways and park on driveways is rarely pondered upon. This only comes to mind when pointed out by particularly cringe-worthy comedians, who no doubt are also likely to muse on why the Royal Mail service delivers “post” while the U.S. Postal Service delivers “mail”. But once pointed out, it does all make you wonder…

As it turns out, there’s a perfectly valid explanation for why we drive on parkways and park on driveways- the majority of words have been around longer than cars and many have seen their definitions evolve over time, as parkways and driveways have likewise evolved.

For example, if you went back to the 19th century, you’d find one of the definitions of “park” was:

To put strips of lawn down the centre or along the side of (a street, the main streets of a city)

Before this, the term had originally been applied to enclosed private game preserves, sometimes around large estates of the aristocracy in Europe. For instance, in the Charter of Friðuuald of Surrey (1260): “Bitwiene ðe shrubbes and Wine⁓briȝt goinde adun norðriȝte binuðe ða parkes gate.”

Later, it began to refer to any well-kept grounds around an estate, then to any well landscaped grounds, whether private or public.

Shortly before automobiles became a thing, “parking” referred to the act of planting trees, shrubbery and other assorted foliage while the term “parking place” could generally be understood to mean an area designated for these various flora and fauna- essentially an area where plants were put not for agricultural usage, but simply to provide a pleasant place to soak up nature. This is why the word “park”, even today, can refer to a designated large, potentially wooded, area filled with greenery and sometimes wildlife.

As for when the word “park” and its various derivatives became associated with a stationary vehicle, this unsurprisingly occurred in the early 20th century when automobiles were becoming more popular. You see, prior to the mass adoption of cars, for reasons that will soon become clear when we explain the origin of the term “parkway”, the area around and sometimes in parking places (areas of greenery) would occasionally be used to temporarily store horses and the carriages they pulled, if any.

When cars began to appear on the roads, the practise of using these same type of parking places to store them naturally continued as well. One of the first such references to such an area specifically designated for cars occurred in Lion’s Share by Arnold Bennett, published in 1916: “Audrey’s motor-car…was waiting in the automobile park outside the principal gates.”

As such, the term “parking place” came to mean a place where one would store a car when it wasn’t in use, regardless of whether that area was particularly well landscaped with plants or not.  (Additionally, sometime around the mid-20th century “park” added a new definition to mean the act of bringing a car to a complete stop in such a designated area.)

Going back to the late 19th and early 20th centuries, as previously alluded to, many cities in the States began to construct parks filled with trees and the like to contrast the bleak, depressing walls of concrete that cities were quickly becoming filled with. This provided citizens with a nice area to relax and enjoy nature and was generally thought to improve health.

In the late 19th century, a landscape architect called Frederick Law Olmsted (the man who designed Central Park in New York and helped popularize the idea that people’s homes should have grass lawns, see: Why Do We Have Grass Lawns?) suggested that these types of parks should connect the surrounding cities and towns (in his original proposal connecting suburban parks with parks in the cities)- what he originally referred to as “pleasure roads”.

The initial idea behind these proposed thoroughfares was that they’d be used for the 19th century equivalent of commuting to and from the city, whether via walking, riding a bike, horse, or in a carriage.  To make the journey as pleasant as possible, the roads would be “parked”, or flanked with trees and greenery, to make them more scenic. So, in a nutshell, they were narrow, exceptionally long parks that allowed for relatively fast travel between the suburbs and cities.

As with parking places, these “parkways”, as they came to be known, were later repurposed and constructed mostly for use by automobiles- becoming more about fast travel than the scenery.

So the fact that you drive, not park, on a parkway makes complete sense in this context.

So what about the fact that we park on driveways?

According to the Oxford English Dictionary, the definition of a driveway is as follows:

A private carriageway for a motor vehicle alongside, in front of, or leading to a house, garage, or other building; a drive.

This definition has more or less been the same for about a century and a half, dating back to the first known instances of the word being used in the 1870s. What has changed, however, is the size of driveways.

Back in the 19th century, a driveway in the context of leading to someone’s home was often a much longer road than is typical today, at least outside of cities where people had driveways. While houses with smaller driveways existed, the idea of them being used to store a car did not because cars didn’t really exist yet (at least not for most, see: The Husband and Wife Team That Gave the World the First Car and the First Road Trip That Saved It From Obscurity). Driveways at this time were just used for walking or riding a horse or carriage up to your home, with the latter two generally stored in a barn or stable if you had one, or a field if not.

Even when cars became a thing, driveways weren’t necessarily used to store or “park” cars because, again, there was often space off the road, such as a barn, ample land, and eventually dedicated garages.

It was only as driveways became shorter and shorter due to the rise of suburbia and cars (and home ownership) became accessible to the masses, who didn’t necessarily own large plots of land and trappings like buildings to store cars, that car-sized driveways began to be commonly used as a place to “park” ones car. The rise in popularity of manicured grass lawns in the late 1940s also made this even more of a necessity so as not to ruin one’s lawn if you were to pull off the dedicated tiny driveway.

Today, many who live in a country with relatively large plots of land still primarily use their driveways for driving, rather than parking. But for everyone else in suburbia, outside of a potential garage, one’s driveway is probably the only place on the property to park a car.

So as with most things that seem to not make sense when one lacks data on a given subject, the fact that we park on driveways and drive on parkways is perfectly reasonable once the context is understood.

Since we have a little time and space left, let’s answer another question we’ve had once or twice- is there a law against blocking someone’s driveway?  The answer, at least for our UK readers is surprisingly, no.

Yes, in jolly old England there is virtually nothing you can do if someone decides to park in front of your driveway, even if it completely blocks you in. This is due to the fact that the Highway Code, which dictates the laws of British roads, only applies to public roads. Since a driveway is considered a private road, many of its rules don’t apply. In fact the only rule pertaining to obstructing driveways appears in paragraph 243 of the Highway Code where it says: “DO NOT PARK in front of an entrance to a property”.

However, as this lawyer notes, the only rules and provisions enforced by law in the Highway Code are preceded by the qualifier “YOU MUST NOT”, meaning the part about obstructing someone’s entrance to their property is more of a guideline that motorists are free to ignore if they wish. As a result there are people in the UK who’ve been prosecuted for damaging cars that are quite literally stopping them from leaving their home.

This unusual quirk of British motoring law coupled with the fact that you can largely park anywhere on a public highway in the UK as long as it doesn’t contravene specific parking restrictions, means there is an opportunity for a lot of mischief for someone with enough time on their hands. As you’d expect from this, there are numerous instances in the UK of people blocking people in their own driveway just because they can.

In the US, however, things are a little clearer cut and it is absolutely considered a crime in most states to purposely block someone’s driveway with your car. This is great for motorists, but bad for fans of stories about people burying people’s cars in gravel for blocking their driveway.