October 24, 2016 Karl Smallwood
David J. asks: How did the tradition of putting photos of random naked women in some newspapers start? 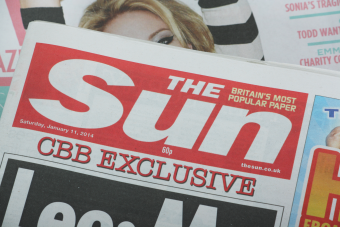 We British are often stereotyped as being prudish and stoically reserved in all aspects of intimacy. As such, it may surprise non-natives to learn that for over four decades, one of the most popular newspapers in the entire country had a large picture of a topless woman on the third page for no other reason than that she was an attractive lady showing off her wobbly bits.

The idea of supplementing a newspaper’s editorial content with pictures of women in various states of undress came about after Rupert Murdoch acquired and relaunched The Sun in 1969. Prior to Murdoch’s acquisition, the paper was a broadsheet aimed at, according to its original founder, the “sophisticated and superior middle class”. When the paper failed, Murdoch bought it for £800,000 (about £11 million today) and re-branded it as “a straightforward, honest newspaper”.

The Sun quickly established a foothold in the editorial landscape thanks to the oversight of editor Sir Albert “Larry” Lamb, who adopted the nickname “Larry” in homage to Larry the Lamb of Children’s Hour. Under Lamb’s leadership, the paper began pushing sensationalist headlines and stories- yes, BuzzFeed-esk journalism existed long before the internet. For example, literally the first headline that November 17, 1969 edition of the paper ever ran under Murdoch’s ownership was “HORSE DOPE SENSATION”. We can only assume they didn’t precede those words with “YOU WON’T BELIEVE THIS…” due to space limitations.

Beyond the click-bait-like headlines, Lamb maintained that sex should be a primary component of the paper’s content, reasoning that, next to TV, it was probably the most important aspect of his readers’ lives, so the most likely to sell more papers. Towards this end, Lamb saw to it that a picture of that month’s Penthouse Pet, Ulla Lindstrom, wearing a half unbuttoned blouse was included in that first edition for no particular news-related reason. Elsewhere, they also included a full spread picture of a nude blonde woman lying at the feet of the Rolling Stones.

Over the coming months, the paper continued to periodically feature images of scantily clad women on its third page. In a time before this sort of thing was available to everyone at a click of a button, as you might expect, this greatly increasing readership amongst males. In fact, just one month after Lamb took over The Sun, readership had risen from 850,000 to 1.26 million. After one year, it had grown to two million.

Not stopping with scantily clad women, Lamb decided to up the ante, with the first topless “Page 3 girl” coming on its first anniversary. This went on to be one of its most popular issues up to that point. Doubling down on this success, The Sun began to feature more and more half naked women culminating in it becoming a daily feature by the mid-1970s. This inexplicably coincided with The Sun becoming the most popular paper in the whole of the UK, with daily sales swelling to four million by 1978.

The success of the paper and their Page 3 feature was such that many other papers in the UK, such as the Daily Mirror and the Daily Star, followed suit. While the latter still maintains the tradition of including lady bits for no particularly newsworthy reason, the Daily Mirror quashed the practice in the 1980s citing that it was, to quote, “demeaning to women”. (Aside: when the Daily Mirror is taking the moral high ground over you, you know you might want to take a moment to reevaluate your decision making paradigm.)

Despite the questionable nature of some of his paper’s antics, in 1980, Prime Minister Margaret Thatcher managed to obtain a knighthood for Larry Lamb for his “services to journalism”. It should probably be noted that in the election of 1979, despite not being “a Conservative newspaper” the paper strongly supported the Conservatives, such as in their feature “A Message to Labour supporters” where they stated, “Vote Tory this time: it’s the only way to stop the rot…” The Conservatives subsequently managed to win a majority in the House of Commons and Thatcher was made Prime Minister. Within a year, Larry Lamb became Sir Larry.

Back to the Page 3 feature- according to Lamb, his intention was to use it to showcase “nice girls”, and that he wanted it to be “breezy, not sleazy”, further quoted as saying that “big-breasted girls look like tarts”, so should not be featured. For anyone unfamiliar with British vernacular, “tart” can be understood to have a similar meaning to the modern definition of the word “slut”. That said, anyone who’s taken a look at the archives for Page 3 girls- which I did a deep dive on in order to satisfy the extremely thorough research requirements the editor here at TodayIFoundOut mandates for all articles…- can see, this “no big-breasted girls” rule wasn’t followed very closely. Either that or Sir Lamb and I have very different definitions of what constitutes “big breasted”… (Incidentally, “slut” used to have an entirely more innocent definition just a few hundred years ago, see: Why Women are Sometimes Called “Broads”, “Sluts”, and “Dames”).

In any event, despite the success of his paper, partially because of Page 3, in his later life, Lamb would come to regret introducing the feature at all. He also lamented the blatant sexism in the workplace that was so common in his heyday, once snapping at his journalists,

Cut out nudges, winks and leers. Always have second thoughts on stories about the jockstrap world of men only. Remember, women not only smell better; they work harder and deserve better.

He also gave the female editor of the topless section, Joyce Hopkirk, veto control over what content was published there.

But to the surprise of no-one, the feature has proven to be contentious with the public right from the start. This is something The Sun was grateful for in its early days, as it worked like free advertising when other newspapers would feature articles bashing The Sun for their pictures of topless women. As Lamb noted:

The more the critics jump up and down, the more popular the feature became.

And, indeed, it’s telling that a paper best known for including topless women on its third page abruptly rose from nearly going out of business to the best selling newspaper the UK for four decades straight after introducing that feature.

To add further controversy to the whole thing, the topless women shown for no other reason than to be eye-candy were occasionally only 16 years old, such as editions featuring Maria Whittaker (in 1985) and Samantha Fox (in 1983). (And if you’re curious, see: How was it Decided What Age Makes You an Adult?)

Though often criticised, the feature had and still has steadfast defenders who argue that sex, nudity and cheeky double entendres are nothing to get worked up about and are even to a certain extent hallmarks of British culture. To be fair, there is truth to this, but opponents note that it’s difficult to ignore that the photo is there for no news related reason, with the contention being that in this context it objectifies women.

Despite this, The Sun has traditionally remained staunchly defensive of their Page 3 exploits and pushed back against every attempt to remove or otherwise censor it, even going as far as publicly labelling female members of parliament “fat and jealous” when certain MPs criticised it in 2004…

When Rebekah Brooks took over as head editor of The Sun in 2003, most thought the Page 3 feature would finally go the way of the dodo, as Brooks had previously argued that it hurt readership numbers in modern times and thus should be removed. But after taking the reins, she changed her tune and began championing it, even writing an editorial explaining why there was nothing wrong with Page 3, including rightly noting that the models featured were, “intelligent, vibrant young women who appear in The Sun out of choice and because they enjoy the job.” (On this note, being featured on The Sun’s Page 3 did indeed help launch many a young woman’s successful career in modeling.)

However, cracks began to emerge as early as 1994, when Rupert Murdoch himself noted that the feature “just would not be accepted” in any other paper that he owned. In a 2014 interview, Murdoch mentioned that the paper might replace the topless photos with more conservative glamour shots of models; he also openly noted in that interview that the feature was “old fashioned”.

Murdoch’s comments were praised by activists for the “No More Page 3” campaign. This was started in 2012 after actress Lucy-Anne Holmes noticed that, despite the successes of British female athletes at the 2012 Olympics, the largest picture of a woman in any paper in Britain was on The Sun’s Page 3. At its peak, the No More Page 3 campaign was reportedly backed by 138 British MPs as well as “the Girl Guides, the Girls’ Brigade, most of the teaching trades unions, the College of Midwives, the Scottish parliament and the Welsh Assembly”. This is in addition to the dozens of universities who refused to stock the paper until the feature was ended.

Unlike unsuccessful campaigns against Page 3, which generally sought to introduce legislation to stop it, “No More Page 3” took a different tact of just requesting the paper voluntarily shelve the feature. The problem with the former approach had been that while many MPs didn’t like the feature, most were staunchly against legally banning it due to the censorship precedent this would set. As then Prime Minister David Cameron noted, “…on this one I think it is probably better to leave it to the consumer…”  Deputy Prime Minister Nick Clegg concurred, stating, “If you don’t like it, don’t buy it … you don’t want to have a moral policeman or woman in Whitehall telling people what they can and cannot see…”

Thanks to the No More Page 3 campaign and some surveys it spurred which indicated that although 48% of men had no problem with the feature, a whopping 80% of women did, the paper began taking steps to partially phase it out. The change started with The Sun’s Irish edition, which stopped publishing pictures of topless women in 2013, replacing them with more conservative, “tasteful” images of scantily clad women… In 2015, the British edition followed suit, opting to relegate these topless photos to the web edition of the paper.

However, some still feel the editors at The Sun are missing the point of the “No More Page 3” campaign completely. The general complaint now put forth is that the problem was never the fact that they were showing women’s nipples, but that the picture existed in a “news”paper for no newsworthy reason at all. As journalist Lucy Johnston of The Independent noted,

The space will still feature a picture of a woman; the only difference is that now she will be allowed to wear a bra, which sends the slightly strange message that it was the model’s nipples that were the problem.

Thus, the saga continues. And not only for this, but also because while today the newspaper that was once widely praised for “liberating the nipple” and somewhat less widely for “taking the rudeness out of nudeness” has ended the topless “tradition” they started nearly a half a century ago, many other British tabloids still maintain it.