The Curious Case of the American Accent 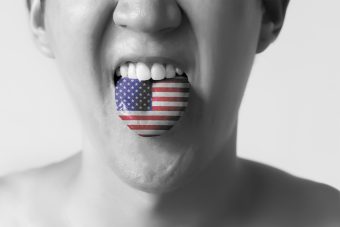 An accent is “a manner of pronunciation peculiar to a particular individual, location, or nation.” That’s not to be confused with a dialect, which is a specific form of a language that has its own unique lexicon (words), grammatical structures, and phonology (a fancy word for accent). So an accent can be a part of a dialect, but not vice versa. Because dialects can be traced to geographic regions, they give linguists important clues to the origins of accents. And discovering where accents came from can explain why an American says “ta-may-toe” and a Brit says “ta-mah-toe,” or why a Bostonian says “pahk the cah” and a Nebraskan says “park the car.”

The United States began as colonies of Great Britain, but the settlers didn’t trickle across the Atlantic at random. According to Brandeis University Professor David Hackett Fischer in his book Albion’s Seed, there are four primary American accents, which derive from the major migrations from England to the New World in the 17th and 18th centuries.

1. East Anglia to Massachusetts (1620–40). Puritans who fled to the New World to escape religious persecution were, by and large, from the eastern counties of England. To this day, in remote parts of East Anglia, there are rural folk who speak in what is sometimes referred to as the “Norfolk whine.” When they came to New England, that accent came along with them. You may recall the TV commercials where an old fellow says, “Pepperidge Fahm remembahs…” That’s the Norfolk whine.

2. South and West of England to Virginia (1642–75). Immigrants who settled in the colony of Virginia tended to be wealthy Cavaliers (that is, loyal to the King) who came to the New World to become planters. Many elements of their accent can still be heard in rural Virginia, such as their penchant for elongated vowels—stretching you into “yeew,” and shortened consonants—”ax” for ask, and “dis” and “dat” for this and that.

3. North Midlands to Pennsylvania and Delaware (1675–1725). In another flight to escape religious persecution, Quakers, largely from the northern and middle parts of England, also settled in the New World. Their speech patterns, characterized by shorter vowel sounds—a short “a” for dance, not the Yankee and East Anglian “dahnce,” or the South England and Virginia “day-ence”—formed the basis for the flat Midwestern American accent we hear today, which has since been adopted as the standard American “non-regional” accent spoken by most newscasters.

4. Borderlands to the Backcountry (1715–75). The so-called “Scotch-Irish” fled their poverty-stricken homeland of northern England and southern Scotland, first to northern Ireland and then to America’s mid-Atlantic coast. These new arrivals were considered uncultured and unruly and didn’t mix well with the established settlers, so most kept going to settle in the backcountry of the Appalachian Mountains. Their distinctive accent can still be heard in many southern regions: “far” for fire, and “winder” for window. The Borderlands accent gave rise to the twangy “country” accent heard in poorer parts of the South—as opposed to the south-of-England “Southern gentleman” drawl heard in more affluent regions. Think Yosemite Sam for the former and Foghorn Leghorn for the latter.

After achieving independence, the United States expanded westward and fresh waves of immigrants arrived in New York, New Orleans, and other port cities. The Northeast kept closer ties with Britain, which explains why Bostonians caught onto the English trend of broadening the “a” in bath, while the flatter pronunciation was used in most of the rest of the country.

Just as it was with the English, immigrants from other countries tended to stick together when they got to America. Here’s a look at where they came from, where they ended up, and how the way they spoke then still affects the way people in the United States speak today.

BARN IN THE USA

Not all accents were brought over from other countries. For instance:

U.S. regional accents are in danger of being lost. Because of TV, movies, video games, and YouTube, kids learn less about speaking from their parents and their grandparents than they do from the likes of the Disney Channel, Nickelodeon, and Pixar. These entities tend to make the main characters speak with standard Midwestern American accents. Result: A young boy in Boston might pretend to “park the car,” and a teenage girl in Georgia might roll her eyes when her mother says “y’all.” If this trend continues, then perhaps some day there will be just one American accent.