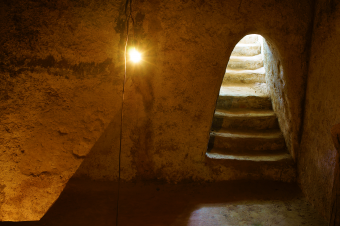 Hidden just below the landscape of modern Vietnam, localised mostly in the Cu Chi District of Ho Chi Minh, exists an expansive series of tunnels that at their peak spider-webbed from what was then known as Saigon to the country’s border near Cambodia. During the Vietnam War, these multi-leveled tunnels were utilised so effectively by Viet Cong forces that American troops had to resort to levelling the area of Cu Chi with artillery… which did little more than annoy the many thousands of troops and civilians hidden safely underground.

Initially built by hand in the late 1940s by communist forces wanting to repel French colonists during Vietnam’s war for independence, at first the tunnels began as simple hiding places for guerrilla forces. But thanks to their tactical advantage, workers soon focused on aggressively expanding the tunnels until the end of the conflict with the French. 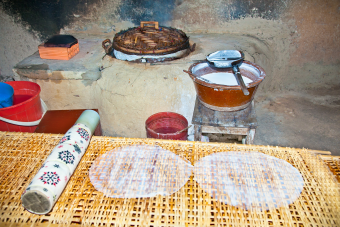 The tunnels remained dormant until the start of the Vietnam War when guerrilla forces found and began expanding them once again, creating a sprawling network comprised of hundreds of kilometres of multi-storied tunnels that went as much as 40 feet (12 metres) underground. The majority of these were located below the district of Cu Chi, hence the name, “Cu Chi Tunnels”.

At the height of the Vietnam War, this underground stronghold contained everything from kitchens to theatres where they showed, according to the BBC, “politically-motivating plays”. In addition to this, they contained bomb shelters, hospitals and ammunition stores, allowing Viet Cong forces to move supplies about the jungles of Vietnam virtually unchallenged.

As for how to access the tunnels and how they handled ventilation, countless hidden trapdoors were placed across the jungle, allowing the Viet Cong to melt into the undergrowth and launch surprise attacks against unsuspecting soldiers- even inside of American bases. 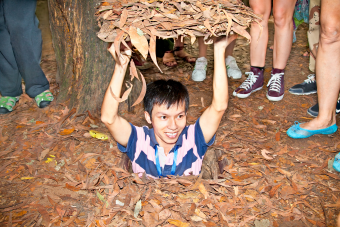 To help prevent enemy soldiers who did stumble upon what looked like entrances to the tunnels, they also built dummy entrances that were booby trapped in various ways, including with explosives, while the actual entrances were disguised as things like termite mounds and bushes.

In the rare event an enemy soldier found an entrance that wasn’t booby trapped, few dared to venture into them for a number of reasons. The first and most pertinent was that many western soldiers were simply too big to fit inside of the entrances which were deliberately made as small as possible.

In the event a soldier could fit, the tunnels were pitch black, often purposefully built very short and narrow and filled with critters like scorpions and venomous centipedes and snakes. Beyond the charming local wildlife, a soldier could expect to find countless hidden booby traps with things like punji pits (sharpened bamboo sticks hidden in pits), explosives, venomous snake filled containers designed to drop from overhead, and poison gas. That’s not to mention the very real possibility of encountering enemy soldiers or simply getting lost in the tunnels.

As a result of all this, in the early days of the Vietnam War, the extent of the tunnels was largely unknown and underappreciated. 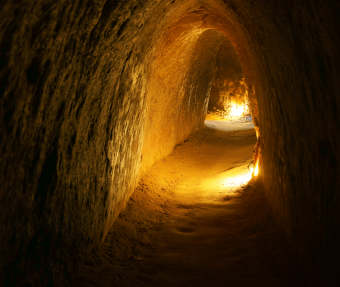 This isn’t to say that enemy forces weren’t aware of them- in fact it was quite the opposite and they launched two massive campaigns to destroy them. The most famous of these was a joint operation between the US and Australia called Operation Crimp. One aim of the campaign was to flush out the Viet Cong forces hiding below ground and shut down or “crimp” off the entrances to the tunnels. Beginning in January of 1966, the campaign began with a massive bombing of the Cu Chi area, turning what was once a lush jungle into a burning wasteland. This did little to disturb the (literally) deeply entrenched Viet Cong, though being forced to remain for lengthy periods in the critter filled tunnels made life very difficult.

After the bombings, ground forces began searching for the tunnels. In the case of American troops, whenever a tunnel entrance was found, the modus operendi was to seal it with a grenade, then continue searching for other entrances- nobody wanted to go in the tunnels.

Except the Aussies, that is.

A group of Australian troops decided to carefully search the underground infrastructure to see just what they contained. Led by one Captain Sandy MacGregor, they began to exhaustively map out the tunnels finding ammunition, medical supplies and dozens of hidden Viet Cong soldiers. Their efforts revealed for the first time the truly massive scope of the tunnel network. 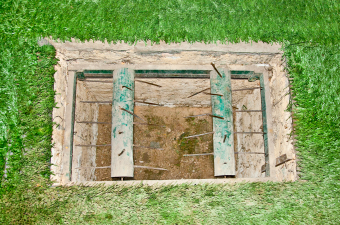 It was around this time that several other specialised teams of soldiers were created to map and destroy the tunnels. The most famous of these are arguably the “Tunnel Rats”- a volunteer force comprised mostly of American, Australian and New Zealand soldiers.

Given that some parts of the tunnels were barely large enough to crawl through, the Tunnel Rats were generally particularly small individuals who by necessity of space went in armed with only a standard issue .45 pistol, a flashlight and a knife. Needless to say, the Tunnel Rats proceeded extremely slowly in the pitch black, crawling along searching for traps at every turn, while attempting to keep their presence a secret.

While these soldiers did their job well, the tunnel system was simply too massive to make even this approach particularly effective, and the Viet Cong fought tooth and nail to defend their critical underground network when they did find enemy troops inside. 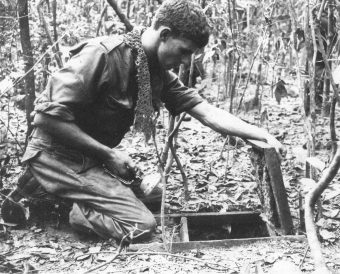 In the end, these tunnels are largely considered to be one of the reasons the conflict in Vietnam lasted as long as it did and their sheer size and reach allowed the Viet Cong to essentially dictate when and where many pitched battles took place in the so-called Iron Triangle. The Viet Cong continued to use the tunnels right up until the end of the Vietnam Conflict in 1975, never mind the years of near constant carpet bombing.

Despite all efforts to destroy the tunnels, well over a hundred kilometres still exist below Cu Chi alone, where certain safer sections have, in parts, been made much larger to serve as both a popular tourist attraction and a cultural monument.