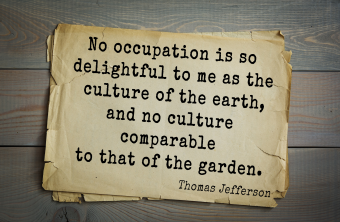 We know him as the man who penned the Declaration of Independence, President of the United States and advocate for the separation of church and state. But Thomas Jefferson’s impact on America goes far beyond simple politics. He was an inventor, a philosopher, a bookaphile and an architect. He was also a food connoisseur. Drawing from his time as French minister and his love of gardening, he helped significantly expand Americans’ palate. Here’s how the United States’ third president became the county’s “First Foodie.”

Jefferson learned how to oversee a farm at a young age. He was born on a 1,200-acre plantation and homestead that his father, Peter Jefferson, owned called “Shadwell,” which was named after the London parish where his wife (and Thomas’s mother) was born. In 1757, when Thomas was only 12, Peter Jefferson died. He left the land to his sons, of which Thomas inherited about half.

It was on this land that he learned how to run a colonial Virginian farm. This meant managing finances, dealing with crops and lording over slaves. Jefferson’s relationship with slavery is well-known to be complicated, but he oversaw many slaves at Shadwell. While the main cash crop was tobacco, Jefferson knew about the toll that tobacco took on the soil and slowly transitioned to wheat and other grains. While running a farm, he also went to school at the College of William & Mary, where he studied law. The inheritance left by his father allowed Jefferson to become one of the more highly educated young men in the state.

A year after passing the Virginia bar, Jefferson began building his mansion. In 1768, construction began on a favorite childhood spot of his, a hilltop he called “Monticello” (Italian meaning “little mountain”). The mansion was completed four years later and he moved in with his new wife Martha Wayles Skelton Jefferson. Wayles’ family was also well-off, so when her father died, it was Jefferson who inherited his property (as was the custom at the time). This included a substantial amount of debt – and over 100 slaves. Notable to the topic of this article, one of those slaves was James Hemings, who was Sally Hemings’ brother (a slave whose six children have been speculated to have been sired by Jefferson). James Hemings was also Martha Wayles’ half-brother, and soon Jefferson’s personal chef.

In 1782, Wayles died from ongoing illness due to childbirth. Jefferson never married again. He also arranged to leave town. Well, more than that, he left the continent, asking Congress to send him to France to replace Ben Franklin as the American Minister there. Spending five years in Paris, it undoubtedly turned this well-educated American into one obsessed with European culture and food. If the seeds were sowed for Jefferson’s legacy as a foodie as a farm kid, it was in France when these seeds were watered.

Jefferson spent five years in Paris, learning about its architecture, culture and food. When he set sail in 1784, he brought along a convoy, including 19-year-old James Hemings. He had a particular reason for bringing Hemings – he wanted him to train as a French chef. Learning under the tutelage of caterers, pastry chefs and even a master chef from the hotel Prince de Conde, Hemings excelled at this craft.

When Jefferson and his clan returned to America in 1789, Hemings went to work cooking and was soon regarded as one of the top chefs in all of America. When dignitaries were invited to Monticello by Jefferson for dinner, they knew they were in for a treat. A Hemings-prepared meal at Jefferson’s home was unlike anything else available in America at the time. (More on the sad fate of James Hemings in the Bonus Fact below.)

There are a lot of myths and legends about which foods Jefferson brought back from France and introduced to the hungry American public.  For example, french fries- while it’s up in the air how French these fried potatoes actually are (see: The History of French Fries), it is correct to say that Jefferson discovered this treat from Parisian street vendors and had Hemings make a similar recipe at Monticello.

On the other hand, contrary to popular myth, Jefferson didn’t invent ice cream (see: The History of Ice Cream), but rather helped popularize it in America by serving it often at functions. His ice cream recipe is also the first known documented recipe for the treat written down by an American. 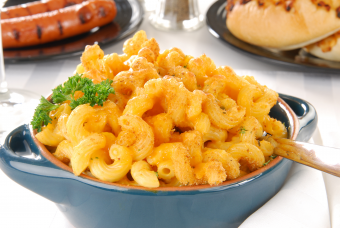 As President, he imported a macaroni maker from Naples to make his new favorite food – macaroni and cheese. Serving it to White House guests at an 1802 state dinner, he helped popularize the food item that is now a staple of most households in the United States. The macaroni maker wasn’t the only kitchen tool and accessory he imported from Europe.  He also brought home a coffee urn, a waffle iron, ice cream mold and a bowl for cooling wine glasses.

However, not everyone enjoyed Jefferson’s French leanings. Fellow Virginian and patriot Patrick Henry attacked Jefferson for essentially being a traitor to his culture for rejecting “his native victuals in favor of French cuisine.”

While Jefferson did have a thing for French cuisine, he also grew a vast variety of his own foods at Monticello. Very into what we would today call “locally-sourced” and “organic” food (okay, probably everything back then was considered organic by modern-day standards), Jefferson grew 330 different vegetable varieties and more than 170 different kinds of fruits on the vast acreage of his Virginia home.

He took immense pride in his distinctly Virginia gardens, saying that his kitchen was  “half French, half Virginian.” At a time when Virginia – and really all of the American South – was known for tobacco, Jefferson pushed crop diversity which is the lasting legacy of his gardening career.

He was also meticulous in keeping track of growth and harvesting schedules, leaving extensive calendars and notes behind. According to culinary historian Karen Hess, his calendar and gardening book are among the most important documents in American food history. Recently, Jefferson’s gardens have been restored at Monticello and are now growing many of the same items that he did 200 years ago.

However, like today’s “locally-sourced” and “organic” food culture, his food obsessions didn’t come cheaply for Jefferson. In 1801 – during his first year of his Presidency – it is estimated that Jefferson spent approximately $6,500 on groceries and maintaining his garden, which is about $125,000 today. He spent another $3,000 (approximately $58,000) on wine. Then, as now, being a foodie wasn’t cheap.

In 1793, Jefferson was residing in Pennsylvania, which did not allow slavery. Thus Jefferson had to pay Hemings for his culinary services while there. It was at this time that Jefferson decided to resign from his cabinet position and return home to Virginia, a slave state. Not keen on going back, Hemings pressed Jefferson for his freedom. Surprisingly, Jefferson granted it – something he only did for two out of the over 600 slaves he owned in his lifetime.

However, this freedom was on one condition- Hemings had to train someone to take his place before he’d be allowed his “unalienable Rights.” The specific agreement that was drawn up by Jefferson before the return to Virginia was as follows,

Having been at great expence in having James Hemings taught the art of cookery, desiring to befriend him, and to require from him as little in return as possible, I hereby do promise & declare, that if the said James should go with me to Monticello in the course of the ensuing winter, when I go to reside there myself, and shall there continue until he shall have taught such person as I shall place under him for that purpose to be a good cook, this previous condition being performed, he shall thereupon be made free…

After spending two years training his brother, Peter, as Jefferson’s new chef, Hemings was granted his freedom and traveled abroad for a time. He eventually returned to the United States where his life took a turn for the worse. Facing extreme racism and having difficulty finding work, despite his enormous culinary talents, and after refusing a position at the White House with Jefferson in 1801 for unclear reasons, Hemings committed suicide that same year.  A friend of Jefferson, William Evans, investigated the death and reported back,

The report respecting James Hemings having committed an act of suicide is true. I made every inquiry at the time this melancholy circumstance took place. The result of which was, that he had been delirious for some days prior to committing the act, and it was the general opinion that drinking too freely was the cause.