What Does the Dangly Thing in the Back of Your Throat Do?

August 2, 2016 Melissa
Ryan D. asks: Does the dangly thing in the back of my throat serve any purpose? 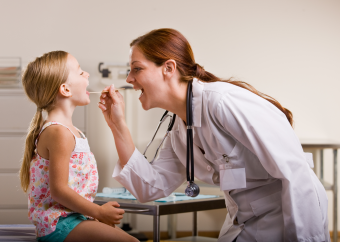 Hanging from the back edge of your soft palate, the palatine uvula seems to serve several functions, none of which are particularly necessary for most people, which is why it can generally be removed with few, if any, noticeable side effects.

In fact, in the West, the “uvula” (name deriving from the Latin “uvola,” meaning “small bunch of grapes”) is often cut out as part of uvulopalatopharyngoplasty to help patients who suffer from sleep apnea. Other cultures have long removed the uvula, sometimes as part of a ritual, to treat all manner of “throat conditions,” as well as cure everything from vomiting and diarrhea to rejecting breast feeding, growth retardation and even anorexia. Today the surgery is still occasionally practiced among various ethnic groups in Eritrea, Ethiopia, Kenya, Niger, Nigeria, Sierra Leone and Zarma.

So if you probably wouldn’t notice anything particularly different when it’s removed, what does the uvula actually do and why do we still have one?

Beyond that it is necessary for producing important sounds, sometimes called uvular consonants, in several languages, including French and Arabic, perhaps the most noticeable role of the uvula is helping to keep the throat moist. You see, the uvula is packed with serous and seromucous glands.  When muscle fibers in the uvula (musculus uvulae) contract, it results in these glands excreting significant amounts of a thin form of saliva that gets splattered and dripped around the throat as we speak and swallow.  In fact, one of the potential side effects of having your uvula removed is occasional problems with a dry throat.

With the help of its internal muscular fibers, the uvula also aids the soft palate in sealing off the passageway between your throat and your nose (called the nasopharynx) when you swallow and speak, helping to make sure bits of food or liquid don’t go up your nose and that the air and vocal vibrations are directed out of your mouth and not your nasal cavity.

The partial role the uvula has in this has led some to speculate that it assists with keeping the tone of our voices in a pleasing range, as it could help control both resonance and subdue the nasal tone of the voice. However, the soft palate alone is usually perfectly capable of sealing the nasopharynx, and thus, in most cases the uvula is not necessary to put an end to a nasally sounding voice. In rare cases, some individuals do have a problem with this, a condition called velopharyngeal insufficiency, which, beyond potential issues like nasal regurgitation (bits of food and the like going up your nose when swallowing), results in the individual having difficulty saying consonants like “b”.

Given these primary functions of the uvula, it has been proposed that the reason humans have a uvula is because it aids somewhat in speech, making it an accessory speech organ. This theory is loosely supported by the fact that, outside of humans, only a few animals, and this is individual animals, not species, have been found to even have one:

In 1992, researchers searched the mouth cavities in a number of animals . . . [including] dogs and horses and cows and apes and sheep . . . . Of all animals in the study, a small underdeveloped uvula was found only in two baboons.

Another function of the uvula relates to its role in the gag reflex, as it is one of only five parts of the body that will potentially trigger it (the others being the roof of the mouth, the backs of the tongue and throat, and the tonsils). Having something the dangles down over the throat opening that can trigger this is obviously beneficial over just the tissue around said opening performing this function. However, as with the other stuff the uvula does for you, it isn’t really necessary in this case either and, for most people, its removal would not likely inconvenience them in the slightest, or even necessarily be noticed at all other than potentially visually.