The Story of Pasteurization and How It Changed the World 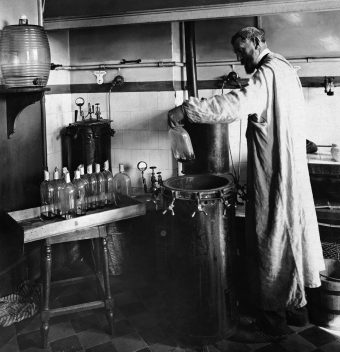 In the mid-19th century, French scientist Louis Pasteur made a discovery that has reverberated through the ages. Perhaps working at the behest of Emperor Napoleon to figure out why wine and beer sometimes soured during fermentation, he found out that this was due to unwanted microorganisms, or “germs,” converting the alcohol into acetic acid. This produced the sour or vinegary taste that we associate with “bad” beer and wine. So, never wanting to leave anyone with a bad drink, he performed a series of tests, including the gradual heating and rapid cooling of the liquids until the offending germs were neutralized. This process eventually was named after its inventor, pasteurization.

Today nearly every liquid sold in stores are pasteurized to prevent the growth of bacteria and the potential for illness due to these unwanted microorganisms. Due to its organic and nutrient rich nature, milk is one of the most susceptible liquids to this and only pasteurized milk is considered safe by the FDA, much to the chagrin of raw milk enthusiasts. However, there is good reason for concern here. Even with modern best practices, it’s impossible to produce sterile milk and from flora of the teat canal or udder to fecal soiling to water used to clean the milking equipment, various microbes will find their way into the milk, not all of them harmless. For centuries, milk borne illnesses, from tuberculosis to salmonella, typhoid fever, diphtheria, and many others, killed millions of people every year. Even as recently as the early 20th century, cow milk was responsible for approximately one quarter of all food borne illnesses. In contrast, today, only about 3 people die from milk-related sickness per year in the United States, thanks in large part to pasteurization. Here now is the history and science behind why milk pasteurization works and why this process continues to save millions of lives every year 154 years after it was first officially discovered.

Humans have been consuming animal milk products since at least 7,500 years ago, despite not widely developing the gene mutation to properly digest milk outside of childhood until around a thousand years later. The gene that facilitates the production of lactase in the human body, necessary for processing the lactose in milk- see What Causes Lactose Intolerance, typically gets switched off in adolescence. Thanks to the rise of dairy as a significant nutrition source, initially largely in cheese and yogurt-type substances that could be widely consumed due to low lactose content and had better shelf life, those who had a genetic quirk allowing them to produce lactase into adulthood flourished, and this mutation quickly spread throughout a relatively large percentage of the human population over the centuries. By 4,000 BCE (six thousand years ago), a dairy economy existed in central Europe, Asia and ancient Egypt, and with it came disease.

Sicknesses resulting from tainted food have a long history of being an equal opportunity killer. There’s speculation that Alexander the Great died of Salmonella resulting from tainted water, food or, possibly, milk. King Henry I of England may have died from eating bad eels. Scholars think that the first Jamestown settlement may have withered away thanks to a Salmonella outbreak. “Milk Sickness,” resulting from drinking the milk of a cow that has eaten the plant White Snakeroot, killed Abraham Lincoln’s mother. President Zachary Taylor could have died from drinking iced milk. Point being, food-related illness was a rather common occurrence prior to Pasteur’s innovation, especially milk specific ones.

So how did Pasteur come up with his momentous innovation? In 1854, Pasteur joined the University of Lille as professor and dean of the science faculty. It was here that Pasteur first took up the problem of alcoholic drinks turning sour. In 1856, after being commissioned by the father of one of his students, M. Bigot, to discover what was ruining a certain beet root alcohol, Pasteur examined samples under the microscope and discovered not only spherical yeasts, but also a rod-shaped microorganism, Acetobacter aceti, which it turns out converts alcohol to acetic acid.

In 1857, Pasteur returned to the École Normale as director of scientific studies and continued his research on the problem. Notably, on April 20, 1862, he completed his first test of boiling and then cooling wine to kill the souring bacteria. At about this time, Emperor Napoleon III commissioned Pasteur to save the entire French wine industry, which had become overrun by “diseases” that caused the wine to be sour or bitter. In about 1863, Pasteur inspected a variety of wineries and came to the conclusion that “there may not be a single winery in France, whether rich or poor, where some portions of the wine have not suffered greater or lesser alteration.”

Continuing his research into heating the liquid, Pasteur, who patented his heating and cooling process in 1865, discovered that the wine could be saved from souring and the original flavor preserved by heating it to a mere 50-60 degrees Celsius or 122-140 degrees Fahrenheit. Quickly adopted by the wine industry, the general pasteurization process was not widely applied to milk until man years later, to the doom of many.

It should be noted, however, that like nearly every innovation, Louis Pasteur did not discover this process in a vacuum. As with almost every apparent giant leap forward, closer examination almost always reveals centuries of gradual progress and forward steps towards this revelation. For instance, some historians believe that a process similar to pasteurization may have existed as far back as 11th century China. In an attempt to preserve wine, the Chinese would fill hot clay jars with fresh wine, cover with leaves, seal with mud and, then, bury in the cool soil. The first documented process of pasteurization (even though it wasn’t called that at the time) was in 16th century Japan in regards to soy sauce. In order to ship it to Europe without it spoiling before it got there, the Japanese devised a process of boiling it in a iron pot, funneling it into bottles and immediately sealing them.

Even immediately prior to Pasture, there were a number of European scientists who helped pave the path to discovery. A Italian priest and scientist named Lazzaro Spallanzani realized that “a significant degree of heat” could be used to kill microbes, then reappearance could be prevented by “hermetically sealing” the jar (as opposed to cork, “which is very porous”).

Parisian chef Nicolas Appert won a cash prize from the French military for his work in providing safe, boiled, hermetically-sealed jars of preserved food to the army. (See: The Can Opener Wasn’t Invented Until 48 Years After the Invention of the Can) Using the money, he opened the world’s first food bottling factory in 1812, where he canned and boiled all types of food (including milk). His method consisted of boiling the glass bottle in much hotter water and for much longer time that Pasture would later deem necessary. Due to this, the preserved food would often have its taste altered and the glass bottles sometimes broke. A few years later, Englishman Peter Durand devised a iron can with a thin layer of tin around the exterior that could withstand the boiling process better. While Spallanzani, Appert and Durand all understand this worked, they didn’t really understand the nuts and bolts of why. In 1862, Louis Pasteur answered this question.

While the science behind pasteurization may have been relatively unknown in the mid-19th century, a basic understanding of biology helps explain it. Bacteria are single-celled organisms with a cell envelope, the cytoplasm (stuff inside of the cell like ribosomes, chromosomes, enzymes, etc.) and the flagella (the part that allows the cells to attach to other things). When the temperature gets hot enough, the enzymes inside of the cytoplasm chemically change shape and are no longer able to work properly. This essentially makes the entire cell unable to function. Heat can also destroy the cell envelope, which further damages the cells.

Once the offending cells are dead, it is just as important to make sure nothing can enter back in. That’s why jars, cans and anything pasteurized needs to be hermetically sealed or refrigerated (which doesn’t kill cells, but slows their growth) immediately after being heated for maximal shelf life.

As with other product, the pasteurization process in milk is specifically tweaked to kill most offending bacteria in the liquid, though to preserve flavor, the milk is typically not heated high enough to kill all microbes and occasionally post-pasteurization contamination also occurs. Since the milk is not hermetically sealed, these microbes still happily feed on things in the milk and multiply. Refrigerating it simply slows this process down, but doesn’t prevent it. When milk goes bad (turns sour), it means that enough bacteria has grown in it to ferment a certain amount of the lactose, which cause the sour smell. While slightly spoiled milk won’t taste good and could make one sick, the smell usually comes prior to the milk being really harmful and, potentially, deadly. In other words, the smell is a precursor warning sign.

In the century and a half since Pasteur made his discovery, pasteurization of milk and many other liquids and foods has saved many millions of lives, altering human history since in unknown ways. Who knows- given the large number of lives saved in the interim, if not for this process, one of your direct ancestors may not have existed, and hence, neither would you.