Why are Breasts Called “Boobs”? 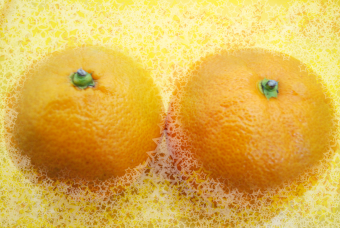 There’s an oft repeated and decidedly untrue claim that Eskimos have hundreds of words for “snow”. (Beyond the fact that there is no single “Eskimo language”, when talking about the wider Eskimo-Aleut language family, these actually have roughly the same number of root-words for snow as English.) The false claim that they have drastically more is sometimes used to demonstrate how limited the English language is when it comes to coming up with words for things, which is a little unfair considering how many synonyms currently exist for “breasts”. Of the numerous slang terms we have to describe lady-lumps, none is as non-controversial or ubiquitous as the word “boobs”. So where did the word “boobs” come from?

There’s an old joke that posits that the word “Boob” came about because it serves as a visual representation of what a pair of breasts look like from three key viewing angles, above (B), the front (oo) and the side (b) respectively. Unsurprisingly, this is just a happy accident, rather than a serious origin story.

As we’ve previously mentioned in our article on why certain traps are called “booby traps”, according to the Oxford English Dictionary the earliest written example of the word “boob” being used to specifically describe breasts comes from the 1934 novel, Tropic of Cancer: “She was lying on the divan with her boobies in her hands.”

The author of that masterpiece, Henry Miller, is also often credited for the first recorded use of the slight modification, “boobs”. This occurred in another product of his literary genius, published in 1949, called Sexus in which he states,

However, upon a much more comprehensive review than just consulting the normally impeccably accurate Oxford English Dictionary, we found an earlier example of the word “boob” used in this way in the lesser known 1932 novel Young Lonigan, by James T. Farrell. In that work, you will find the line:

Studs didn’t usually pay attention to how girls looked, except to notice the shape of their legs, because if they had good legs they were supposed to be good for you-know, and if they didn’t they weren’t; and to notice their boobs, if they were big enough to bounce.

Now, you are probably aware that the word “boob” can also be used to describe a “stupid”, “foolish”, or otherwise “clumsy” person. This particular definition is generally thought to have derived from the Spanish word “bobo” which roughly means “dunce”. This Spanish word, in turn, comes from the Latin “balbus” meaning “stammering”. There is also a less accepted theory that “boob”, meaning “stupid”, has Gaelic origins. 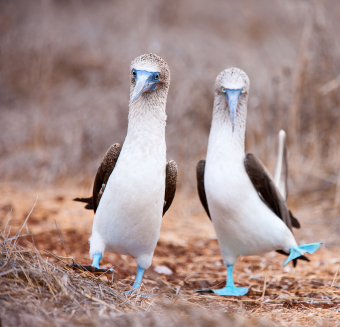 Whatever the case, the word “booby,” in English, first popped up in the sense of “fool” or “dummy” around the late sixteenth century and within decades was applied to birds of the Sula genus. These birds have very large feet that make them look clumsy and foolish when they walk or run, instead of fly. In addition, they would often land on ships and are supposedly exceptionally easy to catch, making them popular fare for sailors, who began calling the birds “boobies” for their perceived stupidity. Since then, this term has been applied to all manner of things such as the “boob-tube” (idiot box), “booby trap” (trap for dummies), and “booby prize” (prize for the biggest loser).

You might be tempted to think from this that the definition of “stupid” gave rise to “boob” being used to describe breasts, perhaps because of the way they can sometimes make men do stupid things or because of something akin to the false stereotype of a “dumb blonde”. In fact, this line of thinking is generally cited by those few who are offended by the use of the term “boob” as being the reason the term is offensive to them- that “boobs” derives from a word that means “stupid” and hence it’s kind of like calling women stupid.

However, etymologists don’t generally think this is the case; the evidence seems to indicate that “boobs”, meaning “breasts”, has an entirely separate and decidedly more innocent etymology, likely via the word “bubby”, meaning “breast”. As to where “bubby” came from, the two leading theories here are either via the German “bübbi”, meaning “teat” (not well supported via documented evidence), or simply via baby talk.

As we’ve discussed at length before, (for full and quite fascinating details see: Why Do We Call Parents Mom and Dad?), the first words children inevitably vocalise will often use consonants like P, B, D, and M in a repetitive fashion, creating formerly nonsensical words like “papa”, “dada”, “mama”, and, most relevant to the topic at hand, “buh-buh”. Thus, if “bubby” didn’t just derive from the German for “teat”, it’s generally thought it came from these vocalisations.

It has also been widely speculated that perhaps “bubby” was only partially from baby vocalisations, and in fact was just a child-speak variation of the Latin for “little girl”, “pūpa”, the feminine gender of “pūpus” (little boy), which itself may be a word that has its origins in baby-talk. However, we couldn’t find any documented connection between “pūpa” and “boob” other than a whole lot of sources claiming this without providing even the smallest amount of evidence to support the claim. So until such evidence presents itself, we’re going to remain skeptical on this one.

In any event, the first reference to “bubby” or the plural “bubbies” being used to describe breast appeared in a 1686 poem in New Poems by Thomas D’urfey:

The Ladies here may without Scandal shew / Face or white Bubbies, to each ogling Beau.

The next known instance appeared in one of John Arbuthnot’s John Bull pamphlets written in 1712, where it states:

One of the things, that first alarmed me, was, that they showed a spite against my poor old mother *. “Lord,” quoth I, “what makes you so jealous of a poor, old, innocent gentlewoman, that minds only her prayers, and her Practice of Piety: she never meddles in any of your concerns?” “Foh,” say they, “to see a handsome, brisk, genteel, young fellow, so much governered by a doating old woman! Why don’t you go and suck the bubby?

Thirteen years later in Richard Bradley’s Family Dictionary (vol. ii), it gives a method for helping women express milk, “But if on the contrary a Woman has no occasion for Milk, there are more Ways than one to make her lose it. First, Let her put Chervil upon her Bubbies and under her Arm-pits…”

While the OED states that this term soon became obsolete, in fact, there are numerous instances of it being used since then, even up to the present day, with it thought that this ultimately gave rise to the word “boobies” and its many variants around the 1920s.

Moving swiftly on, in regards to why “boobs” seems to be the most popular synonym for breasts, it has been speculated that it may have something to do with the fact that, for whatever reason, most people don’t seem to find the word offensive, unlike many other synonyms for breasts that tend to draw a little more ire like “tities”, “chesticles”, “God’s milk jugs”, or “fun bags”. In fact, in 2013, Bonds, an Australian women’s clothing chain did a survey and found that 74% of Australian women typically used the word “boobs” to refer to their own breasts. As such, the company went ahead and decided to use the word in their “Bonds for Boobs” ad campaign, which both advertised their bra product line as well as a partnership they’d made with the National Breast Cancer Foundation.

Nevertheless, as we can very much attest to, someone is wont to get upset about pretty much everything if you’ve got a wide enough audience. Unsurprisingly, a few people did complain to the Advertising Standards Board (ASB) over Bonds’ use of the word “boobs”. In response, the ASB reviewed the ad campaign wording and graphics and concluded that there was nothing in the advertisement that was inappropriate for a broad audience and Bonds was allowed to continue to run the ad. No doubt Bonds was grateful for the complainers drawing media attention to their ad campaign.

Of course, the bigger question in all of this is how I’m going to convincingly explain away my search history the last couple days while researching this article… “I swear, honey, I was researching boobs… FOR SCIENCE!”