July 26, 2016 Karl Smallwood 6 comments
Mark A. asks: Is it true that the reason sharks don’t eat people is because we taste bad to them? 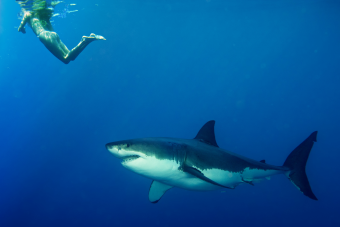 The idea of sharks not liking the taste of humans has been around for at least a half a century, with the first account of this notion (that we could find) appearing in a Sep. 2, 1968 edition of The Evening Independent in an article titled “Expert Says Sharks Dislike Human Taste”. In it, the associate curator of vertebrate paleontology at the Los Angeles County Museum of Natural History, Dr Shelton Applegate, noted that it was his opinion that swimmers generally survived shark attacks because “Most of them [sharks] after they take the first bite, find they don’t like the taste and spit it out.”

(In another article in this same edition of this newspaper, it notes that one Dr John Tracy had recently come up with a revolutionary treatment for any disease that can’t be cured by traditional means- beating it out of the patient, in a process he called “impact therapy”- literally striking the patient repeatedly with a twenty pound sandbag until they feel better…)

But do sharks really not like the taste of humans? First, a couple caveats- there are hundreds of different types of sharks, only a handful of which have ever been known to bite a human. On top of that, accurately determining why a specific shark, or any animal, does something can at times be incredibly difficult and the general view from experts on the subject can change over time, as has happened concerning this very question.

That said, why certain sharks attack humans has been very closely looked at over the last century and, as a result of this accumulation of data, scientists today who study the creatures think they have a fairly good handle on why sharks don’t usually eat people, at least in the general case.

With those caveats out of the way- when talking about the typical sharks people think of when discussing shark attacks (e.g. Great White’s and Tiger sharks), in a sense, yes, sharks do not like the way humans “taste”, but you’ll get a false impression if you stop reading here, because we’re not talking about the flavour of humans per se and sharks also seem to be weighing the risk vs. reward on this one.

You see, sharks are perfectly happy to eat red meat and in a pinch have no qualms about chowing down on you. But they are also seemingly well aware of the fact that the composition of the human body isn’t an ideal food source for them and also aren’t keen on the fact that, when bitten, humans have a tendency to fight back around a very sensitive and vulnerable region of said shark’s body. So why do sharks bite humans in the first place then?

First, to dispel one of many shark myths out there, sharks do not bite humans because they mistake us for pinnipeds (sea lions or seals) or any of their other preferred food sources. We know this because a shark’s behaviour when it is attacking, for instance, a seal, is very different than the typical behavior seen when they bite humans.  As the director of ReefQuest Center for Shark Research, R. Aidan Martin, notes,

I spent five years in South Africa and observed over 1,000 predatory attacks on sea lions by great whites. The sharks would rocket to the surface and pulverize their prey with incredible force.

In contrast, he notes that when sharks bite humans, they generally approach with “leisurely or undramatic behavior.”

Further, sharks are very intelligent and have extremely acute senses, including incredibly sharp vision and sense of smell (Lemon sharks can even detect tuna oil at a concentration of just one part per 25 million), as well as good hearing; they can also detect bioelectrical fields and minute changes in water pressure. Beyond that humans don’t really look like pinnipeds, neither visually nor likely from a bioelectrical standpoint, it is noted that sharks respond very strongly to the smell of things like pinnipeds and fish, but not at all to the general smell of humans. Add it all up, and it is generally thought very unlikely that a shark would mistake a human for a seal as is the common trope, and the evidence of how they approach us lends credence to this notion.

This brings us to the real reason sharks bite humans- curiosity. When sharks encounter an unfamiliar creature that might be a potential food source, they’ll sometimes be inclined to investigate more closely. But as shark biologist Dr Erich Ritter notes, “The unknown is always potentially dangerous and – even for the shark – harbors a certain risk. Approaching or biting the unknown object is thus an exception and not the rule!”

When sharks do feel curious enough to approach and bite, the aforementioned shark expert R. Aidan Martin adds: “When great whites bite something unfamiliar to them, whether a person or a crab pot, they’re looking for tactile evidence about what it is. A great white uses its teeth the way humans use their hands. In a living shark, every tooth has ten to fifteen degrees of flex,” which, beyond taste and the smell of subsequent blood, is another way the sharks can study a creature by biting it.

So when investigating a human, it’s generally the case that the shark will approach cautiously, rather than the way they attack prey they’re familiar with. If you seem like you’re trying to flee from them, they may be inclined to approach more aggressively. Otherwise, if you just sit there or don’t seem like you’re going to attack them as they approach, for instance if you don’t see them coming (which may well be what they’re going for), they might go in for a nibble to get a better sense of your body and if it might be a good food source for them, as well as see what you’ll do in response to the bite. (Unfortunately, even a quick nibble from a large shark can be life threatening, accounting for most of the deaths we humans suffer at the hands of sharks, rather than them purposefully chowing down.)

Back to the idea that sharks don’t like the taste of humans. As mentioned, this idea has been around since at least the mid-20th century, but as experts such as Dr Daniel Bucher of Southern Cross University note, there is really very little evidence that the reason sharks don’t eat humans is because of our taste, in terms of flavour, at least.  To quote him, “Normally [sharks] eat fish, but they don’t mind red meat if they can get it. Seals have very red meat (like humans) from oxygen binding proteins in the blood and sharks eat seals”.

While sharks do have taste buds that tell them a lot about the composition of the thing it’s tasting, distinct “flavour” does not seem to be a major factor that impacts whether a shark will eat something or not. For many types of sharks, the evidence at hand seems to indicate that their taste buds more function as a sort of binary “eat”, which generally is a “yes” as far as the taste buds are concerned if the thing is determined to be made from meat, or “no” if it’s not, explaining why sharks can happily eat carrion and rotting flesh if they’re particularly hungry.

In fact, “the garbage cans of the sea” better known as Tiger sharks go even further and really don’t seem to have much in the way of any sort of taste filter when it comes to eating things. For instance, Tiger sharks have been found with things like suits of armor, fur coats and live hand grenades in their stomachs.

But we said at the beginning of all this that “in a sense” sharks don’t like the taste of humans, so what sense were we referring if they aren’t too particular on the flavour of something?

As alluded to, sharks don’t like the way many humans are built and it often requires a nibble for them to determine this fact. Many of the things sharks normally eat are extremely high in fat; fat contains a little more than twice the calories per gram than muscle. Humans are (often) relatively bony, particularly in the legs and arms. This isn’t ideal for the shark as they have a quite slow digestive system, which is further slowed by the presence of all our many thick bones. Since sharks need a lot of calories to maintain proper body function, spending a few days digesting a human instead of eating something much more calorie dense isn’t ideal.

That said, sans having other high fat food sources available, humans, particularly those of us who decided to eat the entire six pack box of ice cream sandwiches last night (don’t judge me), still make an OK meal for certain types of sharks, and in the extreme case some of us even make an excellent meal, though perhaps not the humans you’d generally find bobbing up and down on a surfboard in the ocean. But given options, and if they’re not too hungry at the time, the sharks that are capable of chowing down on something the size of a human prefer a nice tasty high fat meal like a seal or tuna.

This brings us to the second factor in why sharks don’t seem to like to eat humans; this one having nothing to do with nutrition- they’re afraid.

Despite their fearsome reputation and status as apex predators, sharks don’t generally like eating things that put up a fight. Particularly when talking about creatures the shark isn’t terribly familiar with and that are determined to have sub-optimal nutritional value, when said animals fight back, there is a good chance the shark will be scared away if it’s not too hungry.

From there, it’s interesting to note that where you are in the world actually may affect what the shark does next. Great White sharks in California have been observed to strike potentially dangerous prey and then, if the shark determines said creature is still an OK food source and it managed to wound it before fleeing, it may watch at a safe distance to see if the animal will die from its wounds, making it an easier snack. This same behavior has not been widely observed in many other regions, like South Africa, where if a Great White has decided to actually eat something, it will simply ferociously chow down on its prey, as previously noted.

So to sum up, a human’s (generally) low fat content and the fact that we are an unknown, potentially dangerous, creature that is putting up a fight, including being fully capable of gouging out the shark’s sensitive eyes as we beat on their faces (which is the recommended way to fend off an attacking shark, though if possible using an object, rather than hands and feet), makes sharks hesitant to do more than just investigate us as a potential food source, rather than actually deciding to make us one. We’re simply not worth the risk given the poor reward.