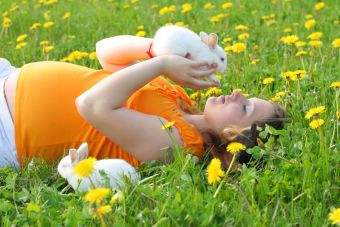 We live in an age where determining if a woman is pregnant is ridiculously simple and cheap. Go back a few decades, though, and the latest and greatest technology for determining whether a woman was with child involved a syringe full of urine and little animals.

Yes, as bizarre as it’s going to sound, you really can use things like rabbits (or a number of other animals) to detect whether a woman is pregnant. To be clear, this isn’t just an old wives’ tale that’s only correct just enough to keep people believing it via confirmation bias or something like that, “The Rabbit Test”, as it is aptly known, is around 98.9% accurate (for reference, modern home pregnancy tests tend to range from 97%-99% in accuracy). Some version of this test has been the de facto way to test whether a woman was pregnant from the time the method was discovered in 1927, right up until the 1970s. The only real improvement made in that time being that, instead of a rabbit, later doctors used a specific species of frog, for reasons we’ll get to in a minute. 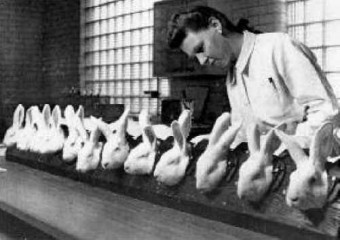 In a nutshell, the rabbit test involved taking the urine of a woman who suspected she was pregnant and injecting it into a juvenile female rabbit. The importance of using a juvenile rabbit was that if the woman was pregnant, the rabbit would prematurely enter heat, which the doctor would be able to determine by checking its ovaries for certain signs, such as being enlarged with visible red dots on the surface. This was a process that for the early days of the procedure unfortunately meant that the rabbit had to be killed, leading to a popular misnomer, and expression, that a woman would only be pregnant if “the rabbit died”; but in reality, the rabbit always died.

In time, the test and science advanced enough for the doctor to be able to check whether the rabbit had an estrous reaction without killing it, much to the relief of cute little fluffy bunnies everywhere. Another significant improvement was the realisation that the experiment could be performed on a frog (specifically an African Clawed Frog) with similar accuracy. This circumvented animal murder entirely, since all the doctor had to do in this case was wait to see if the juvenile frog laid eggs within 24 hours of being injected with the urine.

At this point you might be wondering how this sorcery works.

Much like with modern day pregnancy tests, the answer lies in a hormone called human chorionic gonadotropin, commonly abbreviated to hGC, produced by the placenta. hCG is (normally) only present in the urine of women who are pregnant or sometimes men who have testicular cancer. (And, yes, a home pregnancy test can in some cases be used as a do-it-yourself way to tell if you have testicular cancer, as well as some other forms of cancer. For more on this, see our article: Can a Man Test Positive on a Pregnancy Test?)

Back to the rabbit test. This was invented in the late 1920s by Selmar Aschheim and Bernhard Zondek, a German gynecologist and endocrinologist respectively. Zondek, an expert in hormone research, discovered and isolated the hCG hormone while working alongside Aschheim, studying the urine of pregnant women in 1927. Noting that the hormone was (seemingly) only found in the urine of pregnant women (the fact that the hormone could be produced by testicular tumors, among others, was discovered a few years later), the pair correctly theorised that it was intimately linked with being pregnant, though they were never able to pinpoint where exactly it was produced, incorrectly proposing that it was produced by the anterior pituitary gland, rather than the placenta.

(Side-note: the fact that hCG is produced by the placenta was discovered by one Georgeanna Seegar Jones, a visionary pioneer of in-vitro fertilization whose research is also partially responsible for the existence of the over-the-counter pregnancy tests we have today. See: How Do Home Pregnancy Tests Work?)

After isolating the hormone, the men began experimenting with it to see what effect, if any, it would have on mice and rats. To their amazement, they discovered that it caused female rodents to begin ovulating, even if they hadn’t yet reached sexual maturity. How revolutionary this was cannot be overstated.

Prior to Aschheim and Zondek’s discovery, there was no reliable way for a woman in her first trimester to definitively know whether or not she was pregnant, with one of the leading “tests” through the ages using uroscopy- studying the colour and consistency of a woman’s urine, with the practitioners colloquially called “piss prophets”. Another interesting urine based method was dipping a ribbon in the urine and then burning it to study the smoke and the flame’s colouration.

A notable exception to the various questionable methods of confirming pregnancy throughout history is an ancient Egyptian test dated to at least 1350 BC that involved urinating on a sack of wheat and barley seeds over the course of a week, and then checking to see if they sprouted. (We can only imagine how they came up with this.) If the seeds did sprout, the woman was determined to be pregnant. If not, probably not. While this may seem bizarre and more than a little ridiculous, said test was found to be 70% accurate under laboratory conditions in 1963. It is theorised that the presence of high levels of estrogen in the urine of pregnant women is the trigger here.

By 1928, Aschheim and Zondek had perfected their rabbit test, dubbing it the A-Z test, as a nod to both of their names, and for the first time in all of human history, except for in Ancient Egypt, women who suspected they might be pregnant had a way to relatively quickly find out for sure. 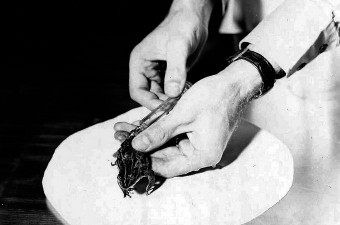 At around the same time the A-Z tests were making their debut, a British zoologist residing in Cape Town, South Africa, Lancelot Hogben, independently discovered that the African clawed frog would begin ovulating and producing eggs when its dorsal lymph sac was injected with certain hormones from sheep. Hogben repeated the test with urine from a pregnant woman and noted that the frogs would similarly ovulate and lay eggs shortly after being injected, making them a reliable indicator for pregnancy. (It was later discovered injecting adolescent male frogs also worked, except in this case it simply spurred sperm production.) The actual methodology of the test was later refined by South African researchers called Hillel Abbe Shapiro and Harry Zwarenstein, with the result being a pregnancy test that was every bit as accurate as the A-Z test.

Though Hogben’s discovery was made at around the same time as Aschheim and Zondek’s in the late 1920s and was both more humane and faster, giving reliable results in less than a day instead of around 72 hours like the A-Z test, the Hogben test didn’t become popular until the mid-1930s, at which point it became the gold standard for detecting pregnancy. While other methods were developed in the ensuing decades, the Hogben test remained one of the most accurate and popular ways to detect pregnancy right up until the early 1970s. 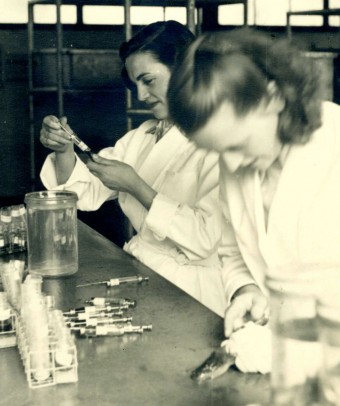 To quote a letter from an anonymous individual written to Shapiro and Zwarenstein:

Thank you for your report on the pregnancy test on Mrs. X. You may be interested to know that of one GP of many years’ standing, one specialist gynaecologist and one frog, only the frog was correct.

We like to imagine that after correctly overruling her more credentialed colleagues, they gave the frog a tiny doctor’s coat.

And if you’re wondering, the first home pregnancy test didn’t hit the shelves until 1978, created by Judith Vaitukaitis and Glenn Braunstein and marketed by e.p.t. for $10 (about $37 today). It was a bit more complicated than the “pee-on stick” versions we have today, consisting of a vial of purified water, a test tube with red blood cells from a sheep, a medicine dropper, a clear plastic support for the test tube, an angled mirror at the bottom, and some duct tape (OK, I made the duct tape part up). Taking around two hours to get results, it was still 97% accurate for positive results and 80% accurate for negative results. The first advertisement for the test came in the April 1978 edition of “Mademoiselle”. Beyond saving a frog from getting jabbed with a needle and injected with your urine, the advantages stated were, “privacy and not having to wait several more weeks for the doctor’s confirmation, which gives you a chance, if pregnant, to start taking care of yourself… or to consider the possibility of early abortion.”