How Did the Pet Rock Fad Start? 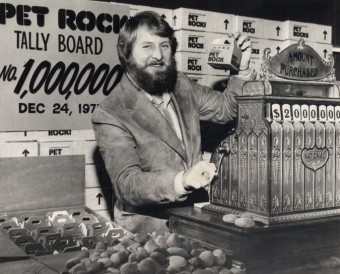 For all you pet owners out there, has there ever been a time when you’ve just had enough? Enough hairballs, enough grooming, enough messes, enough vet bills and the like? After listening to his friends complain about such things with their pets, Gary Dahl decided to take matters into his own hands and provide the world with the planet’s perfect pet: the Pet Rock. That’s right, folks. In 1975, the biggest fad was to dish over a whopping $3.95 ($17.58 today) to purchase one very ordinary rock. It wasn’t cute or cuddly. It wasn’t a beautiful piece of art. The rock didn’t even have a face! It was just, well, a rock.

What would possess someone to pay for a rock that could probably be found in one’s own backyard? 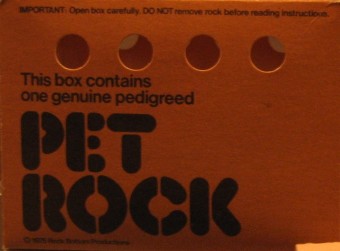 The rock came with its own pet carrier- a custom-made cardboard box with a handle and air holes. (Not that a rock needed to breathe, of course.) Inside the box, the rock had its own bed of wood shavings to nestle in while it waited for someone to take it home. Lastly, the perfect pet wouldn’t have been complete without its very own, official training manual, which was arguably the real product being sold.

The Care and Training of Your Pet Rock manual was filled with puns and jokes about how to take care of your pet rock. For instance, it mentions that while the command “stand” was relatively impossible for your pet rock to accomplish because it had no feet, other commands like “sit” and “stay” were easily learned by the rocks, as were commands such as “roll over,” “down,” “fetch,” and “attack”… at least as long as the rocks had the assistance of their master or a steep hill. Dahl also covered things like house training the rock, stating, “If, when you remove the rock from its box it appears to be excited, place it on some old newspapers. The rock will know what the paper is for and will require no further instruction.”

All in all, the thing being sold was not so much the rock itself, but the entertainment value of the product and its trappings. As Dahl would state in an interview with People magazine in 1975, “You might say we’ve packaged a sense of humor.”

As for which rocks were chosen, Dahl picked smooth stones from Mexico’s Rosarito Beach to serve as the pets.  The rocks cost him one cent each (about four cents today). The wood shavings he used for the bedding were likewise practically free, which meant the printing expenses for the manual and the costs of creating the custom-made boxes were the most expensive items in the kit. However, for the first run, Dahl managed to get around the printing fees for the manual by simply tacking on his Pet Rock training manual to a large printing job he was having done for one of his clients.

Pet rocks rose to fame almost overnight and word quickly spread just in time for the Christmas season. Dahl, by day a freelance copy editor specializing in advertising copy, helped get the word out via submitted his own carefully crafted press releases to news outlets. Shortly thereafter, Newsweek published a half-page story on the Pet Rock and Dahl found himself on The Tonight Show, twice. At the fad’s peak, Dahl was shipping out approximately 10,000 rocks per day, in no small part thanks to various newspapers in America featuring articles about the ridiculousness of this product that was flying off the shelves.

The Pet Rock craze lasted about six months, beginning in September of 1975, with sales peaking during the Christmas season and tanking in February of 1976 when stores discounted prices due to declining sales and copycat products flooding the market.

As to whether Dahl really “made a million dollars” off of the Pet Rock, as is so often stated, this appears to be true. While it isn’t public knowledge what Dahl’s profit margin was for each Pet Rock after costs such as labor, shipping, and giving his investors and retailer’s their cuts was accounted for, he did once state that his initial target was to make sure he’d make a minimum of $1 ($4.45 today) for each rock sold. In 2004, he also told the New York Times that “I put about $5 million of today’s money in my pocket” thanks to the Pet Rock. Once the dust settled and the fad was over, he sold approximately 1.5 million rocks for a gross sales total of about $6 million or about $27 million today. Doing the math, about $5 million in 2004 would mean he profited about $1.5 million in 1975 (about $6.7 million today); so if his 2004 quote is to be believed, he hit his target of about $1 profit per Pet Rock sold and did indeed “make a million dollars” from selling rocks.

So what happened to Dahl after Pet Rocks became a footnote in history? Well, his original investors sued him, claiming they were not given their rightful portion of the profits earned from Pet Rocks sales. When the court agreed, Dahl had an undisclosed six figure payout to fork over. In addition, would-be inventors turned to Dahl for his approval and advice on what they hoped would be the next get-rich-quick invention. To this, Mr. Dahl told The Associated Press in 1988, “There’s a bizarre lunatic fringe who feel I owe them a living. Sometimes I look back and wonder if my life wouldn’t have been simpler if I hadn’t done it.”

As for his later business ventures, among his more zany ones included Sand Breeding Kits. These allowed people to use two vials of sand, one “male” and one “female,” to create their own desert.  This product did remarkably well on its first run, quickly selling the initial 50,000 units he put together. Like the Pet Rock, these sold at just under $4 each, grossing about $850,000 in today’s dollars on the first run. Optimistic about the initial sales, Dahl then created an additional 50,000 kits, only to see the bottom almost instantly fall out. This resulted in tens of thousands of the Sand Breeding Kits going unsold and ultimately causing Dahl’s initially impressive profits on this product to be frittered away.

Another odd-ball failed product line he came up with was Red China Dirt- dirt from China’s mainland packaged in little acrylic cubes priced at $5 each. He marketed the product as a way to move “the entire country [China] from under their noses. What I’m proposing is one of the sneakiest conquests in the history of the world.” Unfortunately for Dahl, just a few weeks after he launched the product, on December 15, 1978 President Jimmy Carter formally recognized the People’s Republic of China as the sole legal government in China (formerly the United States’ position was that the Republic of China on Taiwan was the sole legal government of China). Dahl stated of this diplomatic switch and improved relations between the two nations, “End of joke, end of product.” 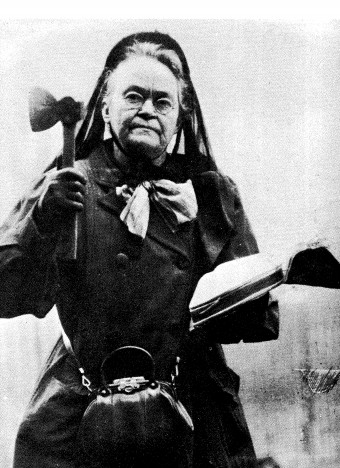 More lucratively, Dahl used some of his earnings from the Pet Rock to open a bar in Los Gatos, California, humorously named Carry Nation’s.  If you’re not familiar with Mrs. Nation, she was an infamous member of the temperance movement who made a name for herself in the early 20th century by going around and running amok (see: What is an Amok?) in the inside of various saloons.  She began by throwing rocks, bricks and other projectiles at these establishments. Finally, she picked up a hatchet and entered one. Her first outright smash-up was in Wichita, Kansas on December 27, 1900, causing several thousand dollars in damages. It also landed her in a jail cell.

This didn’t stop her.

Between 1900 and 1910, she was arrested on at least 30 occasions after she and her followers vandalized one barroom after another, with Carry goading them on by crying, “Smash, ladies, smash!”  One can only imagine the hilarity of the situation.  You’re sitting there pleasantly chatting with your friends over a cold brew, when suddenly a hoard of hatchet wielding women charge into the place and begin smashing everything in sight.

Needless to say, the same sense of humor that Dahl used to create the Pet Rock and its tongue-in-cheek training manual were on full display when he chose the name for the bar, which is still open to this day.

After several years of these sorts of ventures, Dahl returned to what he did best- marketing, founding the company Project 80, which specialized in marketing people’s product ideas, as well as helping them take their product from idea to flying off the shelves of stores. This, essentially, was the same thing Dahl had been doing himself, mostly unsuccessfully, but with much less risk- earning money initially by charging people a fee for his help and expertise, and then later by requiring he be paid royalties on all sales of their product. While the profits per product sold were much lower for himself, it at least ensured that he’d be paid something, whether the product ultimately flopped or not. Using his experience in this arena, he also wrote a book, Advertising for Dummies, in 2001.

Gary Dahl passed away on March 23, 2015, at the age of 78, forever to be remembered for making himself a millionaire by selling one of the most ingeniously ridiculous products of all time.