April 29, 2016 Karl Smallwood One comment
Kateri S. asks: I have always been told you can’t put pineapple in jello because it won’t set. Why? 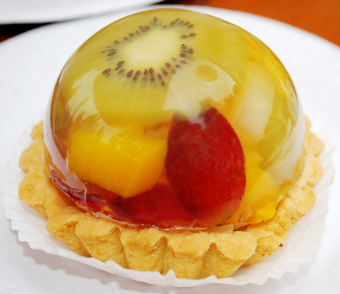 Unless you’ve managed to make it this far in life without setting foot in a store, you’re probably aware that jello,  popularly known as jelly by my British compatriots, is a genericization of the brand Jell-O which itself was derived from the word “gelatin”. (See: The Jiggly History of Jell-O) Gelatin is a protein derived from collagen via a process called hydrolysis, which breaks apart the bonds of this protein with water.

While hydrolysis may sound complicated, it’s simply a matter of boiling collagen rich animal byproducts, usually bones, connective tissue and skin, in water for many hours to break it down. The resulting broth is then carefully strained before the water is evaporated, leaving behind gelatin which can either be pressed into sheets or sold as a powder. Given that it is made from animal byproducts, gelatin and products containing it aren’t considered to be vegetarian and as a result, there are several plant-based alternatives such as Agar (derived from algae) and carrageenan (derived from seaweed) available on the market. (See: Why Seaweed is Sometimes Used in the Making of Ice Cream)

Though commonly thought of as being modern, gelatin based foodstuffs have existed since at least around the 15th or 16th centuries. Notably, in the late 17th century a Frenchman called Denis Papin invented a device he dubbed, “The Digester of Bones” (marketing genius that one). Papin’s original intention was to create a device not too dissimilar from a modern pressure cooker which utilized steam to boil down bones either for thickening gravies or creating a paste that could be readily consumed by the poor. Despite his noble intentions for the less affluent among us, the device ended up being too expensive for all but the wealthiest individuals to afford. In the end, the French (and eventually English) elite became enthralled with the jellies it produced, with one English observer noting: “The hardest bones of beef and mutton were made as soft as cheese, producing an incredible quantity of gravy and for close of all, a jelly made from the bones of beef, which makes a good relish, the most delicious I have ever tasted.”

The English are also credited with creating one of the earliest known recipes containing gelatin –  a dish called “calf’s foot jelly” – which was, unsurprisingly, made from calf’s feet, though the feet of deer, sheep or another similar animal could be substituted if necessary.

The exact recipe states: “Take two calf’s feet, and add to them one gallon of water; boil down to one quart; strain, and when cold, skim off the fat; add to this the white of six or eight eggs well beaten, a pint of wine, half a pound of loaf sugar, and the juice of four lemons, and let them be well mixed.  Boil the whole for a few minutes, stirring constantly, and then strain through a flannel.  This forms a very nutritious article of diet for the sick, and for those recovering from disease.  The wine may be omitted or added according to choice.”

Originally designated as a food for “invalids”, like many other gelatin-based foods, the dish became something of a delicacy amongst the upper classes. Later, its supposed high nutritional value saw various gelatin-based foods become popular with soldiers during the Napoleonic wars.

So where do pineapples come into this and why can’t you put them in jello? Well, to begin with, it’s not true you can’t put any pineapples in jello.  You just shouldn’t put unprocessed pineapples in it, unless you like the jello to stay in its liquid form.  You see, since gelatin is a protein, it is very susceptible to breaking down into its amino acid building blocks when it encounters enzymes known as proteases. As a result of this break down, the proteins are unable to tangle together to create a partially solid structure. Bottom line, without this linking, the jello never sets up.

You might be wondering at this point if there are any other common foodstuffs that similarly prevent jello from setting? Well, the short answer is yes- anything containing protease enzymes is a no-no in your jello. This includes several fruits such as papaya, mango, guava, pawpaw and kiwi as well as figs and ginger root. In addition to this, protease enzymes are also found in broccoli, mushrooms, spinach, wheat and soy beans, none of which you’re likely to add to jello, but hey, at least now you know. Finally, meat tenderizer, which is usually made from either the aforementioned bromelain or papain (derived from papayas) will, of course, stop jello from setting.

As with the pineapple, however, if the food items in question are first heated sufficiently to inactivate the offending enzymes (in the case of bromelain, heated to above 70°C or 158°F), they will then be fine to use in your latest jello creation.