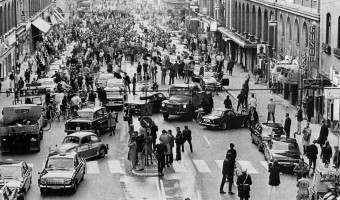 Meaning literally, “right traffic day,” Dagen Högertrafik, or “Dagen H” (H day), was the day in 1967 that the country of Sweden managed to successfully switch from driving on the left-hand side of the road to the right.

Not a spur of the moment decision, the Högertrafikomläggningen (“The right hand traffic diversion”) had been planned for years prior to implementation, in recognition of the inherent problems that arose by the fact that among the nations of Continental Europe, Sweden was the only country where people still drove on the left. (If you’re curious why, see: Why Some Countries Drive on the Right and Some Countries Drive on the Left.) In addition, the architects of the plan tapped into the widespread perception that having the steering wheel on the left while also driving there caused more head-on collisions.

Regardless, switching to the right was not a popular idea among Swedes, and when the idea was first floated in 1955, only 17% of the populace approved the change. However, realizing that in the late 1960s nearly 10,000,000 cars would cross Swedish borders one way or another, and knowing that that number was predicted to double by the early 1970s, Swedish leaders decided to make the switch.

Voting for the Statens Högertrafikkommission (HTK) in 1963, the Swedish Riksdag instituted a commission that established a four-year program to make the change and educate the populace.

Consulting psychiatrists on how to get public buy-in for the plan, the government sponsored campaigns that placed the Dagen H logo on everything from underwear (including advertising with scantily clad models wearing said underwear) to milk cartons. They even sponsored a song contest where the Telstars had the winner with Håll dig till höger, Svensson (“keep to the right, Svensson.”)

The switch necessitated the replacement or retrofitting of nearly every traffic light, bus (the doors were switched to the right-hand side), bus stop (which had to be moved across the street), road line and headlamp. At the time a trend had begun to arise to have headlamps direct their light to be slightly brighter on one side to illuminate the bordering ditch or sidewalk side of the road better. The rising popularity of this increased the pressure to make the switch sooner than later as those who had these headlamps made for left-hand driving, but driving on right hand roads, would reportedly blind oncoming drivers (with the extra light now shining directly into oncoming traffic instead of the side of the road) and vice-versa as cars crossed the borders. The final cost of Dagen H has been estimated at around £40 million in 1967 money or about £648 million today.

During the preparations for the single-day switch, the new traffic lights were wrapped in black plastic to keep from confusing drivers before the big day, and the road lines, which were painted white instead of the traditional Swedish yellow, were covered in black tape. (One imagines it was a banner year for a certain tape manufacturer.)

In addition, prior to H day 12,000,000 notes were distributed to citizens, and 130,000 tilted H signs were deployed along Sweden’s roads, to remind drivers of the switch.

On Sunday, September 3, 1967, for most of the country, all non-essential traffic was banned from 1 to 6 a.m. In these places, at 4:50 a.m., all vehicles that were allowed to drive had to completely stop, and then carefully change to the right-hand side of the road. At precisely 5:00 a.m., traffic was allowed to resume, at which time Swedish drivers experienced what Time magazine called “a brief but monumental traffic jam,” that happily resolved relatively quickly.

In some of its largest towns, including Stockholm and Malmö, the ban on non-essential traffic began as early as 10 p.m. the night before, and lasted until 4 p.m. that Sunday, in order to give workers time to re-do the intersections. In total, about 8,000 officials and 150,0000 volunteers were deployed that weekend, either to convert traffic signals and lines, keep the peace, or to assist pedestrians at dangerous intersections.

Anxious to try out the latest thing, hundreds of thousands of drivers poured onto Swedish streets that Sunday once their ban had been lifted. Surprisingly, there were only 157 accidents, with only 32 causing any personal injuries, and just “a handful of these were serious.”

The following Monday’s rush hour traffic went relatively smoothly all things considered, and the 125 reported traffic accidents were fewer than the typical daily number of 130-198. Many believe that the combination of the perceived risk with a lack of familiarity made motorists more careful than they’d normally be. (For similar reasons, pedestrians are actually about 28% less likely to be hurt while crossing a street if they illegally jaywalk, rather than cross at a crosswalk that doesn’t include any additional signals like traffic lights.) Within a few years, however, accident rates had returned to normal.

Generally considered a success, one of Dagen H’s key architects, Minister Olof Palme, exclaimed after the successful roll-out: “Fantastic! Can anyone imagine that the Swedish people experienced a revolution for just a few hours?”