What Happened to Huey, Dewey, and Louie’s Parents?

January 28, 2016 Samantha
Karla asks: I was just wondering if it’s known what ever happened to Huey, Dewey, and Louie’s parents? 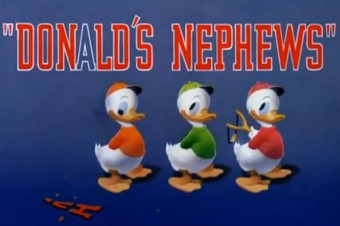 In 1934 Walt Disney introduced the world to Donald Duck, Mickey Mouse’s lovable ill-tempered friend. Donald was an instant success, becoming one of the most popular cartoon characters of all time. Three short years after his creation, comic artist Al Taliaferro got the idea to create three nephews for Donald: Huey, Dewey and Louie. In the trio’s comic debut on October 17, 1937, Donald received a letter from his cousin, Della, just before the boys arrived:

“Dear Donald:
I am sending your angel nephews Louie, Huey and Dewey, to stay with you while their father is in the hospital. A giant firecracker exploded under his chair. The little darlings are so playful. I hope you enjoy them.

With open arms and a willing heart, Donald welcomed his nephews into his home. Of course, he soon realized that the “angels” and “little darlings” that Della referred to were rebellious, destructive monsters.

So what happened to their dad? As Della’s letter touched upon, their dear old dad was sent to the hospital after a firework exploded under his chair- a firework placed there by his own sons: Huey, Dewey, and Louie (or perhaps it was their phantom brother, Phooey!- the mysterious fourth nephew who appeared at random times in various comic panels).

Drawing from what little information is available, Daddy Duck either died in the hospital or abandoned his kids and fled as far away as possible to avoid any more of their high jinks.

So what about Huey, Dewey, and Louie’s mom? Dumbella Duck, aka Della, is a bit more complicated of a case. In her aforementioned letter, you may have noticed that it was signed, “Your cousin” not “Your sister.” She also explicitly states the three kids in question are Donald’s nephews. This would imply that Della was not their mother given she is Donald’s cousin here, unless the boys’ father was supposed to be Donald’s brother and we simply have a case of cousin marriage- not totally uncommon in this era (see: The Surprising Truth About Cousins and Marriage). Another possibility is that she is somehow Donald’s cousin and sister, but we’re not going to go there…

If the “Donald’s brother was their father” scenario isn’t correct, given that Della was seemingly caring for the children while their father was in the hospital, it would seem to indicate that their real mother was out of the picture at this point.

However, when a similar letter is read in the 1938 cartoon, Donald’s Nephews, the letter and story are modified slightly,

I am sending your angel nephews to visit you -Sister, Dumbella

To make things more confusing, when Carl Barks released his version of the Duck family tree in the 1950s, he refers to the triplets’ mom as Thelma Duck (perhaps going back to the original comic book story where Della was a cousin). On this line thinking, some fans have suggested that Dumbella, Della, and Thelma are different characters, while others argue that Della is just short for Dumbella. Since the name Thelma is never used in the comics or theatrical shorts, and her name changed back to Della Duck with Don Rosa’s 1993 revised version of the Duck family tree, Thelma seems to be null and void and simply a mistake in Barks’ work.

Given later story lines, it would appear the “Della and Dumbella are the same duck” theory is correct. For instance, in the comic book series, The Life and Times of Scrooge McDuck, written in the mid-1990s, Donald and Della were shown wearing identical sailor outfits as kids and depicted not only as siblings, but as twins.

Thus, it would seem that when Della was originally introduced as Donald’s cousin, her character (and the boys’ backstory) was not given much of any thought as Huey, Dewey, and Louie at this point were only supposed to be around for a short visit- just a convenient plot device for an issue of the comic.  However, when they put the boys in the cartoon, they decided to explain where the characters came from in a way that made a little more sense; so Donald ended with a sister, instead of a cousin, sending him his nephews.

This brings us back to what happened to Della Duck.  It turns out that in the Donald Duck comics and cartoons, aside from the aforementioned letter, neither parent was ever heard from again. So did they die or just abandon Huey, Dewey, and Louie?

According to the Duck family tree, Della and Donald are equal in terms of their familial relationship with Scrooge McDuck, yet Donald is always the one referred to as Scrooge’s closest living relative. This strongly suggests that she died, perhaps along with her husband. Or, as others have speculated, they simply faked their deaths and went into hiding to avoid having to take back their children. (Donald himself would later abandon the children for a while, leaving them in the care of their great uncle Scrooge while he went off and joined the navy.)

That said, while Scrooge’s frequent assertions about Donald seem to indicate Della was a dead duck, in the comic strip, Amen!, the triplets are depicted saying prayers for their mom and dad, which may indicate that they are still alive and well…somewhere. Or maybe no one bothered to tell them their parents had died.

Whatever the case, in the 1942 cartoon, The New Spirit, it stated that Donald had officially adopted the triplets. As mentioned, the parents were never heard from again.