Mother of the Father of His Country 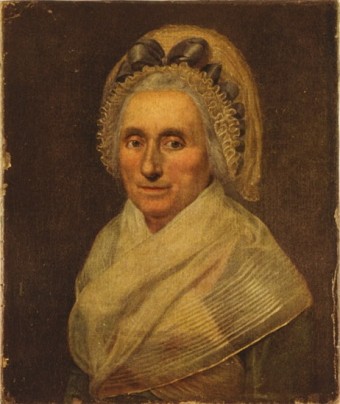 Even extraordinary people suffer from ordinary problems. And having a difficult relationship with a parent is a pretty common one. (No, not us, Mom.) Say hello to George Washington’s mother, Mary Ball Washington.

Mary Ball was born on a Virginia farm in 1708. Her father, Joseph Ball, died when she was three years old, and her mother, also named Mary, died when she was twelve. Afterward, the girl was raised by George Eskridge, a family friend. At 23, she married Augustine Washington, a 37-year-old widower with three children. The couple had six children together (one died in infancy) before Augustine died in 1743, leaving Mary to raise their five surviving children alone.

George Washington, named in honor of George Eskridge, was Mary and Augustine’s oldest son. He was only eleven when his father died. As the oldest male in the house, it fell upon him to help raise his younger siblings and also to help run the farm, and because Mary did not remarry, George had to shoulder these responsibilities for the rest of his childhood.

TOO CLOSE FOR COMFORT

Perhaps because she had suffered so much loss over the years—or because as a single mom raising five kids on a farm, she just needed a lot of help—Mary became extremely possessive of George. She took no interest in his personal ambitions other than to feel threatened by them, and she was jealous of any time that he spent away from the farm. She habitually accused him of neglecting or even abandoning her, even though he was by all accounts a devoted and dutiful son.

When George was 14, his older half-brother Lawrence and some well-connected family friends hatched a scheme to get him out of the house and away from his mother by securing a position for him as a midshipman on a Royal Navy frigate. After a lot of persuading, Mary agreed to the plan, but she changed her mind at the last minute, and George, bags packed and ready to go, had to unpack and remain on the farm with her.

Mary didn’t know it (and even if she had, she probably wouldn’t have cared), but she’d done George a big favor by keeping him out of the navy. Denied his chance for adventure on the high seas, George opted to became a surveyor, which could be a lucrative profession in the 1740s. The population of the American colonies was growing, and as people carved new settlements out of the wilderness, they needed skilled surveyors to parcel up the land. Cash was often in short supply in the back country, so surveyors were commonly paid in land. With the knowledge they gained on the job, the surveyors were able to select some of the best parcels for themselves. Young George made the most of the opportunity: By the time he was 20 he owned more than 2,300 acres in northern Virginia, which served as the basis for his personal fortune.

Washington’s knowledge of the back country made him valuable to the British, who by the 1750s were locked in a struggle with France for control of the Ohio Country (modern-day Ohio and Indiana, plus parts of Pennsylvania and West Virginia). In March of 1755 he was offered a position as an aide to General Edward Braddock, who’d been sent from England to drive out the French. Washington accepted and asked his younger brother Jack, who lived with their mother on her farm, to move to his farm, Mount Vernon, to look after the place.

That, of course, would have made life more difficult for Mary. When she learned what her sons were planning, she was furious. “Perhaps feeling bereft of family help at [her] farm, Mary Ball Washington arrived at Mount Vernon hell-bent upon preventing George from joining Braddock,” biographer Ron Chernow writes in Washington: A Life. “Mary, appearing like the wrath of God, insisted upon settling her son’s future plans on the spot.”

This time George stood firm. He resolved to join the general’s staff as planned, but his mother’s haranguing caused him to miss an interview with the general’s staff in Alexandria, Virginia. “The arrival of a good deal of company, among whom was my mother, alarmed at the report of my intentions to attend your fortunes, prevents me the pleasure of waiting upon you today as I had intended,” he admitted in a letter to Braddock.

If Washington hoped to see action, he would not have long to wait. On July 9, 1755, General Braddock and 1,400 troops (including Washington) had just crossed the Monongahela River in Pennsylvania when they were attacked by a force of some 900 Indians and French soldiers from Fort Duquesne, where the city of Pittsburgh is today. More than 400 British soldiers died in the battle, and hundreds more were wounded, including Braddock, who died a few days later. Washington was luckier: Two horses were shot out from under him and at least four bullets ripped through his uniform (and his hat), but they missed his body, and he survived the fight with barely a scratch.

By any measure, the Battle of the Monongahela was a rout. As Washington had been warning Braddock for months, the British tactic of fighting out in the open and shoulder-to-shoulder was no match for the French and Indians, who fired from behind rocks and trees and scattered when fired upon, only to reappear in unexpected places to renew the attack. Only 23 of their men died in the battle and only another 16 were wounded.

But Washington had shown great courage and leadership on the battlefield, riding back and forth to rally the troops and organize an orderly retreat to safer ground. He returned home “the Hero of the Monongahela,” and one month later was named supreme commander of all the military forces in Virginia. He was 23.

None of this mattered a whit to Mary Washington, who was still angry with her son for abandoning her to fight in a war that, as far as she was concerned, was none of his business. And her “suffering” wasn’t over: Washington spent the next three years as head of the Virginia forces and was often away from home, defending frontier settlements from Indian attacks. He finally retired from his post in December 1758, much to his mother’s relief. There had been “no end to my trouble while George was in the army,” Mary Washington wrote to a relative, “but he has now given it up.”

A few weeks later, Washington gave his mother a new reason to be mad at him when he married a wealthy widow named Martha Custis in 1759. There’s no record of Mary having attended the wedding, even though she lived nearby, and it’s possible she didn’t even meet her daughter-in-law for another year. And though Mary lived for another 30 years, historians believe she never visited her son and his wife at Mount Vernon.

Washington made regular trips to visit his mother on her farm (always keeping the visits short), and he frequently gave her gifts of money. By the early 1770s, Mary, now in her sixties, was too old to manage the farm, so Washington bought her the house next door to his sister Betty’s home in Fredericksburg, Virginia, where she lived for the remaining 17 years of her life. In spite of this and other acts of kindness over the years, the relationship between mother and son never healed.

Duty called again in June 1775, when Washington was appointed commander in chief of the newly formed Continental Army at the start of the American Revolution. Before he went off to war, he arranged for a cousin to look after his mother and to take care of any financial needs she might have. That would have satisfied most mothers, but not Mary. Just as in the French and Indian wars, she was furious that her son would place his country’s needs ahead of her own, and she complained “upon all occasions and in all companies,” as Washington put it, that he had abandoned her and left her destitute. More than one person who met Mary Washington during the war and listened to her bellyaching assumed she’d sided with the British against her own son. If that wasn’t enough, in 1781 Mary petitioned the Virginia state assembly to provide her with an emergency pension to help her pay some taxes that were due. Washington managed to get the matter quashed before it caused him public embarrassment, but the incident only further strained his difficult relationship with his mother.

Washington led the American forces to victory, of course, but even that didn’t impress his mother, something she made clear following the British surrender at Yorktown, when someone made the mistake of referring to her son as “His Excellency” in her presence. “His Excellency? What nonsense!” she sputtered.

Just as Washington continued to provide for his mother after the war, Mary continued to complain. “I never lived soe pore in my life.…I should be almost starved,” she wrote in one letter to her son while he was presiding over the Constitutional Convention. In time, her whining became so incessant that George suggested she sell her house and live with one of her children—one of her other children—but Mary stayed put. She lived long enough to see her son inaugurated as the first president of the United States in April 1789, but his biographers have found no record of her ever congratulating her son on his achievement.

Four months later, on August 25, 1789, Mary Washington died from breast cancer at the age of 81. She left her oldest son some of her most treasured possessions, including a mirror, her bed, and a favorite quilt. But rather than accept the items, Washington gave them to his sister.

Washington did attend his mother’s funeral, but neither he nor anyone else delivered a eulogy, and more than 40 years passed before anyone put a marker on her grave. By then Washington himself was long dead, and the location of his mother’s grave had been forgotten, something that stunned presidential biographer Jared Sparks when he went looking for it in 1827: “The grave of Washington’s mother,” he wrote, “is marked by no visible object, not even a mound of earth, nor is the precise spot of its locality known.…For a long time a single cedar tree was the only guide to the place; near this tree tradition has fixed the grave of Washington’s mother, but there is no stone to point out the place.”