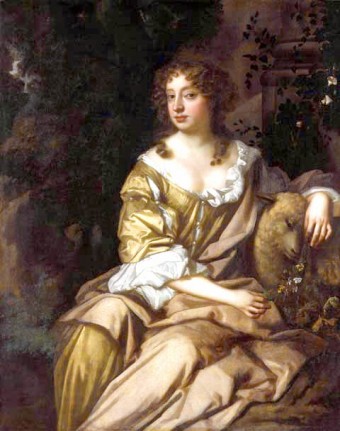 Nell Gwynne was that rarest of creatures – a royal mistress who was as popular with the people as she was with her exalted lover. Although England’s Charles II had many mistresses throughout his lifetime, his “pretty, witty Nell” held a special place in his affections.

Born on Feb. 2, 1650, probably in London, Eleanor Gwynne sprang from the humblest of origins. Her mother appears to have run a brothel in which Nell helped out, possibly even working as a child prostitute, but this isn’t definitively known. Her father was out of the picture during her childhood as far as historians can tell.

In her early teens, she got a job as an “orange girl” at the Drury Lane Theater. Orange girls were essentially scantily clad young girls who sold various fruits and sweets at the theater and also served as message carriers between men in the audience and the actresses back stage.

Nell was petite and shapely with a pretty heart-shaped face, hazel eyes, and curly chestnut hair. Needless to say, she excelled at her job and it wasn’t long before the young teen girl made the transition from scantily clad orange girl to the stage around the age of 14 or 15.

In doing so, she soon caught the eye of numerous men, most notably beginning an affair with actor Charles Hart, who, among other things, also gave her acting lessons.

As her star as an actress rose, she became involved with Charles Sackville, Earl of Dorset, who Nell dubbed Charles the Second.

A couple years later, Nell became acquainted with the individual she dubbed Charles the Third, King Charles II. Unlike many other of Charles’ mistresses who were brief affairs, Nell would be favored by the King for almost two decades, remaining one of the King’s mistresses for the rest of his life.

While she had her rivals in the early days of her dalliances with the King, she soon became one of his favorites, giving birth to the King’s son Charles, the future Duke of Albans, in 1670. Another son, James, followed in 1671, but died in 1680. Among other places of residence, the King gave Nell a luxurious home in Pall Mall so she could be close to him while he was in residence at his London palaces. Her possessions included a magnificent silver bed and a warming pan with the inscription: “Fear God and serve the King.”

Unlike most of the King’s other mistresses, such as Barbara Palmer, Lady Castlemaine, Moll Davis, Lucy Walters, and Louise de Keroualle, Nell demonstrated little in the way of political aspirations. She wasn’t greedy, initially only asked the King for 500 pounds a year. Later, as she rose among the ranks of the King’s mistresses, she would be granted significantly more.

Nell endeared herself to Charles – and the British public – with her good-tempered high spirits, excellent sense of humor (nicknamed by Sameul Pepys ‘pretty, witty Nell’), and down-to-earth manner. In an era dominated by Puritanism, Nell was a saucy, lusty, and earthy creature who made no attempt to hide her true nature or where she came from. The King and his subjects loved her for it.

The memoirs of the Comte de Gramont give an account of Nell’s saucy wit in 1681:

Nell Gwynn was one day passing through the streets of Oxford, in her coach, when the mob mistaking her for her rival, the [Catholic] Duchess of Portsmouth, commenced hooting and loading her with every opprobrious epithet. Putting her head out of the coach window, “Good people”, she said, smiling, “You are mistaken; I am the Protestant whore.”

King Charles’ death in 1685 ended their affair. His last concerns were for Nell and he implored his brother, the soon-to-be James II, to “let not poor Nelly starve” on his death bed.

James carried out his brother’s wishes. He paid Nell’s debts and provided her with a pension (although not as generous as the former King’s at just 1,500 pounds per annum.) Nell outlived her third Charles by only two years, dying at the young age of 37 on November 13, 1687, with her health rapidly deteriorating after experiencing two strokes.

Her funeral drew a large crowd, a testament to her popularity. The sermon was delivered by Thomas Tenison, who eventually became the Archbishop of Canterbury, another remarkable distinction given to this singular royal mistress.