This Day in History: October 2nd- A Well Earned Seat 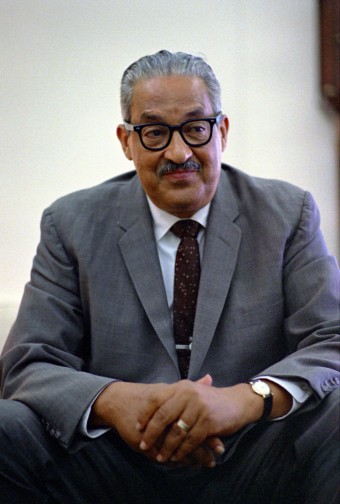 Thurgood Marshall was born on July 2, 1908, in Baltimore, Maryland. He graduated with honors from Lincoln University and, with his mother, Norma, pawning her engagement and wedding rings to help pay for his entrance fees, went on to finish first in his class at the Howard University School of Law. His first choice had been the University of Maryland, but they did not admit black people at the time.

After graduating law school, he began handling numerous civil rights cases.  While he was swamped with work, many of his clients had little money to pay him, resulting in Marshall falling deeply in debt.

However, his work did not go unnoticed and in 1936, he was offered a salaried position ($2,600 per year, or about $44,000 today) by the National Association for the Advancement of Colored People (NAACP).

During his work there, he was involved in many notable cases, including in 1954 appearing before the Supreme Court to argue the case of Brown v. Board of Education of Topeka. In this landmark decision, racial segregation in the United States public schools was ruled unconstitutional. All total, Marshall won 29 of 32 cases he brought before the Supreme Court.

Marshall’s work while with the NAACP also did not go unnoticed, and in 1961, President John F. Kennedy appointed him to the US Court of Appeals, but he wasn’t confirmed until the following year, as several Southern senators opposed his nomination.

Beyond outside opposition, Marshall was also somewhat hesitant to accept the position in the first place due to a fear that it would be seen by his colleagues as abandoning the fight for Civil Rights. He stated,

I had to fight it out with myself. But by then I had built up a staff — a damned good staff — an excellent board, and the backing that would let them go ahead. And when one has an opportunity to serve the Government, he should think twice before passing it up.

Working his way up the ladder, in 1965, President Lyndon B. Johnson appointed Marshall Solicitor General. At the same time, the United Kingdom and the United Nations asked for his help in drafting the constitutions of the new African nations of Ghana and present-day Tanzania.

This brings us to 1967 when President Johnson nominated Marshall to the Supreme Court on June 13 of that year. The nomination was confirmed by the Senate on August 30 and he was sworn in on October 2, making Marshall the first black person to serve as a Supreme Court Justice.

After serving for 23 years in this capacity, Marshall’s health began to fail. Although he supposedly wasn’t thrilled that George H. W. Bush would be the one to pick his replacement, he stepped down from the bench in 1991. (Bush, of course, nominated Clarence Thomas.)