This Day in History: October 1st- An Uncanny Talent 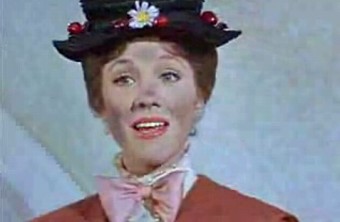 Singer and actress Julie Andrews has been enchanting audiences for over half a century with her charm, elegance, and perfect-pitch voice. There are few artists alive today that can rival her impressive body of work across the stage, screen (both big and small), and as a recording artist.

Born on October 1, 1935 at Walton-on-Thames, England, Julie came from a musical family. Her mother was a pianist, and her stepfather (who gave her the surname Andrews) sang in music halls. The couple traveled around England performing, taking little Julie with them. 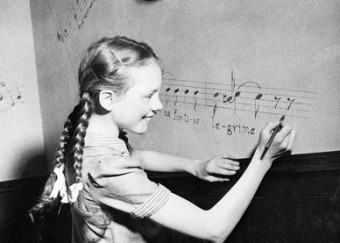 She made her informal debut as a singer at age eight during World War II. While hunkered down in air raid shelters, Julie would lead sing-alongs with her neighbors providing a welcome distraction to the threat of enemy bombs.

Her mother realized they had a major talent on their hands and arranged for lessons with an acclaimed concert singer. Julie was soon appearing in the same venues as her parents.

By age 12, she was singing in London’s West End and was the youngest singer to appear before a British monarch at a Royal Command Performance when she sang an aria from Mignon for King George VI. 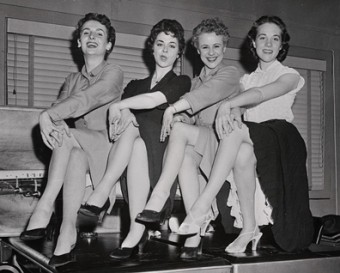 Six years later, Julie was offered the lead role in The Boy Friend, a popular West End musical that American producer Cy Feuer was planning to bring to Broadway with an authentic British cast. She was apprehensive about leaving home, but signed a year-long contract. Her portrayal of flapper Polly Brown made 18-year-old Julie Andrews a star.

Andrews was nominated for a Tony Award in 1956 for My Fair Lady (she was the youngest actress to play the part of Eliza Doolittle), and was nominated once again in 1961 for her portrayal of Queen Guinevere in Camelot. Strangely enough, she was passed over for the roles in both film versions of these plays. (Audrey Hepburn couldn’t sing a note in My Fair Lady – lame!)

But Julie got plenty of quality screen time soon enough. Andrews’ film debut was Mary Poppins, a charming tale about the sensible but magical nanny who teaches her charges’ hyper-capitalist father a thing or two about priorities. Her very first film performance won her the 1964 Best Actress Oscar. But even bigger things were to come.

The biggest success of a stellar career came in 1965 with The Sound of Music, a film based on the story of the Von Trapp family and their escape from Austria during World War II. It was the highest grossing film up to that time. Andrews was once again nominated for an Oscar, and the film won the 1965 Best Picture of the Year.

Two years later, she starred in Thoroughly Modern Millie and married her second husband director Blake Edwards. They were married until his death in 2010.

During the ‘70s and 80’s, Julie began writing children’s books (some illustrated by her first husband Tony Walton), and taking more serious roles (many in films directed by second husband Blake Edwards). In the ‘90s, she become involved in international charity organizations. One of her positions was Goodwill Ambassador for the United Nations Development Fund for Women (UNIFEM).

Even with all her charitable work she still occasionally appears in films, including The Princess Diaries, Shrek, and Despicable Me, along with continuing to write, sing, and tour around, delighting fans all over the world.