How Fluorescent Lights Work and Why They Are Sometimes Noisy 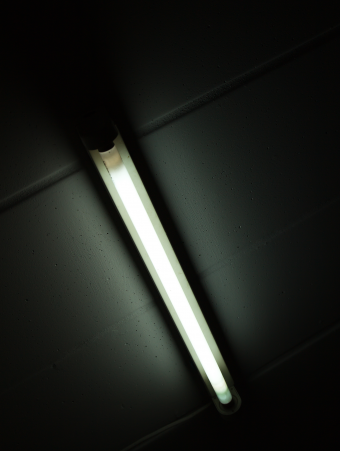 Comprised of a sealed tube coated on the inside with a phosphor powder and filled with (usually) argon and a tiny bit of mercury, the way in which fluorescent bulbs produce light is extremely fascinating.

While the underlying physical mechanisms in the fixture and bulb can vary a bit in design, in a nutshell a fluorescent light works via two electrodes at either end of the tube emitting electrons as they heat up. Eventually, an arc is created (via varying mechanisms depending on the fixture and bulb design) with the electrons shooting across the bulb through the ionized gas from one electrode to the other; as they move through the tube, the tiny bit of mercury in the bulb is vaporized and as the electrons collide with its atoms, it excites the electrons in the atoms to higher energy levels. However, this higher energy level is unstable and post-collision, as the electrons rapidly return to their original energy level, they release photons, albeit mostly ultraviolet (UV) light that we humans cannot see. Not a very useful light source at this point!

The photons in the UV light, however, in turn excite the electrons in the phosphor that is coating the bulb, similarly causing them to move away from their nuclei to a higher state; the phosphor electrons then quickly return to their original state, at which point they also release energy in the form of photons, but this time mostly in the human visible spectrum, creating the bulk of the visible light that makes these bulbs useful in office buildings the world over.

Now to the buzzing- Absent preventative measures, the current in the fluorescent tube would rise to dangerous levels owing to the fact that the electrical resistance of the ionized gas in the tube drops progressively as it heats up. So without something put in place to stop the current rising too much, this would be a cascading problem. Eventually, it could well flip your circuit breaker or the bulb could explode. Whatever the case, your lights would quickly stop working.

To manage that, fluorescent bulb fixtures are equipped with a ballast of some sort. This ballast classically comes in the form of an iron core wrapped in copper wire. The result is a device that slows the current’s growth, keeping it at a safe level for the bulb to operate efficiently. Important to the discussion of buzzing is that the electricity energizes the ballast into producing a magnetic field. This is, in fact, how this type of ballast works in the first place- as more current is passed through, the magnetic field gets bigger, opposing the change in the current flow and thus slowing its growth enough for the alternating current (AC) to switch directions, with it dropping to zero and going back up in the opposite direction in the process.

All of this switching back and forth further affects the ballast’s electromagnetic field, since each time the current switches direction (every half cycle), the polarity of the magnet also switches; so, since the electromagnet is fluctuating at twice the frequency of the AC current, its flicker rate is at 100 Hz or 120 Hz, depending on what country you’re in.

During these fluctuates in magnetic field, the ballast’s core is physically squeezed and released in a process called magnetostriction that, at a frequency of either 100 Hz or 120 Hz, produces the infamous buzz.

Of course, not all fluorescent bulb fixtures’ buzzes are alike, and this is due to differences in the fixture’s ballast type, size, how the ballast is mounted, fixture design and the degree to which the ceilings, walls, sheet metal, etc. muffle or amplify the sound.

Such a common nuisance, the industry publishes “sound ratings” for ballasts, and even recommends in which settings different ratings are appropriate. For example, those ballasts with an “A” rating are the quietest (20-24 decibels), and they are recommended for libraries, churches, reception areas and in TV and radio stations, while only a “C” level (31-36 decibels) is recommended for a “general office area,” and retail stores can get by with “D” ratings (37-42 decibels).

For those who hate the buzzing (or perhaps have issues with migraine headaches being induced by the fluorescent bulbs and their flickering light), electronic ballast (as opposed to the old school magnetic ones) are available and are even quite common today, such as generally found in Compact Fluorescent bulbs (CFLs). These ballasts typically operate at a drastically higher rate than 100 Hz or 120 Hz, usually in excess of 20,000 Hz. It should be noted, though, that if you switch to one of these electronic ballasts in your older fluorescent light fixture (something that is surprisingly cheap to do), you do need to swap out your fluorescent bulbs to a variety that is rated to work with your new ballast.