The Story of Natasha Wagner, the Woman With the “Perfect Butt” 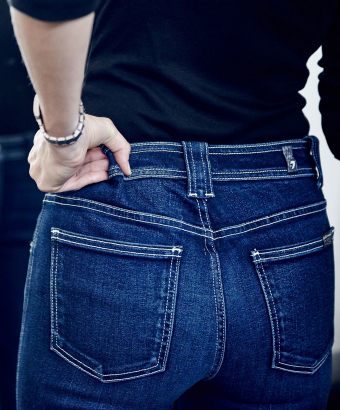 Image Courtesy of 7 for All Mankind

Women’s clothes come in a baffling range of (often inconsistent) sizes which can make finding clothes that fit just right an unreasonably difficult task for many women. To help combat this, the clothing industry has a number of tricks up its immaculately tailored sleeves; in regards to jeans, one of those tricks is Natasha Wagner’s butt.

Born in 1981, Natasha Wagner took the modelling world by storm about a decade and a half ago when it was found that she had the “perfect butt”. Since then, she has set the industry standard for how women’s jeans should fit, working with big names like Levis, 7 for All Mankind, Old Navy, Gap, and Paige Denim, among many, many others.

Now the word “perfect”, especially in regards to a woman’s posterior is an extremely subjective thing and different people have wildly differing ideas of what would make someone’s backside “perfect”. But what does it mean for the fashion industry? A perfect derrière is one that is neither “too big, too small, too perky or too flat”. In other words, the perfect caboose is one that is exceptionally average in every single way. Natasha Wagner possesses and painstakingly maintains such a set of average buns.

Standing at 5 feet 8 inches tall, Wagner is described as having ideally proportioned hip to waist measurements, with her 28-inch waist squarely in the middle of the standard jean size range. Wagner was initially unaware of all this until a friend’s modelling agency took her measurements out of curiosity in 2001 when they noticed her petite, but curvy frame. The agency then passed the measurements on to a denim company looking for a model of roughly her build.

You see, due to her ideal (by fashion industry standards) measurements, any jeans that fit her could be reliably expected to fit reasonably well a range of other women, since, as mentioned, Wagner’s 28 inch waist falls right in the middle of the standard jean-size range which goes from 24 to 32 inches. Elaborating on this, fashion designer Julien Jarmoune said that Wagner possesses, “The perfect marriage of body types… Because if you fit with someone who is too curvy (tiny waist, big butt), or with someone who has a straight body (no hips), you are limiting yourself to just a certain body type. A jean that is fit on a straight body will never look good on someone who has curves. That’s why Natasha comes into play perfectly. She has the best of both worlds where she’s slim and she still has shape. Additionally, she has great legs that are the perfect length (she fits our standard 30-inch leg inseam flawlessly) so that our jeans will work for someone who is short or tall.”

So by making a design that fits Wagner perfectly, then scaling the size of the jeans that fit her up or down, jean makers can essentially make a single design for a pair of pants that will be at least in the ballpark of fitting women of most body types.

As a result, since her initial foray into the world of modelling, Wagner has been used as a template of sorts for the fashion industry, often being called in just to put on a new pair of jeans to see if they fit.

On top of this, due to her experience in the industry that has consisted almost exclusively of trying on jeans, Wagner is today also called upon as a jean expert, being consulted by various designers and manufacturers alike to offer advice on improvements that could be made to their products. As Re/Done co-founder Sean Barron said, “She has a complete understanding of what makes a jean fit.” Wagner herself stated,

Once I had learned the jean terminology, I began to help designers flesh out details or catch things that may have been overlooked. They’re busy, they’re working on the current season plus a year ahead. I’m just focusing on fit and am able to point out specifics like if the back rise is pulling or if there’s bubbling or roping. A lot of the time you’ll get what’s called ‘slippage’ on a jean, where the denim pulls and you can kind of see the weft in the garment. So I can recommend trying a different type of construction or a different side seam. I know how the body should look in the jean, so I’m able to tell them things like, ‘Kick out the back rise,’ or ‘Take a measurement from the top of the rise and add it to the bottom of the rise to give it a nicer butt shape and a lift.’

In order to maintain her self-described “median” figure, Wagner subjects herself to a strict diet and training regiment that consists of squats (a drastically underrated exercise for both men and women), running and time on an elliptical machine.

In regards to Wagner herself, she feels: “Very flattered that anyone would say that I have a perfect butt.” Adding that when she was first informed of her measurements that she felt as though she’d “won the lottery” because they were exactly the measurements the fashion industry was looking for in someone to model jeans, allowing her to enjoy a lucrative, if somewhat unusual career in one of the most highly competitive industries on Earth.