This Day in History: August 4th- Drinking the Stars 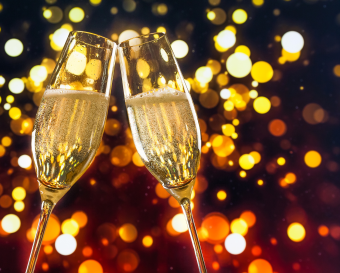 Legend has it that Benedictine monk Dom Pérignon stated, “I am drinking the stars!” after tasting the result of a botched batch of wine on August 4, 1693, thus “inventing” champagne. Of course, the story is certainly false, with the first documented mention of that line appearing in an advertisement in the late 19th century.

In truth, Pérignon’s life work was partially in trying to get rid of the pesky “second fermentation” bubbles that had plagued wine makers for seemingly as long as there have been wine makers.

Since bubbles in wine occur naturally, no-one could really be credited with the invention of sparkling wine. The bubbles were considered a nuisance the ancient Greeks and Romans attributed to the phase of the moon or evil spirits. In reality, if the fermentation process is interrupted (usually due to a drop in temperature) any left-over yeast goes dormant. When the temperature rises and enough sugar is present, the yeast begins the fermentation process once again. Yeasts produce carbon dioxide during fermentation, and if the wine is kept in an impermeable container, the carbon dioxide gas can’t escape. Instead, it will dissolve into the liquid, resulting in sparkling wine.

Of course, this was potentially a major problem for wine makers before bottles were made capable of containing the pressure this second fermentation could potentially produce in a sealed container. If enough sugar was left, the pressure could build to the point that the corks would pop out; or in some cases, the wine bottles themselves would explode, often setting off a chain reaction with other wine bottles under pressure exploding. This was all very dangerous to any worker standing nearby, not to mention very wasteful.

That’s not to say sparkling wine wasn’t successfully made. Among others creating sparkling wine before Pérignon’s time, English scientist Christopher Merret is known to have experimented with adding sugar to wine to intentionally induce second fermentation decades before it is claimed Pérignon invented the process.

So why is a monk named Dom Pérignon in the Champagne region of France given the credit for “discovering” the bubbly delight of sparkling wine? This was first suggested a little over a century after Pérignon’s death by one of his successors, Dom Groussard, attempting to bolster the Abbey’s reputation. The myth was further popularized during the Great Depression when a group of Champenois hosted a three-day party to commemorate the 250th anniversary of Dom Pérignon’s “invention” of champagne.

What Dom Pérignon actually did accomplish is no less laudable, but is lost in the shadow of his fictional discovery. He made significant advancements in the production of red wine manufacture – declared to be the best in France by the Sun King Louis XIV. Ironically, some of his rules on wine making were designed to explicitly prevent second fermentation, as mentioned a notorious side effect of the climate in the Champagne region of France Pérignon was working.

By any reckoning, Dom Pérignon was a very valuable cellar master for his abbey in Hautvillers. Under his tutelage, the abbey doubled the size of its vineyards and improved its wine quality considerably. To honor his work, when he died in 1715, Pérignon was buried in the section of the church usually reserved for abbots.