This Day in History: August 3rd- The Peace of the Ladies 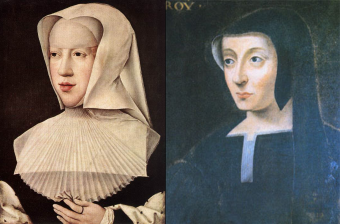 Back in 1525, the Hapsburg Holy Roman Emperor Charles V’s forces had defeated France at Pavia in Italy. King Francis I of France was taken prisoner and was forced to sign the Treaty of Madrid. He ceded lands in Italy, Flanders, Artois, and Tournai, as well as parts of France, to the Emperor. Charles was quickly beginning to dominate all of Europe, a fact that did not escape King Henry VIII of England and Pope Clement. To even out the balance of power, they both shifted their allegiance to France.

The Emperor’s Protestant mercenaries sacked Rome in 1528, and France retaliated by invading Naples and Milan. But when the Genoese fleet defected over to the Emperor’s side any hope of a French victory was lost, and by that point both armies were broke and exhausted.

With a peace needed, Louise of Savoy, mother of King Francis and regent of France in his absence, and Margaret of Austria, regent of the Netherlands and the aunt and former guardian of Charles V, began negotiations, ultimately reaching an agreement on August 3, 1529.

Among other things, Francis was to renounce his claims in Italy and as overlord in Artois and Flanders. In return, Charles would not pursue his claims to Burgundy (not at the moment anyway), and would accept a ransom for the two French princes he held in his possession. To solidify the treaty, the marriage of Louise of Savoy’s daughter Marguerite of Navarre to Charles V was also arranged.

Francis told Henry VIII and the Pope to take a hike (again) and gladly received the spoils of Charles de Bourbon and the Prince of Orange. Henry of England was not happy about being the odd man out, especially when it was his unwanted wife Catherine of Aragon’s nephew, Charles V, causing so much of the trouble. And how was he to know Catherine wasn’t acting as a spy for the Emperor? That was another reason (aside from the impatiently waiting-to-wed Anne Boleyn) that Catherine had to go.

Unsurprisingly, the efforts of these good ladies didn’t last long. The Italian Wars resumed as France invaded the country three times to overthrow Spain and the Emperor as the dominant power on the peninsula.