This Day in History: August 12th- An Artist, a Mystic, and a Madman 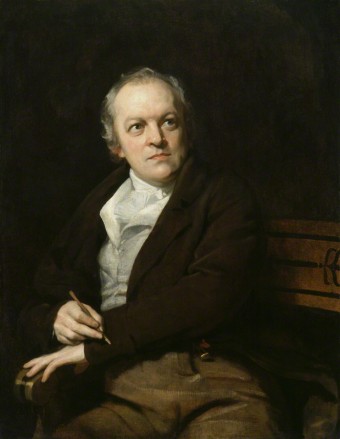 “Shall I call him artist or genius – or mystic – or madman? Probably he is all” – Henry Crabb Robinson

One of the most influential figures to emerge during the Romantic Age, or any age, was William Blake. Poet, Printmaker, Painter, Mystic and Maverick, Blake has been a muse for countless artists, writers, musicians, and original thinkers since his death on August 12, 1827.

William Blake was born in London on November 28, 1757. He had very little formal schooling, receiving most of his education at home from his mother.

His parents were supportive of his artistic talents and sent ten-year-old William to drawing school. Four years later, he was apprenticed to an engraver. His boss happened to be the engraver to the London Society of Antiquaries. One of Blake’s duties was to do drawings of the monuments and tombs in Westminster Abbey.

This task piqued young William’s interest in Gothic art which grew into a life-long love. He would also eschew contemporary literary trends in favor of the ancient ballads and works of the Elizabethan-era writers, such as Spenser and Shakespeare.

At age 21 in 1779, Blake began his career as a journeyman engraver, the vocation that put food on his table while he pursued his other artistic interests for pleasure. He began painting at the Royal Academy of Art’s Schools of Design that same year, and gave his first exhibition the next.

In August of 1782, he married Catherine Sophia Boucher, his “sweet shadow of delight.” Catherine was illiterate at the time, so her husband taught her to read and write, as well as his trade as an engraver. She became Blake’s indispensable assistant and number one fan right up to the day he died.

The following year, Blake published a collection of poems he had written over the preceding 14 years called Poetical Sketches. In 1787, he faced a life-altering personal trauma when his 24-year-old brother Robert died of tuberculosis. Although devastated by the loss, Blake maintained that at the moment of his brother’s death, he witnessed Robert’s spirit leave his mortal body. “At the last solemn moment, the visionary eyes beheld the released spirit ascend heaven ward through the matter-of-fact ceiling, ‘clapping its hands for joy.’” This was just one of many such visions Blake claimed to have had throughout his lifetime.

Beyond also stating that he often conversed with his brother’s spirit, he credited said spirit with inspiring him to invent a new method of illuminated etching that gave him control over every aspect of his art. He felt that the printed word was inadequate to create the effect he desired, and that illustrations were needed to take his poetry to the next level. He released his first illuminated book, Songs of Innocence, in 1788.

Blake’s work was clearly influenced by history, but he was greatly moved by the revolutionary times he lived in. He was a man of great faith (albeit more of the mystical than traditional nature) but he despised the idea of organized religion. His political views were radical. The hypocritical decadence of the ruling class set against the grinding poverty he witnessed every day affected him deeply (and almost got him convicted of treason in 1803) and spilled over into his art.

In 1804, Blake began work on his epic poem Jerusalem (1804-1820), his most ambitious undertaking. He began showing more of his art at exhibitions, including “Satan Calling Up His Legions” and “Chaucer’s Canterbury Pilgrims”. But no-one seemed to appreciate his work, and the one published review was unduly harsh, calling Blake’s work “nonsense, unintelligibleness and egregious vanity,” and Blake himself “an unfortunate lunatic.”

Blake took the criticism badly and stopped showing his work publicly. From 1808 to 1818 he laid low, sinking into depression and poverty. By 1819, things began to improve when he started sketching a series of mostly historical figures that he claimed came to him in visions and posed for him. 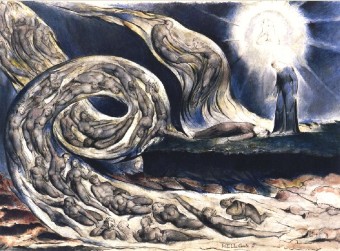 He remained busy, designing an illustrated Book of Job and Dante’s Inferno. Blake was working on watercolor illustrations to Bunyan’s Pilgrim’s Progress and an illuminated manuscript for the Book of Genesis when he died on August 12, 1827, in the company of several admiring artists and his ever-faithful Catherine.

Unfortunately for Blake, like many artists, poets and visionaries, his tremendous contribution to the arts wasn’t widely recognized until after his death.