This Day in History: August 11th- A Simmering Watts 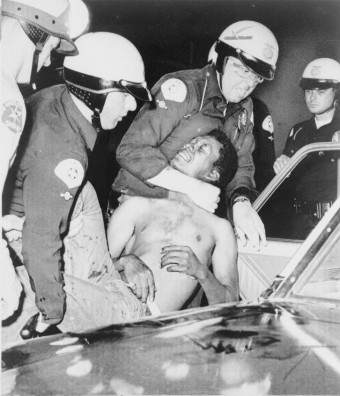 On Wednesday, August 11, 1965, a routine traffic stop resulted in a drunk-driving arrest sparking six days of rioting in the Watts neighborhood in Los Angeles. When it was all over, 34 people were dead, more than 1,000 had been injured, and nearly 4000 arrested.

It all started when Los Angeles Highway Patrolman Lee W. Minikus pulled over 21-year-old Marquette Frye, a black man from Watts, and his brother, for reckless driving. Frye failed a field sobriety test, and as the incident was only two blocks from his home, his mother heard the news and arrived to scold him for drinking and driving (in her car no less). A large crowd gathered as an agitated Marquette began to resist arrest.

One of the officers drew a gun and Mrs. Frye, fearful for her son’s life, jumped on his back. All three family members were arrested. Enraged residents of Watts started to protest as the police cruisers pulled away. Events escalated when rumors spread that the police had assaulted Marquette, his mother, and kicked his pregnant girlfriend. Chaos would reign in Watts for the next five days.

Of course, as so often is the case with these sorts of things, the actual event was just the tipping point. Just twenty years earlier as World War II was ending, half a million or so African-Americans headed for the cities of the West Coast, in the so-called “Second Great Migration,” hoping to escape the racial prejudice that plagued them back east. Unfortunately, they faced housing, employment, education and political discrimination as bad as what they’d experienced in Detroit, Boston, and New York. In fact, on the housing front, an estimated 95% of Los Angeles real estate was completely off limits to black people and Asians at the time. Beyond making it difficult to find affordable housing, this also negatively impacted these people’s educational opportunities, and also limited job opportunities close to home.

Even though the Civil Rights Act had passed in 1964, many states found ways to dilute or negate it, such as California’s Proposition 14, which attempted to undo the Fair Housing provision of the Act. This long-simmering resentment exploded with the Frye family acting as the catalyst. 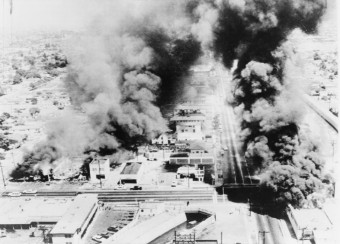 The fact that famed LA police chief William H. Parker stated that the rioters were like “monkeys in the zoo,” probably didn’t help things.

By Friday, California’s lieutenant governor felt it necessary to call in the National Guard. The next day, 14,000 troops were patrolling the area, and a curfew had been put in place.

Civil rights leader Martin Luther King, Jr. arrived in Watts on August 17. His mission was to offer support and give hope to those living in the area and to bolster the alliance between blacks and whites working together for the civil rights cause. So what did King have to say about the riots that not only caused 34 deaths and 1,000 injuries, but also resulted in 4,000 arrests and $40 million (about $300 million today) worth of property damage?

Dr. King deplored the use of violence during the riots but quickly pointed out that the root cause was ‘‘environmental and not racial. The economic deprivation, social isolation, inadequate housing, and general despair of thousands of Negroes teeming in Northern and Western ghettos are the ready seeds which give birth to tragic expressions of violence.’’

Later that fall, King stated that the city of Los Angeles should have seen the writing on the wall in an article he wrote for Saturday Review: “… when its officials tied up federal aid in political manipulation; when the rate of Negro unemployment soared above the depression levels of the 1930s; when the population density of Watts became the worst in the nation …”

But, as always, King advocated a non-violent approach. Speaking to an audience in Chicago in March of 1966 he said, “What did Watts accomplish but the death of thirty-four Negroes and injury to thousands more? What did it profit the Negro to burn down the stores and factories in which he sought employment? The way of riots is not a way of progress, but a blind ally of death and destruction which wrecks its havoc hardest against the rioters themselves.”

In the end, a government report under former CIA director John A. McCone was commissioned to determined the root cause of the riots.  As King had stated, they determined that it was a combination of inferior living conditions for African Americans, substandard schools, and high unemployment.  To remedy the situation, they recommended that “emergency literacy and preschool programs, improved police-community ties, increased low-income housing, more job-training projects, upgraded health-care services, more efficient public transportation, and many more” such programs be instituted.  However, these recommendations mostly fell on deaf ears and little was done to fix the situation. In fact, after the riots, public polls indicated that just as many people thought communists were behind the riots as that there was an actual underlying fundamental problem in the region.